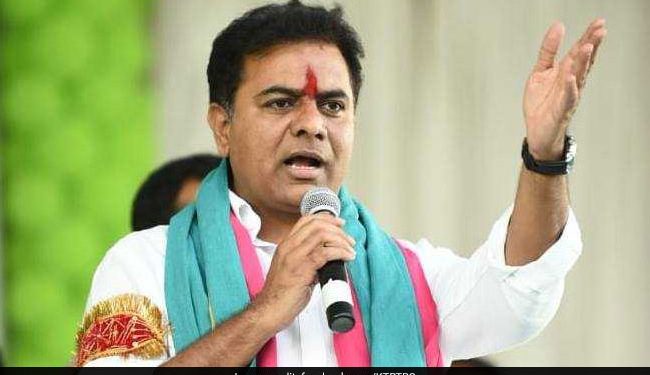 Unity in diversity is India’s strength and any attempt at “language chauvinism” will be a boomerang, Telangana minister KT Rama Rao said as he joined the chorus from the south against Interior Minister Amit Shah’s speech to propagate Hindi .

“Unity in diversity is our strength, dear @AmitShah Ji. India is a union of states and a true ‘Vasudhaika Kutumbam’. Why don’t we let people of our great nation decide what to eat, what to wear, who to wear? pray and which language to speak! Language chauvinism/hegemony will be a boomerang,” said Mr Rao, son of Chief Minister K Chandrashekar Rao.

Unity in diversity is our strength baby @AmitShah ji. India is a union of states and a real ‘Vasudhaika Kutumbam’

Why not let the people of our great nation decide what to eat, what to wear, who to pray to, and what language to speak!

“I am Indian first then proud Telugu & Telanganaite. Can speak Telugu, English, Hindi and also some Urdu in my native language. Imposing Hindi and diss English will be a great disservice to the youth of this nation who have global ambitions,” added the leader of Telangana Rashtra Samithi, popularly known as KTR.

Mr Rao’s comments come against the backdrop of a backlash from the south after Mr Shah fought for steps to increase the importance of Hindi at a meeting of the Parliamentary Official Language Committee.

“Hindi should be accepted as an alternative to English and not to local languages,” he said, adding: “unless we make Hindi flexible by accepting words from other local languages, it will not be distributed”. Mr Shah said the time has come to make the official language an important part of the country’s unity.

Following his remarks, a large number of opposition leaders have spoken out on the issue, with the loudest protest voices coming from the south.

The chief minister of Tamil Nadu, MK Stalin, warned that a push to impose Hindi will destroy India’s integrity: “Does Amit Shah think Hindi states are sufficient and other states unnecessary? integrity.”

He accused the BJP of continuing efforts to harm India’s pluralism and warned: “Do not repeat the same mistake, you will not win.”

Kerala Chief Minister Pinarayi Vijayan has also slammed the center on the issue.

“India is a country known for its unity in diversity. The idea itself means accepting diversity. Our constitution has also given importance to many languages ​​in India. Most of the states have been formed on the basis of language after a long struggle. The Sangh Parivar’s agenda is not to recognize the diversity and federalism of our country, it is part of their agenda to weaken regional languages,” he said.

Other regional forces, including the AIADMK in Tamil Nadu, the Janata Dal (secular) and troops in the northeast, have rejected Mr Shah’s comments and accused the center of trying to impose Hindi.

Main opposition Congress has accused the government of trying to create mutual mistrust through “imposition” and coercion. Party leader Jairam Ramesh has said “Hindi imperialism” will be a “death knell for India”.

Against this background, a tweet from music composer AR Rahman caused quite a stir.

Mr Rahman has posted the image of a woman in white saree against a red background. The woman is seen as a representation of Mother Tamil. A line appearing as a footnote to the image comes from a popular poem by the celebrated Tamil poet Bharathidasan and signifies that the Tamil language is the foundation for the rights of the Tamil people.