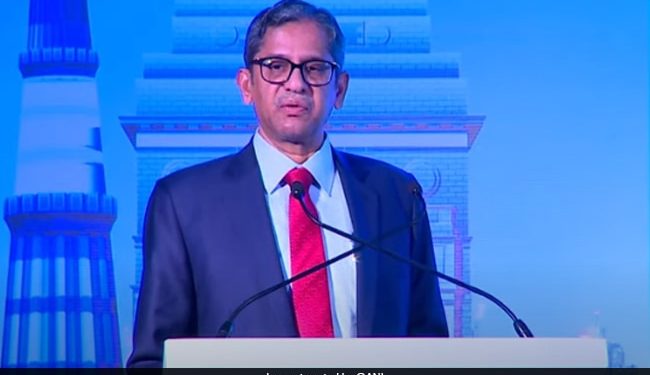 Chief Justice of India NV Ramana will retire on August 26

The Chief Justice of India NV Ramana, who will retire on August 26 after a term of office of one year and four months, said that “65 is too early an age for anyone to retire”.

He was joined on the panel by US Judge Stephen Breyer. The session was moderated by William M Treanor, Dean and Executive Vice President, Georgetown University Law Center.

When asked about the issue of the retirement age of judges, Judge Ramana said: “Yes, I think 65 years is too early for someone to retire. In the Indian judiciary, we know at the time of joining our retirement date. There are no exceptions. As for me, I still have a fair amount of energy. I am the son of a farmer. I still have some land to cultivate. I am actually a man of people. I i like to be among the people it is my nature since my college days i hope i will find the right way to invest my energy in the good of people one thing i can say for sure is that retirement in judiciary is not means I will retire from public life. I’m too busy at the moment to think about my retirement plan.”

The issue of appointing more female judges was also an important part of the discussion.

Mr Treanor complimented Chief Justice Ramana on having recommended for the first time a lawyer who is openly gay for appointment as judge of a constitutional court.

Chief Justice Ramana replied: “The first female judge was appointed to the Supreme Court after almost 40 years of its creation. We now have four female judges. This is the highest number to date. I know it is not enough. I expect more I’m glad the recent appointments and recommendations have sparked a lot of discussion about inclusiveness, I even borrowed from Karl Marx to say, “Women of the world, unite. You have nothing to lose but your chains”. This resonated well with the people. They welcomed diversity. For me, inclusiveness doesn’t stop with having more female judges. Our population is almost 140 crore. The social and geographical diversity must be reflected at all levels of the judiciary. With the widest possible representation, people can feel that it is their own jurisdiction. Diversity in the bank promotes diversity of opinion. Diversity increases efficiency. People from different backgrounds enrich the bank with their diverse experiences.”

US Judge Stephen Breyer said: “Once Ketanji gets here, there will be four. That doesn’t mean the problem is over. What you really want is for it to be normal, natural and comfortable. It’s not just for women “But minorities. I’m glad we’re going that way. If it’s completely natural, it’ll be fine.”

When asked if Judge Breyer had ever turned to Indian law, he said: “You don’t know what you’re going to learn when you start talking to judges from other countries. We were in India in 2001. “We went to Gujarat. One of the judges there showed me a building and a line of women, a line that stretched endlessly. The judge said we made this setup so that women in this area have a facility they can approach if they want to complain about something. In these rooms is a psychologist, a lawyer and a social worker and those three will figure out how to help them.”