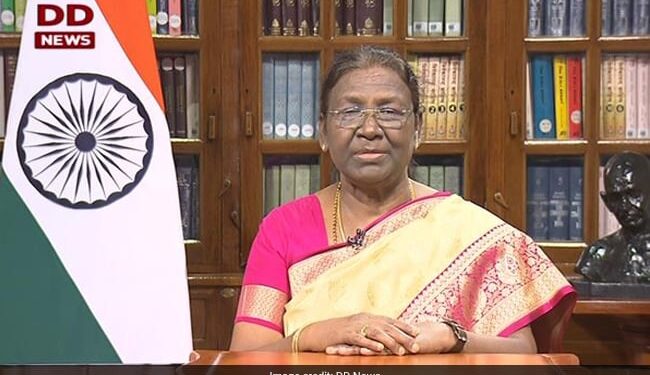 The president said ‘Azadi ka Amrit Mahotsav’ is dedicated to the people of India.

Tribal President Droupadi Murmu said on Sunday that the government’s decision last year to designate Nov. 15 as “Janajatiya Gaurav Divas” is welcome because our tribal heroes are not just local or regional icons, but they inspire the entire nation. .

“Our glorious Freedom Struggle was fought bravely over the vast territory of our country. Many great freedom fighters did their duty and passed the torch of awakening, leaving little trace of their heroic deeds. Many heroes and their struggles, especially among the peasants- The government’s decision last year to designate November 15 as ‘Janajatiya Gaurav Divas’ is welcome because our tribal heroes are not just local or regional icons, but they inspire the entire nation,” President Murmu said in her address to the nation.

“For a nation, especially an ancient country like India, the passing of 75 years is just the blink of an eye. But for us as individuals, it’s a lifetime. Seniors among us have witnessed a dramatic change in their lives. seen how after independence all generations have toiled hard, how we have met great challenges and how we have taken our destiny into our own hands.The lessons learned will help us as we move towards the next milestone in the journey of the nation – the Amrit Kaal, the 25th anniversary of the centenary of our independence,” she said.

The president said India is already on track to build an Atmanirbhar Bharat and by the year 2047, India would have fully realized the dreams of our freedom fighters.

The president said: “By the year 2047, we will have fully realized the dreams of our freedom fighters. We will have concreted the vision of those who, under the leadership of Babasaheb Bhimrao Ambedkar, drafted the constitution. We are already working on it.” with course to build an Atmanirbhar Bharat, an India that would have realized its true potential.”

The president said Azadi ka Amrit Mahotsav is devoted to the people of India.

“For 75 weeks, the nation has been commemorating these noble ideals that brought us freedom. In March 2021, we started the ‘Azadi ka Amrit Mahotsav’ with the reenactment of the Dandi March. In this way, our celebrations began with a tribute to that turning point that put our struggle on the world map. This festival is dedicated to the people of India,” she said.

She said: “Citizens of all age groups have enthusiastically participated in a series of events held across the country. This grand festival continues with the ‘Har Ghar Tiranga Abhiyan’. The Indian tricolors flutter in every nook and corner of the country. brave hearts would have loved to see the spirit of the Independence Movement come alive again on such a massive scale.”

According to a statement by Rashtrapati Bhavan, President Murmu delivered her first address to the nation on Sunday on the eve of the 76th Independence Day.

Droupadi Murmu, 64, a tribe from Odisha, was sworn in as the 15th president on July 25. It is the youngest and first tribe to hold the highest constitutional position. She is the first president to be born after independence.