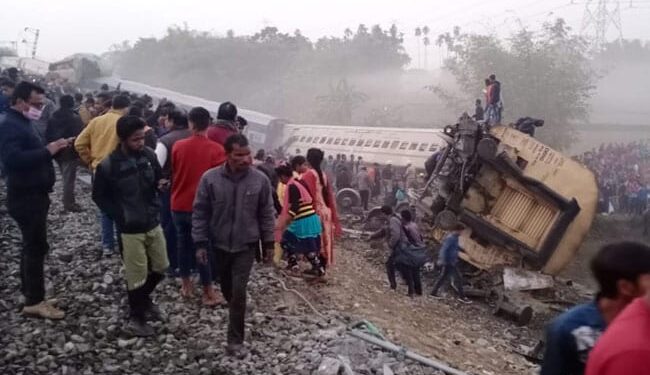 At least 12 carriages of Guwahati-Bikaner Express destroyed in Jalpaiguri. in West Bengal

Several carriages of the Bikaner-Guwahati Express train were derailed and overturned near Dohomoni in West Bengal’s Jalpaiguri district today, and there are fears of casualties.

Footage of the incident showed a number of coaches sideways along the elevated tracks while rescuers were seen trying to free the passengers.

The Jalpaiguri district administration said some injured passengers were rushed to a hospital in nearby Moynaguri.

Here are updates on the Guwahati-Bikaner Express derailment:

#UPDATE | Guwahati-Bikaner Express 15633 (up) derailed at about 5 p.m. tonight. 12 coaches have been affected. DRM and ADRM rushed to the site, along with an emergency train and a medical van: Indian Railways

Disturbing images have emerged of several passengers trapped in the rubble after a train crash in North Bengal. The Guwahati-Bikaner Express train derailed near Maynaguri town in Jalpaiguri district of West Bengal today. There are fears of casualties, railway sources told PTI news agency.

Footage from the accident scene shows people being rescued from the rubble of several damaged train cars lying sideways next to the elevated train tracks. Police can be seen on the scene, with locals and other passengers assisting in emergency and rescue operations.