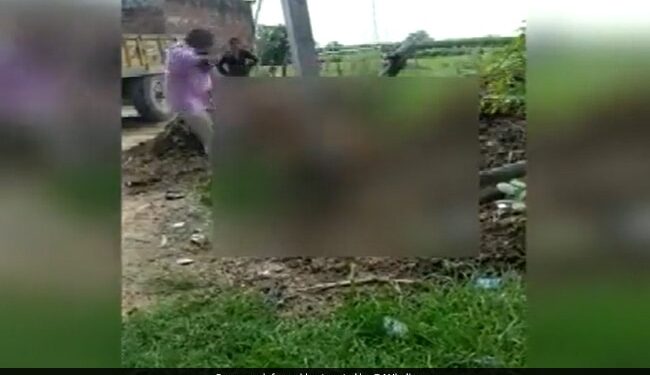 A case against the man and his mother was registered the same day.

A video showing a woman tied to a utility pole and beaten up by a man has surfaced on social media days after the incident was reported to police.

The 22-second video clip shows Shayambihari, Kusuma Devi’s husband, beating her while being tied to a pole and later dragging her behind after he releases her.

According to police, the incident took place on July 14 in the village of Arsena, located within the boundaries of Sikandra Police Station in Agra.

A case against the man and his mother was registered the same day and both suspects have been missing since then, police said.

“The man in the video was identified as Shyambihari, the husband of the victim, Kusuma Devi,” he said.

Shahi said Shyambihari and his mother, Barfa Devi, were booked under sections 323 (voluntarily hurting), 504 (deliberately abusive), 342 (wrongful detention) and 354 (unjust detention of a woman) of the Indian Penal Code ( IPC).

In her complaint, Kusuma Devi had alleged that she had been beaten by her husband and mother-in-law on July 14 and threatened not to complain about the incident to the police.

“When they heard that I had gone to the police, my husband tied me to a power pole and beat me. The video of the incident was recorded by the neighbors,” she said.