Viral video: In UP, a BJP MLA, a slap and then a clarification 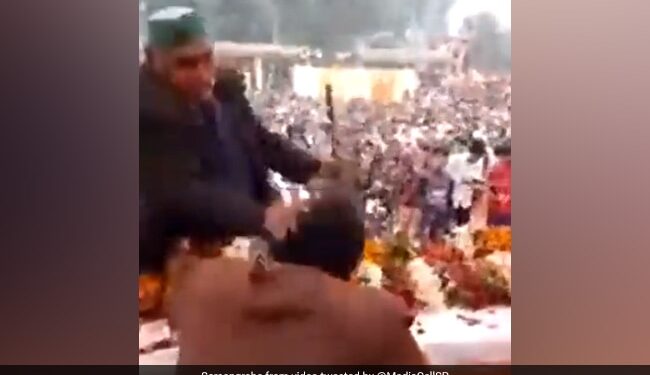 The video shows an old man punching Pankaj Gupta of the BJP, the Samajwadi party said.

A viral video from Uttar Pradesh has fed the opposition fresh food ahead of the state election to attack the government of Yogi Adityanath. When the video was widely shared, there was a quick reaction from the BJP MLA Pankaj Gupta featured in the clip being beaten by an old man. “It was just a pat on the cheek,” he later told reporters.

The 21-second clip shows Unnao’s BJP MLA onstage at an event. An old man comes close to him and then slaps him in the face. A few men then quickly surround this old man – apparently asking him for his action – and escort him as they all descend the stage.

The party tweeted the video with a dig in Hindi: “During a public meeting organized by BJP MLA Pankaj Gupta, a peasant leader slammed the MLA. This blow was not for the MLA, but for the bad policies of the BJP-led Yogi Adityanath government, poor governance and autocracy.”

…..farmer now claims he lovingly waved his hand over the MLA and accidentally hit it???? pic.twitter.com/4oFpUmciaF

But the MLA tried to clear the air about Wednesday’s clip from the event during a press conference with the old man.

In another press video, a reporter asked the old man, “You say it was just a gesture of affection, but isn’t it the wrong message?”

“I didn’t hit him. I just got close to him and asked him something, addressing him with ‘Beta (son)’.

Then the MLA intervenes: “The fact is that the incident has just been twisted by the opposition for political mileage. They have no problem. They want to show that farmers are against Prime Minister Narendra Modi. He (the old man) is just like my father . He used to do this too.”