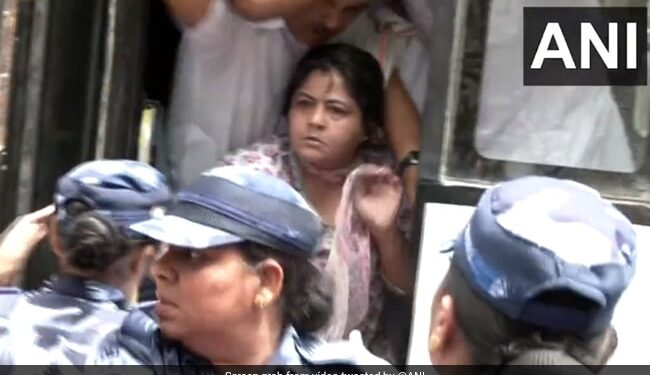 Congress leader Netta D’Souza during a protest in Delhi.

Congress leader Netta D’Souza was seen spitting on a group of officers during a protest in Delhi against the questioning of party leader Rahul Gandhi in the National Herald case. The video was posted on Twitter by news agency ANI.

Ms. D’Souza is the Acting Chairperson of the Mahila (women’s) wing of the Congress.

“Shameful and disgusting. After beating up police in Assam while holding their collars on Hyderabad, Mahila Congress president Netta Dsouza spits at police and female security personnel just because Rahul is being questioned by ED for corruption. Will Sonia, Priyanka and Rahul do something about her?” tweeted Shehzad Ponnawalla, a spokesman for the ruling Bharatiya Janata Party (BJP).

The short clip shows the congress leader spitting at security personnel from a bus when the congressmen were detained by Delhi police.

So far, neither the Indian National Congress nor the Delhi Police have issued any statement regarding the incident.

Ms D’Souza was in the news in April this year when she confronted Union minister Smriti Irani about the price hike when the two came face to face on the Delhi-Guwahati IndiGo flight. The minister had objected to being “addressed”.

The congress leader even posted a short video of the incident on Twitter in which she asked the Minister for Women’s and Child Development about rising cooking gas and gasoline prices.

The latest incident comes days after Congress leader Renuka Chowdhury grabbed a police officer’s collar during a similar protest staged by the Congress party in Hyderabad. Ms Chowdhury was charged with assaulting a police officer, but the politician told her defense that she lost her balance and grabbed the policeman’s collar to steady herself. “I lost my balance. That’s why I held that cop,” Ms Chowdhury told DailyExpertNews.

The protest was organized as part of the Congress party’s “Chalo Raj Bhavan” appeal to protest the ED’s interrogation of Rahul Gandhi. He is being questioned by the agency in connection with a money laundering case related to the National Herald-AJL deal.