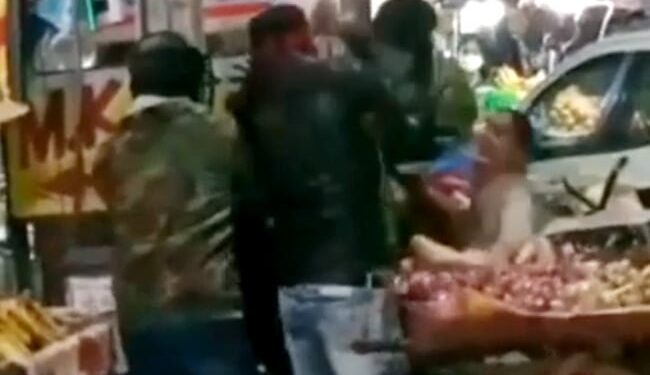 A doctor called his staff from his clinic and had the mother and son beat up.

The video of a group of men assaulting a woman in Madhya Pradesh’s Indore has gone viral on social media and sparked sharp reactions, especially as the prime suspect is a doctor.

According to reports, the incident took place on Thursday evening in the Bhanwarkuan area, where the doctor got into an argument with the vegetable seller and overturned her cart of potatoes and onions.

Dwarka Bai and her son Raju, who sell vegetables, were beaten mercilessly by a group of men.

Witnesses say the woman and her son’s only mistake was asking the doctor to move his car that he parked in front of their pushcart.

Vegetable seller in Indore, was beaten mercilessly by a group of men. Witnesses say they asked a doctor to move his car that he had parked in front of their pushcart. The doctor, furious at the altercation, called his staff from his clinic and had the mother and son beat up. pic.twitter.com/JoluHH67Lq

The doctor was furious about the altercation, called his clinic staff and had the mother and son beat up.

They then turned the cart over, causing the potatoes and onions to roll across the road.

The incident comes just days after a similar case caused a stir in Bhopal.

A female professor attacked a fruit seller and smashed his papayas on the road, apparently because the cart had grazed her car.