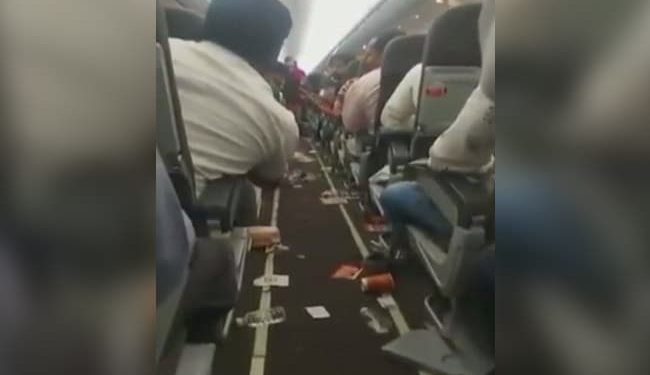 Terrifying images have emerged from the SpiceJet plane from Mumbai that suffered severe air turbulence during its descent from Durgapur airport in West Bengal on Sunday evening.

Moments of panic captured on camera showed belongings scattered across the floor of the plane and oxygen masks down as the plane made its way through the rugged stretch. Even the hand luggage fell on the passengers.

At least 17 people, including 14 passengers and three cabin crew members, were injured. Some of them suffered head injuries and received stitches, the Directorate General of Civil Aviation (DGCA), which is the aviation regulator, said. A passenger complained of a spinal cord injury.

“There were three shocks on the descent. It was more intense than what happens in a car,” described one passenger who was seen with his head bandaged.

SpiceJet expressed regret about the incident.

“On May 1, SpiceJet Boeing B737 aircraft from flight SG-945 from Mumbai to Durgapur experienced severe turbulence during the descent, unfortunately resulting in injuries to a few passengers,” the SpiceJet spokesperson said.

The DGCA said they are seconding teams for regulatory investigations. Director (Air Security) HN Mishra will investigate the incident. Awaiting medical reports from the injured.