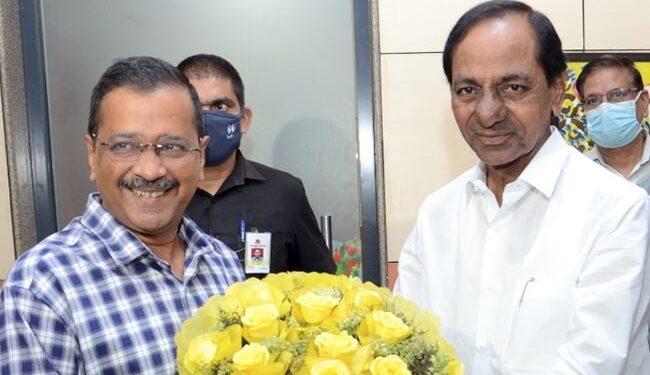 Telangana Chief Minister K Chandrashekar Rao will meet families of 600 farmers in Chandigarh today who died in the nationwide agitation against three controversial agricultural laws that eventually forced a rollback.

Mr Rao, who also met the leader of the Samajwadi party, Akhilesh Yadav, yesterday, will be accompanied to Punjab by Delhi Chief Minister Arvind Kejriwal and Punjab counterpart Bhagwant Mann.

Mr Rao will give them compensation of Rs 3 lakh each, officials said.

A day before Telangana Chief Minister K Chandrasekhar Rao’s visit to Chandigarh, Punjab Health and Family Welfare Minister Vijay Singla gave compensation of Rs 25 lakh to the families of five people in Mansa who lost their lives during the farmers’ agitation.

Meanwhile, the Telangana Congress has accused Mr Rao of “double standards” in addressing the issue of farmers. Telangana Congress spokesman Dasoju Sravan said the Chief Minister is turning a blind eye to the suicide of more than 8,000 farmers in his state.

“If he was so concerned about the farmers, why did he support the agricultural laws previously enacted by the center,” he said.

The Telangana Chief Minister arrived in Delhi on Saturday as part of his tour to attend political and social programs at the national level. He visited a government school in Delhi yesterday and said his government will set up model schools in the southern state, following the example of Delhi.

On May 26, Mr Rao will meet former Prime Minister HD Deve Gowda in Bengaluru. Then the next day he goes to Ralegan Siddhi in Maharashtra to meet social activist Anna Hazare.

He will then visit West Bengal and Bihar to meet the families of the soldiers killed in Galwan Valley during a standoff with China, an official release said.

With Telangana firmly under his belt, the political craftsman now seeks a greater place for himself in national politics, should a non-BJP, non-congress front materialize amid growing aspirations of regional satraps who want to steal a piece of New Delhi’s power pie in the keep an eye on.