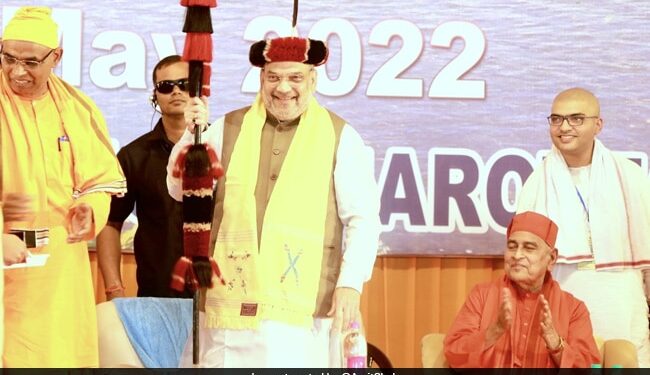 Amit Shah said efforts are underway to equip the country’s youth to compete on the world stage.

Home Affairs Minister Amit Shah said today that the new Education Policy (NEP) was drafted with the aim of making the country’s youth “competent enough to hold out in all spheres of life”.

Prime Minister Narendra Modi introduced the NEP on the occasion of 75 years of independence based on human values ​​and education along with scientific approach and artificial intelligence, the interior minister said during the Golden Jubilee celebrations of the Ramakrishna Mission School in Narottam Nagar here in Tyrap district. †

The 2020 new education policy includes observations from Swami Vivekananda, a philosopher and disciple of Sri Ramakrishna Paramahansa and founder of the Ramakrishna Mission 125 years ago, he said.

He quoted Swami Vivekananda’s philosophy on education and said that it is the medium to make people intelligent, to bring out the inner strength of the people and give it a direction.

Amit Shah called the 21st century the “century of knowledge” and said efforts are being made to make the country’s youth competent enough to be on an equal footing with people around the world.

He praised RKM, saying, “Treating patients in its hospitals and providing quality education has shown exemplary dedication to what the nation salutes,” he said.

He also praised the contribution of RKM in the education sector and the socio-cultural life of the people of Arunachal Pradesh.

“The people of Arunachal Pradesh show a real sense of patriotism that can be seen when they greet people with the words ‘Jai Hind’ instead of the usual ‘namaste’. This uniqueness is not seen in other parts of the country. honor goes to Rama Krishna Mission for instilling patriotism among the people of the state,” he said.

Building a temple is a noble task, but establishing a school and imparting knowledge to the people is more valuable, said Amit Shah. “Fifty years of exemplary service by RKM in the state is remarkable and I salute the monks for their devotional service to humanity despite adversity,” he added.

Arunachal Pradesh, he said, has been struggling for decades and the challenges are gradually being overcome. “But the state was never affected by the problems because RKM has been providing its service to the state for the past 50 years. In those places where RKM reached its reach, it has made a significant contribution to the preservation of the local culture and heritage, dialects and religion,” he added.

“Arunachal Pradesh is proudly moving forward today along with its rich culture and traditions, which is only possible thanks to the unconditional support of RKM,” said Amit Shah.

The state has maintained cordial relations with the Center despite challenges and with the coming to power of the National Democratic Alliance (NDA) in the Center in 2014, Prime Minister Narendra Modi had shifted the perception of New Delhi to the northeast.

“During the eight-year journey of the BJP-led NDA government, the Prime Minister has reduced the distance between New Delhi and the Northeast, treating the region as an integral part of the country previously unseen.” No former prime minister had visited the northeast in a short space of time as often as Modi, who has visited more than 50 times in the past eight years, he said.

“With good road, air and rail links in addition to infrastructure development, Modiji has connected the northeast with the rest of India,” added Amit Shah.

The Home Secretary, who is on a two-day visit to the northeastern state, also unveiled an 18 ft statue of Swami Vivekananda in the school building, alongside the inauguration of the new hostel building and administrative block.