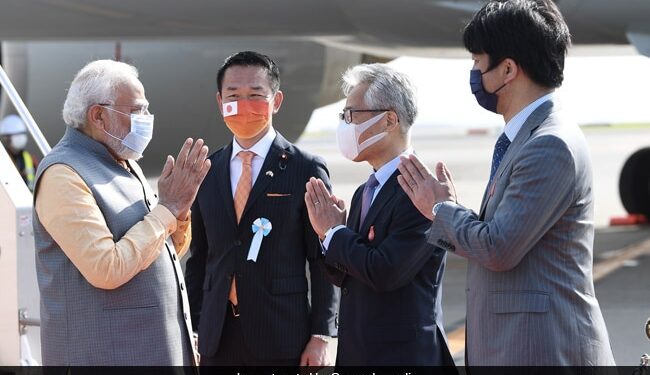 PM Modi In Japan: PM Modi arrived in Tokyo at the invitation of the Japanese PM Fumio Kishida.

When Prime Minister Narendra Modi began his two-day visit to Japan on Monday, he underlined the importance of closer cooperation between India and Japan and said this partnership is an important pillar of a stable and secure Indo-Pacific region.

The Prime Minister arrived in Tokyo today at the invitation of Japanese Prime Minister Fumio Kishida. His visit includes the Quad Summit, meetings with other Quad leaders, interaction with Japanese business leaders and the vibrant Indian community.

Upon his arrival, he was enthusiastically received by the Indian community at Hotel New Otani, where he will stay during his trip.

“The Indian community in Japan has made pioneering contributions in several areas. They have also stayed connected with their roots in India. I thank the Indian diaspora in Japan for the warm welcome,” Prime Minister Modi said in a tweet.

“Closer cooperation between India and Japan is vital in the post-COVID world. Our countries are committed to upholding democratic values. Together we are the main pillars of a stable and secure Indo-Pacific region. I am equally happy that we work closely in also different multilateral fora,” he added.

In another Twitter post, the Prime Minister recalled that he had the opportunity to interact with the Japanese people since my days as Chief Minister of Gujarat. “Japan’s development steps have always been admirable. Japan is partnering with India in key sectors including infrastructure, technology, innovation, start-ups and more.”

PM Modi also wrote an op-ed about the vibrant relations between India and Japan. “Ours is a partnership for peace, stability and prosperity. I follow the journey of our special friendship completing 70 glorious years.”

In his statement of departure on Sunday, he said that at the Quad summit, leaders will once again have the opportunity to discuss various initiatives and issues of mutual interest.

The leaders will review the progress of Quad initiatives and working groups, identify new areas of collaboration, and provide strategic guidance and vision for future collaboration.