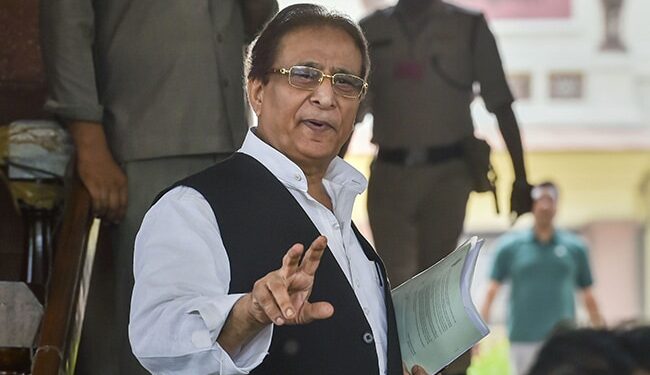 Eknath Shinde was sworn in as the new prime minister of Maharashtra. (File)

After rebel Shiv Sena MLA Eknath Shinde was sworn in as the new Chief Minister of Maharashtra and Bharatiya Janata Party (BJP) leader Devendra Fadnavis as the Deputy Chief Minister, Samajwadi Party leader Azam Khan said on Thursday that democracy has been put at risk. and the people are forced to be “deaf, dumb and blind”.

Azam Khan said, “What happened in Rampur happened in Maharashtra. I don’t see such politics because I’m blind, can’t comment on it because I’m stupid, can’t hear it because I’m deaf. What to speak in a democracy like this, where the common people are forced to be deaf, dumb and blind. We can only be sad about it.”

When asked about the new government of the Shiv Sena-BJP alliance, he said: “We will watch. The people responsible for the political situation in Maharashtra will be the ones who answer the people.”

Eknath Shinde, who led a revolt against Shiv Sena that led to the collapse of the 31-month-old government of Maha Vikas Aghadi (MVA), was sworn in as Chief Minister of Maharashtra on Thursday evening.

He was administered the oath by Governor Bhagat Singh Koshyari at the Raj Bhavan in Mumbai. BJP leader Devendra Fadnavis was sworn in as deputy chief minister. After taking the oath, Mr Shinde and Mr Fadnavis held the first cabinet meeting of the new government in Mumbai yesterday.

Later, Home Affairs Minister Amit Shah said in a tweet that Devendra Fadnavis has decided to join the new government in Maharashtra for the sake of the people of the state, following a word from BJP chief JP Nadda congratulating him with his decision.

He said in a tweet that Mr Fadnavis has shown a “big heart” and that the decision reflects his true devotion and service to Maharashtra.

“On the word of BJP chief JP Nadda, Devendra Fadnavis, with a big heart, has decided to join the government for the sake of Maharashtra and the people of the state. This decision reflects his true devotion and service to Maharashtra I congratulate him from the bottom of my heart,” said Amit Shah.

At a press conference with Mr Fadnavis yesterday, Mr Shinde said the decision is committed to Bal Thackeray’s Hindutva and to development work in the constituencies of the 50 MLAs who support him.

“A total of 50 MLAs are with us, including 40 MLAs from Shiv Sena… We have fought this battle with their help thus far… I will not let the trust these 50 people have placed in me be damaged. let alone break that trust,” said Maharashtra Chief Minister Eknath Shinde.

“The decision we have made is committed to the Hindutva of Balasaheb and to the development work in our MLA’s constituencies. We have 50 MLAs with us,” he added.

The leader of Shiv Sena further said that although the BJP has 120 MLAs, Mr Fadnavis has not taken up the position of Chief Minister.