Wreckage of crashed Nepal plane found with 22 on board 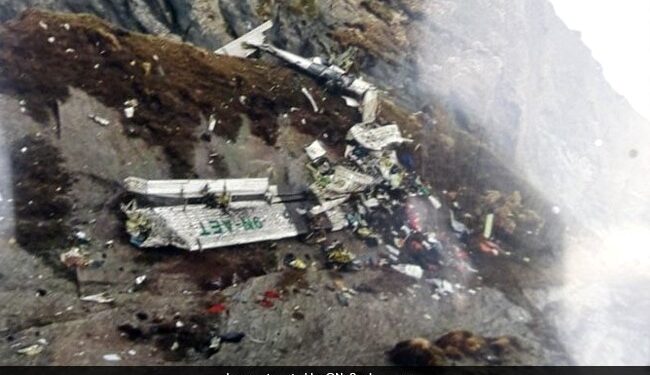 The crash site is located in Sanosware, Thasang-2 in the Mustang district.

The Nepalese army has “physically located” the crash site of the plane that went missing on Sunday, with 22 on board, including four Indians. The crash site is located at Sanosware, Thasang-2 in the Mustang district, army spokesman Brigadier General Narayan Silwal tweeted today along with the photo of the wreckage with the aircraft’s tail number clearly visible.

The fate of 22 people, including four members of an Indian family, remains unclear.

Search and rescue forces have physically located the site of the plane crash. Details are followed.

Tara Air’s turboprop aircraft Twin Otter 9N-AET had lost contact minutes after it took off from the tourist city of Pokhara at 10 a.m. Sunday.

The Canadian-built aircraft flew from the city of Pokhara to Jomsom, a popular tourist destination in central Nepal.

“The aircraft was seen over the sky of Jomsom in Mustang and was then diverted to Mt. Dhaulagiri after which it failed to make contact,” Chief District Officer Netra Prasad Sharma confirmed to ANI by phone.

The airline has released the passenger list identifying four Indians as Ashok Kumar Tripathy, his wife Vaibhavi Bandekar (Tripathy) and their children Dhanush and Ritika. The family was based in the city of Thane near Mumbai.

Vaibhavi Tripathi’s older sister has asked officials not to notify her mother because her health condition is “critical,” an official said.

Nepal’s Interior Ministry has deployed two private helicopters from Mustang and Pokhara to search for missing aircraft. Patrol and search units of security forces and groups of local residents are also on foot in the Dhaulagiri region, The Himalayan Times reported.

Mustang (from the Tibetan Muntan meaning ‘fertile plain’) the traditional region is largely arid and arid. Through this district runs the deepest gorge in the world which runs vertically for three miles between the Dhaulagiri and Annapurna mountains.

Nepal, home to eight of the 14 tallest mountains in the world, including Everest, has a record number of plane crashes.

In 2016, all 23 people on board were killed when a plane from the same airline flying on the same route crashed after takeoff.

In March 2018, a crash occurred between the US and Bangla Air at Tribhuvan International Airport, killing 51 people on board.