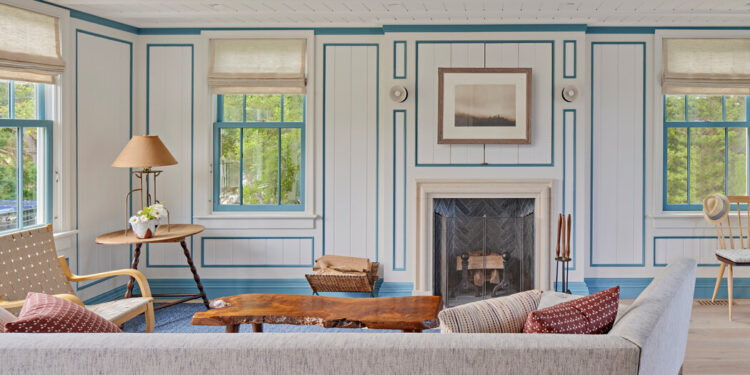 To get their ideal getaway in the Hamptons, Frank Selvaggi and Bill Shea didn’t just remodel one house — they renovated two. But that was not the original plan.

In 2015, the couple bought a small house in Amagansett, NY, for about $1 million, on a street amid sand dunes that stretched out to the ocean. The house was small – less than 600 square feet – but they didn’t think they needed much space. And even if they had wanted to expand, local building codes made it nearly impossible.

However, the structure was in dire need of work, so they hired Kyle O’Donnell, the founder of New York-based firm Gramercy Design, to rebuild it within its original footprint.

“There was no isolation. There was hardly any foundation. The rafters were too small for the roof,” said Mr. O’Donnell. ‘It was only a summer cottage, which was not held up by much. Everything had to be replaced.”

Mr O’Donnell completed the rebuilding plans, but just as construction was about to begin, the couple, now both 62, began to have doubts. mr. Shea, a freelance creative director, planned to visit the house only occasionally. But Mr. Selvaggi, one of the founders of Altman, Greenfield & Selvaggi, a Manhattan accounting and business management firm with famous clients like Anne Hathaway and Timothée Chalamet, began dreaming of living in the Hamptons almost full-time during the summer.

“I’ll be parked there as long as possible,” Mr. Selvaggi said, adding that his husband isn’t too keen on spending endless days on the sand. “He’s not a beach guy like me.”

Still, he was afraid they would feel cramped in the tiny house with their dogs, Sherlock and Dodger. So it seemed like a stroke of luck when he struck up a suitable conversation with a neighbor at a street association meeting.

“We were just chatting and I said, ‘Oh, I love the street so much. It would be great if something bigger came along,’” Mr. Selvaggi said. can’t buy me. The owner is never there.’”

Intrigued, Mr. Selvaggi tracked down the owner of the house, got in touch and found that the owner was open for sale. After some back and forth, Mr. Selvaggi and Mr. Shea struck a deal to purchase the 1,150-square-foot home for approximately $1.9 million in November 2016.

Their second home, it turned out, needed just as much work as the first, having only gotten minor updates over the years. But the idea of ​​starting two construction projects at once was daunting, so as construction progressed on the first home, Mr. Selvaggi and Mr. Shea moved into the larger one without changing anything.

At the beginning of 2018 the first house was ready. Rather than move in, the couple sold it to Anthony Bonsignore, Mr. Selvaggi’s business partner, for $1.7 million, which Mr. Selvaggi says allowed the pair to break even.

They then spent another summer in their larger, unrenovated cottage after the building permit was deferred, eventually starting their second renovation in September 2019.

As with the first project, this project involved building the house from scratch within its original footprint. But adding dormers on the second floor allowed Mr. O’Donnell to increase the size of the house to nearly 1,350 square feet, making room for three moderately sized bedrooms and two full baths.

The design includes a new ground floor terrace behind the house with a small pool and outdoor shower, a couple of terraces next to the primary suite on the second floor and a roof terrace overlooking the dunes.

The exterior of the house had previously been brown planks and battens, but Mr. O’Donnell clad the new building with cedar clapboards and lined the windows in Farrow & Ball’s Stone Blue, Mr. Selvaggi’s favorite color.

Inside, “the approach was to make it as colorful and fun as possible,” said Mr. O’Donnell, adding that he wanted to make the rooms very comfortable with materials that could withstand wet and sandy feet.

Most of the floor is bleached, wide-plank white oak. In the living room, he covered the ceiling with V-groove paneling and added panel detail to the walls, which he painted in Stone Blue. “It’s sort of a nod to a ship’s captain’s house, or something you might see in older houses out there,” Mr. O’Donnell said.

In the kitchen, which he relocated to make room for more windows, he installed teak cabinets reminiscent of those on a boat and added a White Fantasy marble countertop, back wall and window trim.

Upstairs, the primary bedroom has doors that open onto terraces on two sides: one for sitting and relaxing; the other, equipped with an outdoor shower, for sports. The training terrace also connects to the primary bathroom, which is finished in azure blue hexagonal tiles and white marble.

Construction was completed in June 2020, so Mr. Selvaggi and Mr. Shea didn’t miss a single summer at the beach. Including the furniture and interior trim, Mr. Selvaggi estimated that the project cost about $2 million.

Now, after going through so many years of building, they have no intention of going anywhere else. “It’s wonderful here,” says Mr Selvaggi, who can walk to the beach in less than a minute and enjoys catching up with the neighbors over a cocktail in the evenings.

Perhaps best of all, their new home has just the right amount of space to comfortably accommodate the couple, their dogs, and guests, without too much maintenance, he said, “It’s the perfect size for a beach house.”