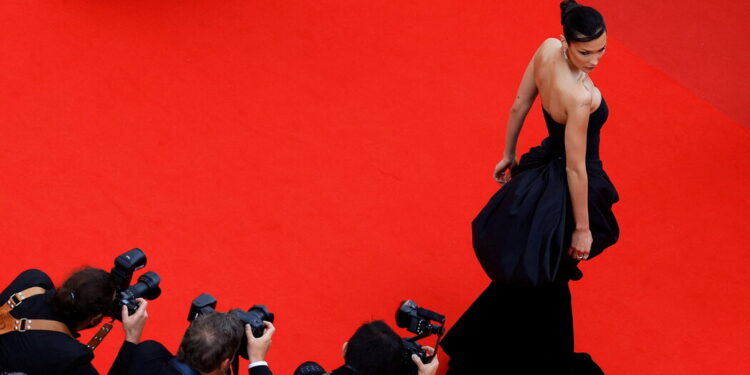 If the Met Gala has become the ultimate high-fashion costume party, the Oscars the ur-brand marketing opportunity, and the VMAs an expression of pure dress-up id, then the Cannes Film Festival, which ends on May 28, is the all- can oleo of all of the above. It’s just so long – 11 days – and so many stars of so many levels (A-list to D-list) involved, not to mention red carpets, gala dinners and related photo ops, that every possible permutation of dressing for the public eye is represented.

But amid acres of Giambattista Valli tulle, Dior princess dresses and disembodied Peter Dundas looks; amid the classic tuxedos (black and white) and aviator colors, a few standout pieces and people went above and beyond fantastic to give a lesson on this particular moment.

When Pierpaolo Piccioli, Valentino’s creative director, unveiled Pink PP, his special shade of bright pink (named after his initials) during the last Paris Fashion Week, and then decided to make virtually his entire collection in that one color, the critical response was definitely mixed. It was so… um, clear. And all mixed up.

But the show turned out to be an unexpected hit with celebrities, who have been modeling pieces from the collection on red carpets since April. As elegant as the looks are, the celebs have seemingly overlooked the fact that given how instantly identifiable, specific and dazzling this particular color is, they all look like they’re wearing the same thing.

Our coverage of the Cannes Film Festival 2022

The Cannes Film Festival returns with its signature glitz and glamour, red carpet looks and nearly 50 films projected during the event.

That’s how it ended up being Valentino Pink PP, more than any style or even star (including Anne Hathaway, Naomi Campbell, Bérénice Bejo, Katherine Langford and more) you couldn’t forget.

Between the froufrou and the penguin suits, the visual overload of entrances can often resemble macarons (especially after fasting for the past two years), and it’s easy to forget that Cannes is actually a seaside town, complete with beach and boardwalk.

So it was… well, a cinch to watch a number of celebrities embrace the coastal ethos by swapping ball skirts and tuxedo pants for shorts. Not just any old frayed jeans, of course, but more like black tie shorts. Still the right idea. Leading the way was Rossy de Palma, the head of the Caméra d’Or jury (which awards the best first feature film) who brightened it up in a black shorts suit during the opening premiere, followed the next day by a similar white look. Cooler than a mini skirt and fluffier than a maxi, they gave insecure attention throughout the occasion.

The red carpet, with all its accompanying camera lenses, paparazzi and eyeballs, has traditionally been a magnet for protest (remember the Louis Vuitton show that was crashed by a climate protester?), and this year’s festival was no exception. A female activist crashed the premiere of George Miller’s “Three Thousand Years of Longing,” stripping down to her underwear to reveal a naked torso painted in the colors of the Ukrainian flag and the message “stop us to rape”. The lower half of her body was splashed with bloody red paint and the word “scum” (the name of a French feminist collective). Although she was quickly covered and taken away by security, you can understand the motivation. Why waste all that attention on dresses?

Diving into a brand’s archives for the high-gloss equivalent of the reusable movement is becoming more common these days. (It was about time.) Sample: Bella Hadid, in collaboration with stylist Law Roach, offered a masterclass in the power of the vintage vibe through three different Versace looks. First, she attended the screening of “The Innocent” in a 1987 hourglass black issue with a giant ottoman channeling John Singer Sargent’s “Madame X.” Then she arrived at the festival’s anniversary dinner in a 2001 leather hip dress with a plunging neckline. And she happened to appear on her balcony in a 2003 corset-laced chiffon look. It gave new meaning to the phrase “this old thing.”

The much-discussed biopic of Baz Luhrmann Presley has been making waves for a while, so it’s no surprise that some of the King’s signatures have already influenced designers and the bold names they wear. Pastel tuxedos, bling bling and jumpsuits were all on hand and accounted for — and not just at the “Elvis” premiere. Given the critical reception, which at least praised the look of the film, this is just the beginning. Set up your trend-o-meters now.

Plus honorable mentions for the best dressed:

Anne Hathaway, who balanced grandeur in equal measure with the kitschy fun of the Croisette; Viola Davis, whose assortment of bright feathers made her resemble a fantastic bird of paradise; and Rebecca Hall, a member of the grand jury whose wardrobe looked like an entire fashion week in miniature.