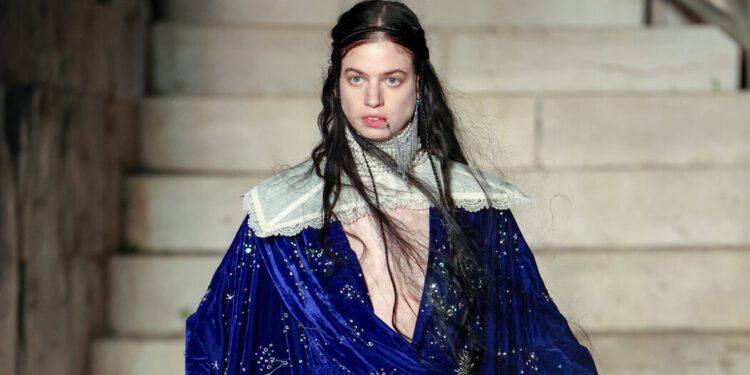 How did the paradox of the universe, full of prismatic galaxies and endless emptiness, arise? How can the light of a dead star still shine? What legends do we tell ourselves to explain the figures we see twinkling in the night sky?

What the hell does this have to do with fashion?

Apparently very little. But when it comes to the mind of Alessandro Michele, Gucci’s creative director, everything. It contains universes of its own, full of swirling chiffon and lamé, baseball caps and nerdy glasses, entire galaxies of sequins and suits, plus random philosophical black holes into which everything gets sucked every now and then. Not to mention a slew of high priests and priestesses like Jared Leto and Dakota Johnson who dedicated themselves to modeling his particular brand of sartorial mythology.

At least that became clear on Monday when the annual Gucci cruise show ritual took place in Puglia, Italy, at the Castel del Monte in the light of the moon. A 13th-century military castle on the edge of the Adriatic Sea, created as a kind of paean in stone and octagons to humanistic principles and both Eastern and Western traditions, it is also a UNESCO World Heritage Site.

Yes, less than a week after Louis Vuitton unveiled its cruise collection at the Salk Institute in San Diego, here was another resort show in a rarely seen architectural masterpiece of great aesthetic and intellectual significance.

Dubbed “Cosmogony,” the Gucci collection, according to show notes, was inspired not only by the title’s “study of the evolutionary behavior of the universe” (at least as Britannica defines it), but also by the German philosophers Walter Benjamin, of ‘The Work of Art in the Age of Mechanical Reproduction’ and Hannah Arendt, the desire to collect the meaningful quotes of others and the whole idea of ​​’constellation thinking’. That is, connecting past and present to create ‘previously unknown configurations of reality that can break through the limitations of tradition’.

Oof. Have it? To some extent, it’s just a fancy way of explaining what fashion always does: thinking in the future, helping the past evolve. But in the hands of Mr. Michele, it’s also a literal practice that essentially means wacky new combinations of otherwise familiar clothing that explodes a bunch of old social rules about who gets to wear what and when.

Granted, if you’ve been following his work since he started his Gucci revolution in 2015, his smash-ups don’t look all that new. But they still have their own appeal and energy.

Against the towering towers of the medieval castle and the mellow sounds of the voiceover of the Apollo 11 moon landing in 1969, stood an elaborate old Hollywood burgundy velvet gown, adorned with silver roses—and a diamond-shaped cutout at the midriff to reveal the navel – combined with “bug-eye shades.

There were thigh-high gladiator leather boots beneath sheer dresses that sweep the floor that barely veiled the skin beneath, or shaggy faux fur. Latex opera gloves with almost everything. Chain-mail capes on top of button-up shirts. Extensively inlaid and embroidered denim. Detachable Pierrot collar and strawberry purses. Finally an inky blue dress with Orion’s Belt and the Big Dipper and Cassiopeia twinkling on top.

The constellations had landed! A small step for a wardrobe. A giant step to redefine our obsession with stars. The scientific, not human, kind.