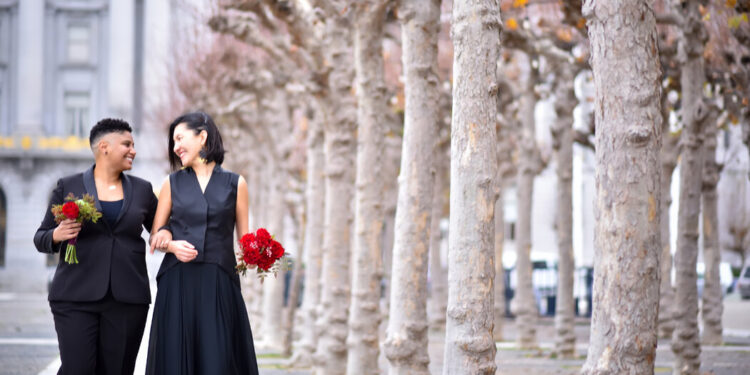 When the two decided to meet for dinner one night after the conference, both assumed it was a professional invitation. But by the end of the meal, the fluid conversation became decidedly personal. Both left the diner dazed. “Meerim is beautiful and intelligent, a great conversationalist and always brimming with ideas,” said Ms. Adams.

But romance presented challenges: they lived thousands of miles and an ocean apart, and their backgrounds were vastly different.

In 2005 Mrs. Adams joined the Peace Corps and was posted to Kenya on a two-year commitment. She then stayed there for another five years to do advocacy for LGBTQ rights. She returned to the US in 2011 and enrolled at the University of California, Hastings College of the Law, where she received a law degree. Ms. Adams is now a State Department program officer at the Office of Democracy, Human Rights and Labor in Washington.

Ms. Ilyas, now 44, from Bishkek, Kyrgyzstan, grew up in mountainous Central Asia. In 1997, as a 17-year-old high school graduate, she was awarded a scholarship to attend a community college in North Carolina.

With her limited English skills, which she learned from outdated British textbooks, Mrs. Ilyas lived with two host families, one white and one black. But as a Central Asian with a Muslim background, she didn’t fit anywhere, she said.

After the conference, Ms. Adams and Ms. Ilyas spent the rest of 2019 arranging international meetings, mixing business with pleasure whenever possible. In March 2020, as the pandemic hit, Ms Ilyas traveled from Ireland to visit Ms Adams in Washington, just as the coronavirus lockdown began.

Despite some nervousness, they decided to quarantine together. “Maheisha is practical and grounded and the best listener I have ever known,” said Ms. Ilyas. “Staying in the US for her was a risk I was willing to take.”

In April 2021, Mrs. Ilyas proposed to Mrs. Adams with a necklace engraved with the Persian word for ‘my soul’. Mrs. Adams’ father is Iranian; the necklace was both a nod to him and to Mrs. Ilyas’ roots.

Before the ceremony, the two unfurled a large Progress Pride flag as they posed for photos in the City Hall ceremonial rotunda, prompting a duo of sheriffs to politely inform them of a rule banning political signs. But it was too late. The pictures had been taken and love had won the day.