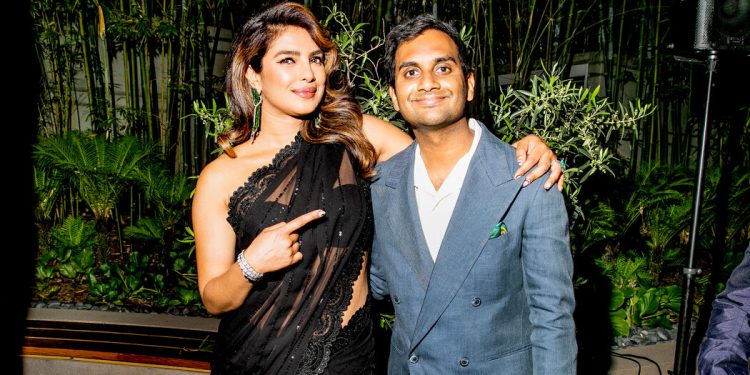 BEVERLY HILLS, California – The dirty secret of partying in the movie industry is that they’re rarely fun. Hardly anyone feels like they belong to the in-crowd. There is a lot of posing, peacocking and working on your phone.

The opposite was true at a party to celebrate South Asians’ performance in this year’s Oscars race on Wednesday night.

Three weeks ago, Maneesh K. Goyal, a restaurateur from New York, spoke with Anjula Acharia, the manager of Priyanka Chopra Jonas, and Shruti Ganguly, a film producer. “We realized there were 10 Oscar nominees of South Asian descent this year,” said Mr Goyal. “My immediate response: ‘We should have a party.'”

“I wasn’t sure if we were going to be in a conference room or something,” said Richa Moorjani, a star of “Never Have I Ever,” who wore an embroidered blazer and matching pants from a Dubai label called OTT.

No beige carpeting here: At around 5pm, guests filtered into an airy courtyard with a gazebo decorated with gold garlands. They were proud to be in each other’s presence. “To have so much talent, to have enough nominees to throw a party, this wasn’t the case five years ago,” said Ms Bajaria. “It’s not just writers, directors and on-screen talent. There are agents, assistants and executives” – like themselves – “who have the green light.”

While Mrs. Bajaria surveyed the crowd of 125, the actress Poorna Jagannathan slid over to her and grabbed her arm. “Have you seen the new Indian Barbie?” said Ms. Jagannathan, referring to the limited-edition doll released for Women’s History Month, who Ms. Jagannathan thinks Ms. Bajaria looks like (“I’m not so sure,” said Ms. Bajaria).

Who needs plastic when real role models abound? At the bar: Vanity Fair editor Radhika Jones, in a Falguni & Shane Peacock dress, and Noora Raj Brown, Goop’s head of communications. Through the step-and-repeat: Janina Gavankar, from “The Morning Show,” in a fuchsia crop top and pants, and the comedian Lilly Singh, in a suit with fringed cuffs.

Among the streamers: Aziz Ansari, the comedian and actor who recently released a Netflix special; Manish Dayal, who stars in the medical drama “The Resident”; and Riz Ahmed, the actor and rapper, who won two Oscars this year for the short film ‘The Long Goodbye’ and the animated film ‘Flee’.

“It’s really encouraging to be surrounded by people who share your experience,” said Mr. Ahmed, addressing the party with pink stripes in the sky.

Although the party officially ended at 8am, dozens of guests lingered for another hour, even though the aloo tikki station and bar were closed.

“Many of us grew up hiding our racial identity and culture,” said actor Adrian Dev (“Westworld”), who wore a navy blue sherwani. “Now I’m the exact opposite.”