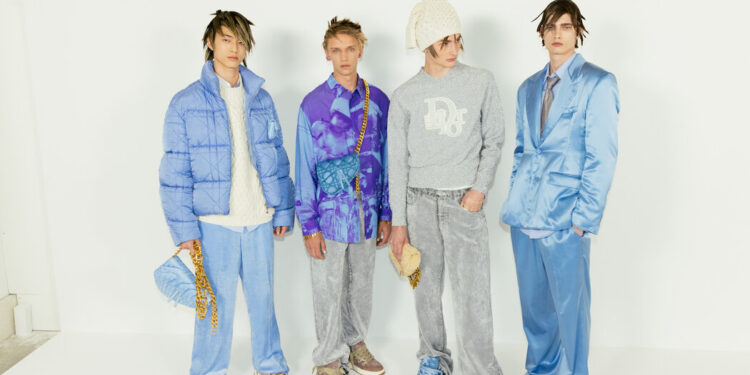 LOS ANGELES – The thing with endangered creatures is that by the time you notice they’re in trouble, it’s probably too late to get them back. The same can probably be said of subcultures. Beautiful or colourful, abnormal and strange, largely unnoticed, however different, members of subcultures consume, create, distribute and express themselves in ways that are very different from the larger dull mass of humanity, and this makes them both fugitive and special. It also tends to spell their demise.

This thought occurred to me last week in Venice, where Dior Men took over a major intersection in Los Angeles’ funky beach district, which for decades symbolized skate and surf culture to stage its menswear show. Etienne Russo, the mastermind behind the production house Villa Eugénie, painted the street blue and created a 30-foot cloth wave backdrop for the event — a one-night stunt, or a 10-minute stunt if you ignore an hour-long wait for the action. late to begin with, months of prep and whatever surplus it took for the Dior honchos to figure out the label needed a therapeutic drip.

A California drip was prescribed. This took the form of the designer Eli Russell Linnetz of the label ERL. A fashion world Zelig, Mr. Linnetz grew up on the beach. Although he studied film, Mr. Linnetz showed up at Kanye West’s design studio and has directed videos for Teyana Taylor; was Lady Gaga’s personal photographer; dresses as soon as possible Rocky; is a finalist for the prestigious LVMH Prize; and is a quirky ubiquitous presence in the realms of style.

However, the Venice he would have known as a child of the children looked very different from the city today. While Abbott Kinney Boulevard (“AK” to locals), the city’s main commercial thoroughfare, was then a patchwork of dive bars and mom-and-pop stores, it’s now a slick stretch of upscale shopping, chic restaurants, and expensive wine bars. Yes, you can still see surfers in wet suits cycling with short boards under their arms and locals dressed in colorful tie-dye, fleece, Birkenstocks and checkerboard Vans. But the skate-rat-surf-hippie vibe that once defined the place has been largely supplanted by the cashmere hoodie chic of the brothers that transformed Venice into one of the West Coast’s premier technology hubs.

A defining element of both surf and skate culture was that day jobs were a way for the people involved in those pursuits to pay bills so you could do what you loved. (Just ask a Southern California contractor whose crew disappears when the surf runs out.) The way people dressed for those sports was improvisational, selfless, and largely driven by practicality and frugality. A surfer pioneer was hotelier Sean MacPherson’s mother, Janet, who, in the days before wet suits were commonplace, scavenged Goodwill cashmere sweaters to insulate her from the frigid Pacific Ocean. That’s the vibe Kim Jones, the creative director of Dior Men, was probably looking for when he met Mr. Linnetz offered as a collaborator.

And while the partnership yielded things that were certainly intriguing in terms of style, palette, embellishment and proportion – huge pleated trousers, bejeweled and oversized shorts, fisherman’s sweaters embroidered with pearls, marl hoodies cut in the pattern of a wave, mini sneakers so thick it looked like the wearers forgot to take them out of the box – the result left a viewer feeling gloomy

Forget the obligatory suits in quilted silk satin in Dior’s signature dove gray (and reportedly inspired by Gianfranco Ferré’s stint at the label), the essence of the show was bare-bones the tiny glittering saddlebags, worn cross-body and inspired by key chain skater purses, which cash registers around the world will sing.

Meanwhile, many local subcultures have been marginalized to the point of extinction. Venice, like so much of Southern California, is no longer a place where one can live comfortably on the outskirts. A fashion review isn’t a natural place to point to the extremes of the state’s homelessness problem, or even necessarily to note the ubiquity of Los Angeles tented camps and the fact that people are reduced to sleeping under bus shelters or highway overpasses.

Yet, as he drove to the Dior Men show, this critic passed a quintessential sight: a man wandering the road, with a blanket draped over his head as if he were a defeated warrior. It so happened that the last look in the Dior Men show was a model wearing a lavish cape and chasing something that looked like a blanket.

The visual echo was certainly unconscious on the part of Mr. Linnetz. At least I hope it was.