Trae Young: Your Hair Is an Unsolved Mystery. But a Magnificent One. 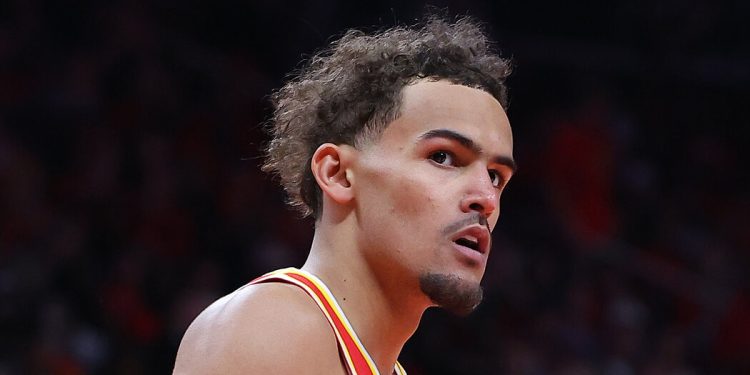 And now the matter is shelved, because the Hawks were just eliminated in Round 1 by the Heat, which means Trae Young is gone, which means so is that magnificent unsolved mystery of a haircut. I’m calling it a haircut. But that’s the thing about Young’s hair: cut where† how† This is hair so rich with paradoxical intrigue that a season of “Serial” wouldn’t be unwarranted. It’s thin yet full, short and long, wet but also dry, seemingly “young buck” despite seeming geriatric too, an optical illusion of barbering. There’s a fade, a part and bangs. It’s simply not a haircut. It’s a Michael Crichton novel.

The reason to pay any attention at all to this is that Young can be one of those thrilling, how-did-he-just-do-that basketball players, a Cubist’s rendition of a Houdini routine. On a good night, he seems to ooze between players on his way to the basket or while making passes that no regular body — no regular NBA body — should be able to. He sprays his way to the basket. Makes sense, he’s 23 and at 6-foot-1 is below the league’s average height, and therefore a squirt. But he’s got the swagger of 30 7-footers. The hair completes the thrill. It’s the fuse on a stick of dynamite, candelabra flames. The swagger’s not a secret. It’s even got a nickname: Ice Trae.

Young’s an entertainer, and the hair’s part of the entertainment. His breakaway lob won Game 3 against the Heat. In this series, the hair was full in the rear, like maybe a bustle was back there. Part of the fun of that particular game was studying how any time Young took off, the back of his head seemed to gallop full on behind him, like something you might fly to Pamplona in order to flee. Anytime he juked somebody on the Heat, the hair could seem a-twerk. After his veritable game winner, the clock was stopped at 4.4 seconds, and Young strolled to the sideline where you might have noticed that the bangs had been upended, turned back, folded over, something† On television, this short, dark coastline bore no immediate relation to the darker plume behind it. Except: of course they were related! It was a lawn in two phases: mowed and wild. It was a geologic table: Triassic and Neogene. It was a treat: cotton candy and fruit roll-up.

Everybody wants to know, what’s the point of this hair? Is it falling out? Is it being replaced? Is it still coming in? Are we looking at a technology in progress, at expensive science? Or is this simply, brilliantly, the art of nature? nobody knows. But seemingly everybody with the NBA’s app and a Twitter account would like to. Denzel Washington just wants it gone† “Tell that little boy to get a haircut,” he told Young’s Heat opponents on Sunday, after he ran into them in a hotel lobby and gave a pretty moving impromptu motivational speech. His advice for the “little boy” we all presume is poor Trae Young was just a bewildered aside: “What kind of haircut he workin’ with?” Um, Denzel: All of them! The real answer’s none of our business. I just adore how it seems to embolden Young, to make him brasher, slyer, swaggier. Or at least it did.

Last year, in Game 7 of Round 2 against the Sixers, Young was dribbling down the court at top speed when he was flattened by Dwight Howard, who must weigh what two Trae Youngs do (and, for that game, wore his hair in a golden dread mohawk that said “dancehall roster”). Down on his stomach, Young proceeded to do a set of push-ups right there on the court. One thing to love about that hair is that it doesn’t stop Young from doing stuff like that, straight trolling. The person wearing that hair wants you to think it’s going to bring him down.

Earlier in that run of the Hawks’, I’d watched them shock the Knicks in the opening game of their first-round series. We were all at Madison Square Garden and even the overjoyed, eventually crestfallen Knicks fans were, at least, appreciably flummoxed by how impossible Young looked. Slight yet entirely assured, daring, pressing, artistic. Little of that was on display this year. It was as if he was locked out of his own élan. The ‘do had lost its derring. And now it’s back at home.

I SUPPOSE WHAT some people want for Young’s hair is a Devin Booker or a Jayson Tatum. Something with obvious shape. Hair that tells a story that doesn’t require trips to a glossary or reliance on a family tree. Something to dam a critic from a flood of metaphors. Indeed, Booker, who plays for the Suns and is currently saddled with a bum hamstring, and Tatum, who’s superseded Young as this postseason’s astonishment, do have more straightforward versions of what it seems like Young “should” be going for. Booker’s hair piles into a substantial, substantially handsome box of subtle curds. (Yes, curds!) And Tatum’s waving, almost ringleted, faded incarnation, complete with a short, shaped-up front curtain, really is the Bizarro Trae. You feel like you can explain it in five words or fewer: Renaissance Cupid goes to Freaknik.

But the more time I spend with Tatum’s and Booker’s eligible-bachelor hair, the more I appreciate the gumption of Young’s. This hair is not an accident. (In fact, off-court, it’s tamed: a slick, glamorous number in a single inky shade.) Between games 3 and 4 of last year’s Knicks series, he got it cut. He did not cut if off. The back simply had less action than it had that month. Pure Ice Trae. This haircut happened in the Atlanta area, where the Hawks play. You just don’t play basketball for a team whose home also answers to Chocolate City with that hair and not know that people are going to have questions, that barbershops are likely twitching with exasperation, that as many stylists are probably waiting to jump you as Knick’s fans were. Nevertheless, he persists. Well, he did.

THE CLASH THIS MONTH between the Hawks and the Heat was exciting for its contrasting superstar hair. Jimmy Butler is the captain of Miami’s ship. For years, he’s had the single best hair in the NBA, an intricate tower of curls, twists and maybe dreads. In a league currently rich in cornrows and swinging plaits, thick with spilling meringues that may or may not require the aid of a hair sponge, there was nothing else like the control of Butler’s geyser. Every time I saw it, I wanted his hair to teach mine a class in structure, imagination and fades (fades that would tickle Mark Rothko). This did not look like easy hair to maintain. How, for instance, did he keep a consistent ratio among hair that seemed to dread, hair that twisted and hair that did something else? A delightful, loosely instructive video exists of Butler’s first post-NBA-bubble haircut after the Lakers had beaten the Heat in the finals.

and now? Well, that videos an index of a glorious, bygone era, because all season he’s been playing with his hair braided. In poured inevitable comparisons to Allen Iverson’s cornrows. What Butler’s got going on is more artisanally illustrious than Iverson’s, which, nevertheless, remains the yardstick by which all other braided basketball hair is measured. He’s its Xerox, its Kleenex. Butler’s new hair, which is seemingly redone for each game, achieves grandeur (rivers, rivulets, lightning bolts, sculptures, crop circles, braids that clasp behind his head in a bunlet that rests just above the headbands he’s been playing in). This hair is a clear kick for him. There it is in another Michelob Ultra ad as its owner croons “I Only Wanna Be with You.” but me? I only wanna be with that box.

So it felt fitting for this new hair to meet Trae Young’s in a playoff series. It’s got a clear purpose that isn’t all business and yet, in its way, is serious. And it must be said that Young’s does seem to be figuring itself out. Still, I remember what happened last year, going from Young’s Hawks to some other game. I was bored. After four quarters of Trae Young, everything else felt… flat. With him gone, it’s not all gloom. hard! The juicy Round 1 series between the Grizzlies and the Timberwolves is both an action franchise and a hair convention. It’s just that Young is a convention of one.

Of late, Denzel Washington has become a meaningful font of fatherly wisdom. But on Trae Young’s hair, we must part. I don’t want it to change, although it probably will. It’s become too much of a thing. This has been hair that’s felt like it’s on its way somewhere, anyway; and I want to pay my respects before it gets there. Hopefully, its arrival won’t be too drastic. Young might owe his swagger to that hair, given the defiance required to wear it that way — those ways. It flies and swings and bounces and struts. It can do that thing that Mick Jagger does onstage, where he whips around as if to see who’s tapped him on the shoulder. It’s a source of amusement, confusion, awe and strength. It’s biblical that way. Cut that hair and a city might fall.