Flights canceled to quiet the skies for Queen’s funeral 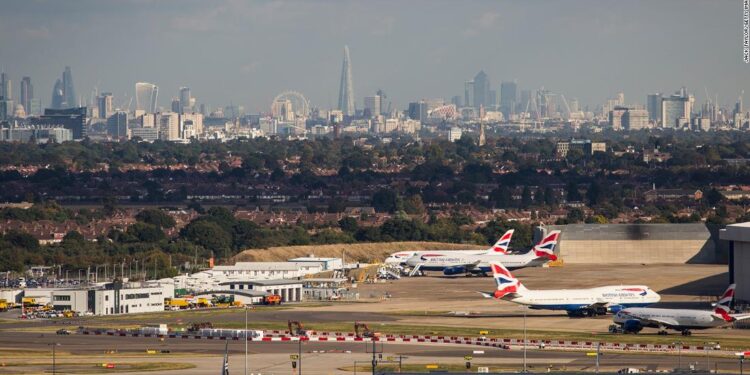 
(DailyExpertNews) — Flights to and from London’s Heathrow Airport on the day of the Queen’s funeral are being canceled or adjusted “as a sign of respect” for the late monarch.

In a statement released Thursday, the UK’s busiest airport confirmed it would make “appropriate changes” to operations “to avoid noise pollution” during Queen Elizabeth II’s state funeral at Westminster Abbey and the Committal Service at Windsor Castle on Monday.

The operational changes, likely to affect thousands of passengers, have been made to ensure “quiet skies” at certain times of the day and will affect approximately 15% of Heathrow’s schedule.

There will be no aircraft movements at the airport for 30 minutes between 11:40 AM and 12:10 PM (GMT) to ensure there is no disruption during a two-minute silence at the end of the funeral.

Meanwhile, departures will be “reduced” from 4.45pm to 9pm during the service at St George’s Chapel.

“To take into account these moments on Monday, airlines will have to adjust their schedules accordingly, which entails some changes in flights,” said a statement from Heathrow.

“Passengers affected by these changes will be contacted directly by their airline regarding their travel plans and available options.”

Flights will also be diverted around Windsor Castle, located about 12 miles from Heathrow on the day “to minimize noise during private family service and funeral.”

Meanwhile, Virgin Atlantic has emphasized that while “the vast majority” of flights are scheduled to operate normally, there will be some adjustments to “restrictions” during the state funeral and ceremony.

A number of shops at Heathrow Airport will also close on Monday, which has been declared a public holiday in the UK.

“As a sign of respect for Her Majesty Queen Elizabeth II on the day of her state funeral, we have shortened our schedule and adjusted some flights at Heathrow to ensure calm skies at certain times on Monday, September 19,” reads a statement. statement from British Airways.

“Our thoughts remain with the royal family and the nation.”