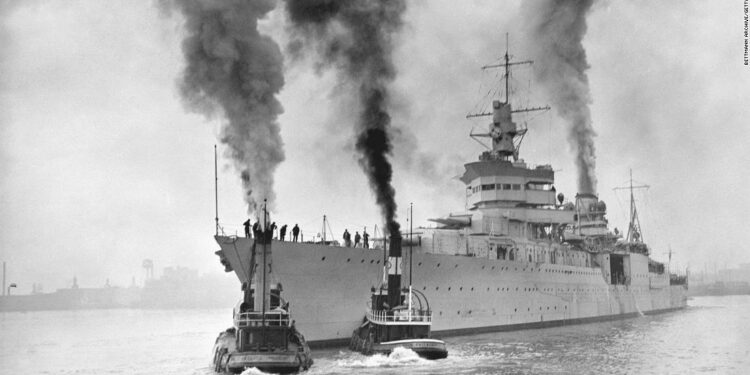 Editor’s Note — Monthly Ticket is a DailyExpertNews Travel series that highlights some of the most fascinating topics in the world of travel. In October, we shift our focus to the unusual, highlighting everything from (allegedly) haunted spaces to abandoned places.
(DailyExpertNews) — In March 2022, the world heaved a collective sigh when the remarkably well-preserved shipwreck of Ernest Shackleton’s HMS Endurance was discovered nearly two miles under the icy Antarctic seas.

But dozens of sunken ships remain on the ocean floor, awaiting rediscovery.

Here are some of the world’s most infamously elusive shipwrecks, plus a few you can see for yourself (some without even getting wet).

A humble cabin boy was blamed for the sinking of Christopher Columbus’ flagship Santa Maria off the coast of Haiti on Christmas Eve 1492. The inexperienced sailor is said to have taken the wheel after Columbus took a nap, and soon after wrote the ship by writing crash into a coral reef.

That’s at least one theory. But the Italian explorer’s ship met its fate, excitement bubbling up in May 2014, when archaeologist Barry Clifford claimed he happened upon the long-lost wreckage.

The hearts of maritime history buffs sank after UNESCO poured cold water on the claim, saying the ship found was of a much later period.

The Santa Maria is still there, somewhere.

A replica of the Flor de la Mar stands in front of the Maritime Museum in Malacca, Malaysia.

This 16th-century merchant ship — or “karak” — shuttled between India and its home in Portugal. But given its gargantuan size — 118 feet long and 111 feet high — it was an unwieldy beast for the captain.

Perhaps it was only a matter of time before the Flor de la Mar would go down, which it did during a severe storm off Sumatra, Indonesia in 1511.

Most of the crew perished and the loot – reportedly the entire personal fortune of a Portuguese governor, worth a staggering $2.6 billion in current money – was lost.

It may not have its own theme song sung by Celine Dion, but the SS Waratah is known as “Australia’s Titanic” – and for good reason.

The Waratah, a passenger freighter built to travel between Europe and Australia with a stopover in Africa, disappeared shortly after steaming up from the city of Durban in present-day South Africa in 1909 – just three years before the Titanic tragedy. As for the cause, theories abound.

The entire ship, complete with eight staterooms, a music lounge, and all 211 passengers and crew, was never found. Ninety years after the Waratah crashed, the National Underwater and Marine Agency thought they had finally found it, but it was a false alarm.

Said the late thriller writer Clive Cussler, who spent much of his life searching for the wreckage, “I think she’ll remain elusive for a while.”

Rotten Tomatoes’ “Tomatometer” might yield a raunchy 17% for the 2016 Nicolas Cage film, “USS Indianapolis: Men of Courage,” but in real life, the ship played a decisive role in World War II.

The Indianapolis was chosen to transport the uranium core from the “Little Boy” nuclear bomb to Tinian Island, where the weapon was assembled shortly before it was used to have a devastating effect on Hiroshima.

Dropping off the deadly cargo went without a hitch, but on the return voyage, Indianapolis was hit by a Japanese submarine, killing many crew members from shark attacks and salt poisoning.

The warship’s exact whereabouts remained a mystery for decades, but was finally found in 2017 by a team led by Microsoft co-founder Paul Allen – 18,000 feet below the surface of the Pacific Ocean.

A man snaps a photo of a pulley block, one of many recovered artifacts unearthed from the sunken São José.

Not just one shipwreck, but a very gruesome genre of it.

It is estimated that some 1,000 ships now lying at the bottom of the ocean were complicit in the evil “triangle trade” across the Atlantic, which forced some 12-13 million Africans into slavery.

Many of these ships sank in stormy weather, such as the São José, which sank off the coast of South Africa in 1794.

Others, such as the Clotilda, were deliberately sunk by their owners to cover up evidence of slave trade, long after the 1807 law banning the importation of slaves.

The wrecks of both ships have now been located – the São José thanks to the work of Diving With a Purpose (DWP), a group of largely black divers who dive the sites of sunken slave ships, bringing humans to the surface in rusted handcuffs and iron ballasts. .

It is impossible to retrieve such objects without also bringing up stories of human suffering, although the aim of DWP is to document the nefarious legacy of slavery and use it to educate and enlighten.

Yet such ships are notoriously elusive, and many may never see the light of day again.

Shipwrecks you can visit

Mehmed Çakir was diving for sponges off the coast of Yalıkavak, Turkey, in 1982 when he found the remains of a trading ship that sank here some 3,000 years earlier.

He was the first of many dives – more than 22,400 in fact – to retrieve the long-lost treasures of the Uluburun, and what a catch it was; 10 tons of copper ingots; 70,000 beads of glass and faience; olive oil and pomegranates stored in Cypriot pottery pots.
Part of the horde is now on display at the Bodrum Museum of Underwater Archaeology, and while not much of the Bronze Age wreck survives, there is a cross-sectional reconstruction, which gives an idea of ​​how it would have been stacked with all that goods , all those ages ago.

The Vasa is now on display in a museum in Stockholm.

Eerily intact, the 17th-century warship Vasa looks more like a prop from the “Pirates of the Caribbean” franchise, than a ship that first (and last) set sail in 1628.

The Swedish colossus made it about 1,300 meters from the harbor before sinking, only to be lifted from its silty grave some 333 years later.

A team of archaeologists (who took typhoid and tetanus shots to protect themselves from various bacteria) discovered a torso filled with 700 sculptures and decorations of mermaids, lions and biblical figures – essentially described as a “giant billboard for Sweden and Gustav II Adolf,” the fearsome king of the land of that time.

Since the opening of a special museum in Stockholm in 1990, the Vasa has become one of the world’s least elusive shipwrecks, viewed by some 25 million visitors to date.

Spyed on from the banks of the River Clyde at Greenock in Scotland, you might mistake the wreck of the MV Captayannis for a recently deceased whale.

The black hull of this Greek sugar-carrying boat, rolled on its side, is a favorite haunt for feathered residents of a nearby bird sanctuary — and has been since the ship sank in a squall in January 1974.

It is said that no one took responsibility for the so-called ‘sugar boat’, hence it is still stuck in a sandbar – an opaque reminder of the capriciousness of the sea.

Still, it’s a boon to local boat charters like Wreckspeditions, which will take maritime rubbernecks up close, pouring them a hot chocolate.

If your boat floats by diving, chances are you’ve heard of Chuuk Lagoon.

On this sprinkling of islands, 1,000 miles northeast of Papua New Guinea, the Japanese established their most formidable World War II naval base—that is, until Operation Hailstone was launched in 1944, which killed allied forces with some 60 Japanese troops. ships and planes to a seaman’s grave.

With most of them still down there, Chuuk Lagoon has become a wacky underwater museum where divers can gaze at the barnacles of the San Francisco Maru or the long-abandoned compass and motor telegraphs of the Nippo Maru.

Since the cruise ship MS World Discoverer collided with and half sank off the coast of Roderick Bay in the Solomon Islands in 2000, it has become a tourist attraction for passing ships (all passengers, it must be said, were helped to get to safety). ).

Rusting gently, on a 46-degree frame, the ship appears to have turned on its side and gone to sleep. If nothing else, count the lifeboats on your own ship as you sail past.