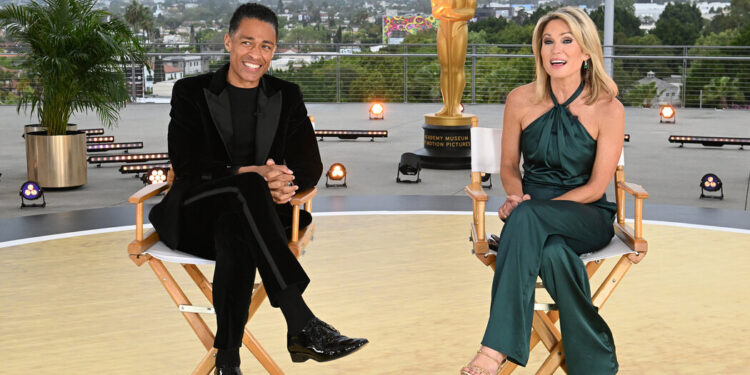 ABC News announced to staffers Monday that anchors TJ Holmes and Amy Robach had been axed from the “GMA3” talk show just days after their romantic relationship went public and became a tabloid sensation.

ABC News president Kim Godwin made the announcement during a 9 a.m. editorial call, saying the relationship had become an “internal and external distraction,” according to three people who listened to her comments.

Ms. Godwin said the relationship between the two on-air personalities, who co-anchor “GMA3”, did not violate company policy. She didn’t say how long the hosts would be off the air, or if they would return at all to the program, which is an offshoot of the network’s popular “Good Morning America” ​​franchise. She also did not say whether they would lose wages.

“I ask that we stop whispering about it in the hallways,” Ms Godwin said of the furore surrounding the hosts’ relationship, according to two people who listened to the call.

Last week, The Daily Mail reported that Mr Holmes and Ms Robach, who are both married, were having an affair. The story was filled with pictures of the anchors and the relationship soon turned into a tabloid affair.

Initially, ABC News did nothing. Ms Godwin did not comment on the relationship at two separate internal meetings that took place after The Daily Mail published her story, and both hosts sat at the “GMA3” anchor table on Thursday and Friday.

A representative for Mr Holmes and Ms Robach declined to comment on Monday. Last week, the representative said: “They had been good friends for many years, but this relationship started in recent months, after they separated from their respective spouses in August. They hadn’t told anyone, not even ABC, because they waited until they were both divorced.”