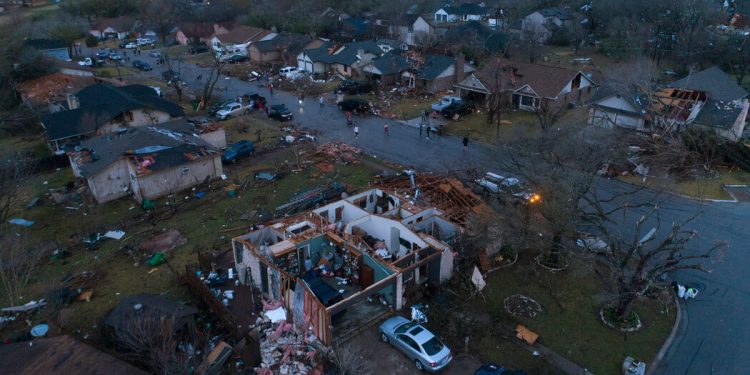 A robust spring storm system blamed for at least one death and leaving a path of destruction in Texas was expected to sweep across parts of the Deep South on Tuesday, bringing unstable weather and the risk of tornadoes.

About 3.2 million people in southern Louisiana, southern Mississippi and the western edge of Alabama were at moderate risk of severe weather Tuesday, according to the National Weather Service’s Storm Prediction Center.

Through Tuesday evening, up to two inches of rain was forecast in the region, with higher amounts possible in some areas, meteorologists said. The system rolling through the region can produce tornadoes, hail nearly the size of golf balls and damaging gusts of wind up to 70 miles per hour.

By Tuesday morning, several weather warnings covered the Central Plains and Deep South. On Tuesday, a tornado watch was issued for: large parts of Mississippi and Louisiana, including New Orleans. A flood watch stretched from East Texas to the western edge of Tennessee.

A wind advisory covered almost all of Alabama, Louisiana and Mississippi, as well as parts of Arkansas and Tennessee.

Forecasters in Louisiana warned residents Monday evening that it was time to prepare for the possibility of tornadoes ravaging the region.

“There is no safe shelter in a mobile home during a tornado,” the New Orleans Weather Service said on Twitter† “Look for shelter in a designated area within your mobile home community or seek shelter with friends or family who live nearby in a house or apartment. The last resort is to lie low and flat on the ground.”

As the storms moved east, several state offices in Louisiana were closed on Tuesday, Governor John Bel Edwards said said on Twitter† School districts across the state also adjusted their schedules, many of them closing for the day or closing early in anticipation of severe weather. Similar school closures were announced in Mississippi.

“Today will be windy with widespread rain, including severe thunderstorms that could be damaging to gusty winds, large hail and tornadoes,” the Weather Service in Jackson, Miss., said on Twitter. “Be careful!”

The system is expected to be less widespread and less intense by the time it moves across the eastern United States on Wednesday, meteorologists said.

On Monday, severe weather ripped through Texas, where a 73-year-old woman was killed when a tornado destroyed her home in Sherwood Shores, a lake community in Grayson County near the Oklahoma border, authorities said.

Sarah Somers, the district’s director of emergency management, said in an email on Tuesday that 10 other people were injured in the tornado and were being treated in hospitals.

Several tornadoes were reported in Central Texas late afternoon Monday, including in Round Rock, about 20 miles north of Austin, where a video which circulated widely on social media showed people taking cover at a Walmart as a tornado funnel slammed debris into the store’s parking lot.

In an Austin suburb of Elgin, Texas, a storm chaser captured video footage of a red pickup truck being thrown on its side by a tornado before it straightens up and drives off.