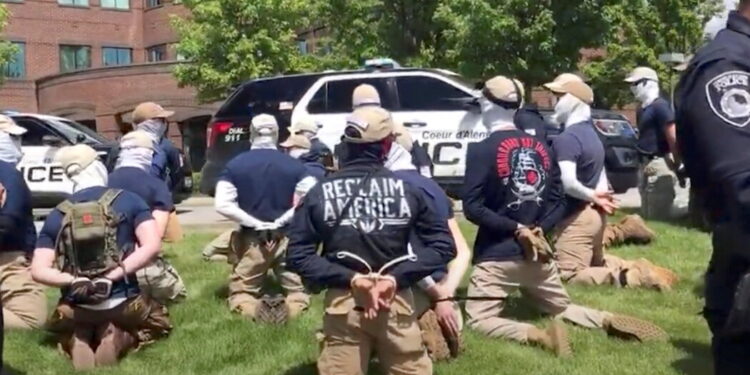 COEUR D’ALENE, Idaho — Dozens of members of a white supremacist group were arrested Saturday in Idaho before taking action against plans to protest at a local Pride event, police said.

After receiving a tip from a concerned citizen, police have detained and charged 31 people who belonged to a far-right group known as the Patriot Front, Coeur d’Alene police chief Lee White said at a news conference. .

They are charged with conspiracy to riot, a felony, he said.

Kootenai County Sheriff Bob Norris said one person reported seeing a group of people jump into a U-Haul van near the intersection of Northwest Boulevard and Interstate 90 in Coeur d’Alene.

“And they were all dressed like a small army,” Sheriff Norris said. “We had units in their area and we were able to intercept them pretty quickly.”

A few miles away, the North Idaho Pride Alliance held “Pride in the Park,” an annual event at the Coeur d’Alene City Park.

The Anti-Defamation League, which tracks extremist organizations and hate crimes, describes Patriot Front as a Texas-based white supremacist group that emerged when members of another white supremacist group, Vanguard America, broke up after the Unite the Right rally in Charlottesville, Virginia. . ., in 2017.

The arrested members had come to Idaho from several states, police said, including Texas, Utah, Colorado, South Dakota, Illinois, Wyoming, Washington, Oregon and Virginia. At least one of the members lived in Idaho, authorities said.

According to the ADL, Patriot Front regularly participates in “flash demonstrations,” which are designed to create viral video content and for which members generally wear masks and “khaki pants and a blue or white polo shirt,” and sometimes use smoke bombs.

Chief White said the detainees were wearing khaki pants, as well as arm patches and hats emblazoned with Patriot Front logos. Videos of the arrest circulating on social media show men on their knees with their hands tied behind their backs. Many of the men are masked and wear blue shirts.

“When you go online, look up ‘Patriot Front,’ which is exactly how these individuals are dressed,” Chief White said.

Many of the men also had shields and shin guards, and police recovered one smoke grenade, they said. They did not mention any other weapons.

“I have no doubt that they came to the center to revolt,” said Chief White.

Chief White denied online rumors, claiming the arrests were the result of the work of informants.

“This all came from a concerned citizen,” he said.

An apparent leader of the group had a seven-page document outlining a detailed operational plan, the chief said.

After extracting a digital image of the document, Chief White read short selections to DailyExpertNews describing how to use smoke: “a column that forms on the outside of the park and goes in, until barriers to approach have been reached” and “once an appropriate amount of confrontational dynamics has been established, the motorcade will be disarmed and head for Sherman.”

Kootenai County prison records show that Patriot Front founder Thomas Rousseau was one of the suspects in criminal conspiracy.

In the weeks leading up to the Pride event, Sheriff Norris said, “there was a lot of chatter going on” from both far-right and far-left sources about possible clashes at the gathering.

Some of it came from local groups, including the Panhandle Patriots, a far-right motorcycle club in northern Idaho. But several of those groups publicly changed their plans as fears of a violent confrontation mounted. The Panhandle Patriots have renamed a planned “Gun d’Alene” anniversary event a “North Idaho Day of Prayer.”

Chief White said he had no information at this time to suggest that local members of the alt-right or of other far-right groups were connected to the Patriot Front’s plans.

“There were people walking around the event with long rifles and pistols and bear spray and things like that,” he said. But, he added, “that’s legal in Idaho.”

Sheriff Norris described the arrests as a victory for the community and the Kootenai County Police Department. Without the actions of the police and the person’s phone call, he said, “we would be talking about a different situation.”