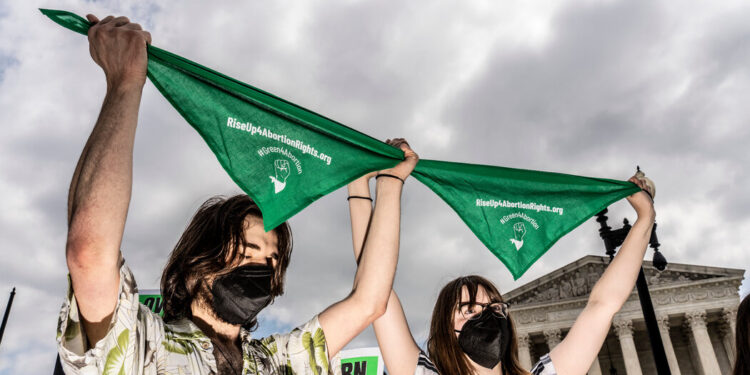 In February 2021, I uprooted my husband, three kids, and two cats from our old home to move across the country to a house we’d only seen on FaceTime, in a town we’d only known from college football. I did this because I believe that everyone who supports abortion rights should do what they can to keep abortion accessible to those who have the fewest resources to get one.

For me, that meant moving to Alabama.

It was the logical next step in the journey my life had taken since January 2019, when I first published “Handbook for a Post-Rou America,” a guide to getting or helping someone get an abortion—legally or otherwise. Last summer, Supreme Court swing vote Judge Anthony Kennedy announced his retirement. In the months following the swearing-in of Judge Kennedy’s successor, Judge Brett Kavanaugh, conservative lawmakers encouraged by a more conservative court a series of extreme anti-abortion laws.

In 2019, 12 states passed laws banning all, some, or most abortions. That wave of laws included a total ban on abortion in Alabama—since Roe v. Wade, enacted the nation’s most sweeping anti-abortion law yet. The law, signed by Republican Governor Kay Ivey, criminalized abortion providers and gave women access to abortion for life-saving purposes or in the event of a fatal fetal anomaly. Rape and incest were not offered as exceptions. The law was blocked by the courts before it could go into effect, but its intent was clear: It was drafted specifically and intentionally to challenge Roe v. Wade.

Between the Alabama law and the shift in the Supreme Court’s ideological makeup, I saw the writing on the wall for American abortion rights. So I gave up my career as a freelance reporter and traded it for work with the Yellowhammer Fund, an Alabama group that helps women pay for abortions and travel to get them. About a year later, the Yellowhammer Fund purchased the West Alabama Women’s Center, the largest abortion clinic in the state, so it would remain open after the original owner retired. I took a position there.

I have no regrets about my time here in Alabama, and I feel that the work I do makes a critical difference in the lives of the patients at my clinic and our larger community. But now that Roe has been overthrown, I know I have to adapt what my abortion activism will look like, to adapt it to the needs of this new landscape.

Roe’s overthrow is the perfect time for any abortion rights advocate to examine their own commitment to the cause and discover how they too can meet this moment. I recognize that most people can’t move across the country to help people get abortions—and frankly, they can’t, when there are so many opportunities to help in every community in the country.

Since the draft advice in Dobbs vs. Jackson Women’s Health leaked in early May, activists have traditionally seen an awareness and enthusiasm for the need for abortion rights that hasn’t been strong in decades. The focus must now be on tapping into and making that energy more sustainable. Small actions every day can reduce the damage that many experts predict to women nationally, but it will take an army of supporters to make it happen.

Here are some things an army of people can do:

Spread the word about AidAccess.org, an Austria-based group that can ship the same abortion-inducing medication we used to provide in our clinic. The site even offers pre-supply of abortion pills for anyone who wants the drug on hand before an unwanted pregnancy occurs — for themselves or someone they know. Just know that in a post-Roe world, there could be legal risks for patients living in abortion-prohibited states who order pills over the Internet.

People can also make sure others are aware of groups like the Miscarriage and Abortion Hotline, which have text and phone options to ask questions during and after a miscarriage or abortion.

Abortion rights supporters also need to protect family, friends and allies from surveillance with the Digital Defense Fund’s online security guidelines for phones and computers — especially if you’re doing something that could be seen as pushing legal boundaries.

A few other websites to keep close at hand: Reproaction offers a toolkit for organizing a protest from anti-abortion groups to prove that abortion rights advocates are just as vocal as the opponents. At INeedAnA.com you can find out how close to your nearest abortion clinic is and what the waiting times and other restrictions are if you have to deal with an unwanted pregnancy.

With so many systems to take advantage of already, the problem isn’t so much finding a way to help — it’s about maximizing impact. One person calling a local legislator 200 times could be considered harassment. But 200 people who once mentioned that legislator cannot be ignored. Likewise, a single $100 donation immediately benefits, but a recurring $10 monthly donation — especially if a friend or 20 goes with you — can provide ongoing funding an organization can rely on. A national march of a million people is making headlines for a while. But small, ongoing actions — sit-ins, vigils, an abortion rights advocate always stationed in front of the state house or courthouse — are tactics that become more powerful the longer they last.

Thinking locally will be key in a post-Roe environment where access to abortion is more than ever determined by one’s geography. You can ask your city council to support funding for abortion providers, as Chicago has proposed, or you can demand that your city council pass a resolution that ensures that people who seek abortions are not criminalized, as was recently proposed in Austin, Texas.

I believe the work I am a part of in Alabama is vital. In the past year, we’ve seen patients not only from Alabama, but also from Mississippi, Louisiana and Texas, as strict new laws and overbooked appointments have taken a toll on clinics in the South. Even with this new patient tax, we were able to register as an Alabama Medicaid provider, which allowed us to serve even more low-income patients who need birth control, basic gynecological care, and testing and treatment for sexually transmitted diseases. We have established partnerships, including with the Black trans advocacy program the Knights and Orchids Society, to provide HIV care and have created a sliding scale contraceptive program. And now that abortion is no longer legal in Alabama, our clinic will remain open to provide follow-up care to people who can arrange their own abortion.

But I also believe that the vast majority of abortion rights advocates don’t have to do what I did. With nearly half a century of abortion rights fading into thin air, it’s understandable to want to make a grand gesture in response. But instead, I’d suggest you take a breather, assess your resources, and tap into the work already being done in your community. If we all do the same thing in our communities across the country, we stand a chance of averting at least some of the worst results of a post-Roe America. That’s the job now. Let’s go there.

Robin Marty is the director of operations for West Alabama Women’s Center and the author of “The New Handbook for a Post-Roe America: The Complete Guide to Abortion Legality, Access and Practical Support.”