opinion | What Joe Manchin Cost Us 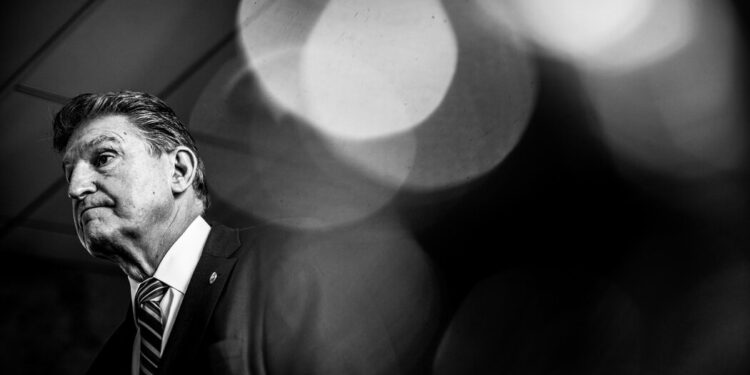 Over the past year and a half, I’ve been dissecting every comment I could find in the press from Senator Joe Manchin about climate change. With the fate of our planet at stake, his every expression had global significance. But his statements were like a weather vane, blowing in all directions. It is now clear that Mr Manchin has wasted what little time this Congress had left to make real progress on the climate crisis.

Since early 2021, Congressional Democrats and President Biden have worked relentlessly to negotiate a climate policy package. When Build Back Better passed the house last fall, it included $555 billion in clean energy and climate investments. After four decades of stalemate in Congress, Democrats were ready to finally pass a major climate bill, with the approval of 49 senators. But on Thursday, one man set fire to the deal, and with it the climate: Mr. Manchin.

By stringing along his colleagues, Mr. Manchin wasn’t just wasting the time of lawmakers. He also postponed crucial regulations that would reduce carbon pollution. Wary of disrupting delicate negotiations, the Biden administration has held back for the past 18 months from using the full power of its climate executive authority, likely hoping to get legislation first.

The stakes in delay could not be greater. Last summer, as climate negotiations continued, record-breaking heatwaves claimed the lives of hundreds of Americans. Hurricanes, wildfires and floods ravaged the country from coast to coast. Over the past 10 years, the worst climate and weather disasters have cost Americans more than a trillion dollars — far more than Democrats had hoped to spend to stop the climate crisis. With each year we delay, the climate impacts continue to grow. We don’t have a month, let alone another year or ten years, to wait for Mr. Manchin to negotiate in good faith.

Climate investments in the bill ranged from incentives for clean power such as wind and solar to support for electric vehicles. They were essential to meeting President Biden’s goal of halving carbon pollution from 2005 levels by 2030 — the United States’ contribution to limiting global warming to 1.5 degrees Celsius relative to the pre-industrial level. The failure of Congress to act means that at best with the policies we already have in place, we will only get 70 percent of the way there.

After months of stop-and-start discussions, with Mr. Manchin repeatedly walking away from negotiations, Congress is largely running out of time. Democrats are due to approve their reconciliation package this summer, and despite weeks of efforts by Majority Leader Senator Chuck Schumer and his team, Mr. Manchin has now refused to agree to climate spending. While he claimed on a talk show in West Virginia on Friday that it wasn’t over, that “we’ve had good talks, good negotiations,” this is ambiguous; he just doesn’t want to be held accountable for his actions. He has consistently said one thing and done another.

Mr Manchin’s refusal to agree to climate investments will hurt the economy he claims to protect. The package would have built up domestic production and supported more than 750,000 climate jobs annually. It would also have fought inflation, making utility bills more affordable for ordinary Americans. This is particularly ironic, as Mr Manchin said inflation was the main reason he was not comfortable supporting clean energy fiscal incentives at the moment.

According to federal documents, Mr. Manchin has taken more money from the oil and gas industry in the past year than any other congressman — including all Republicans. A Times investigation found that he also personally profited from coal, earning about $5 million from 2010 to 2020 — about three times his Senate salary. Coal has made Mr. Manchin a millionaire, even though it has poisoned the air his West Virginia constituents breathe.

As Upton Sinclair put it, “It’s hard to make a man understand something when his salary depends on not understanding it.”

But one thing I’ve never understood about Mr. Manchin is how he looks his grandchildren in the eye. While he may leave his descendants with a lot of money, they will also inherit a broken planet. Like other young people, Mr. Manchin’s grandchildren will grow up knowing that his legacy is climate destruction.

We still have a president who cares deeply about the climate crisis. It is clear that Mr. Biden intends to make rapid progress to protect Americans from pollution through executive measures. This will make a serious dent in the glaring gap we now face in achieving its crucial climate goals.

And there are 49 more senators and hundreds of representatives who understand the gravity of this moment. If more Democrats are elected this fall, especially in the Senate, we may have a window for federal climate legislation next year.

Other Democratic leaders are not waiting for Congress to intervene. California Governor Gavin Newsom signed a budget bill this month with a historic $54 billion in climate investment. New York State continues its ambitious plans to reduce carbon this decade. And in Washington state, Governor Jay Inslee is leading an all-encompassing mobilization to decarbonise: from landmark building codes to bold climate targets.

Private individuals don’t have to wait either. While the climate bill would have helped millions of Americans pay for cleaner technologies faster, many Americans can already switch.

Most electric vehicles are now cheaper to own than gas-powered cars, starting on Day 1. And the longer you drive them, the more savings you’ll make: Inflation hasn’t hit EV drivers nearly as hard as people with cars on gas. No wonder EV sales are going through the roof and many automakers are planning to go all-electric.

For those who prefer two wheels, affordable electric bikes are now widely available. And they’re fun: I jump on my own e-bike to get some exercise while shopping.

We can also work to eliminate fossil fuels from our homes, installing induction stoves and switching from gas or oil fired furnaces and hot water tanks to heat pumps. This is not only good for the planet, but also for our health. Recent scientific studies have shown that we inhale carcinogens when we cook on gas. And even when a gas stove is turned off, it still leaks toxic substances into our homes.

In the long run we are going to win. Fossil fuels are simply too expensive, dirty and dangerous.

But with climate change, speed is everything. And Mr. Manchin’s actions will slow our pace. Many of the people and places we hold dear will face the consequences of his moral corruption.

A few days ago, I was watering my Southern California garden when a hummingbird approached. It flew within inches of my hand and seemed elated when I sprayed its iridescent feathers. The West is in the midst of another climate disaster — the worst drought in more than a millennium — and the bird needed water. In its own way, this little creature told me that our hotter planet is less safe than it used to be.

Keep your kids close to you tonight. Leave some water for the birds. And make a plan to call on your elected leaders to demand climate action, dismantle your fossil fuel furnace, or buy an e-bike. The climate crisis is getting worse and Congress is one vote short of saving us. We will have to save ourselves.