The plane from China Eastern descended more than 20,000 feet in just over a minute. 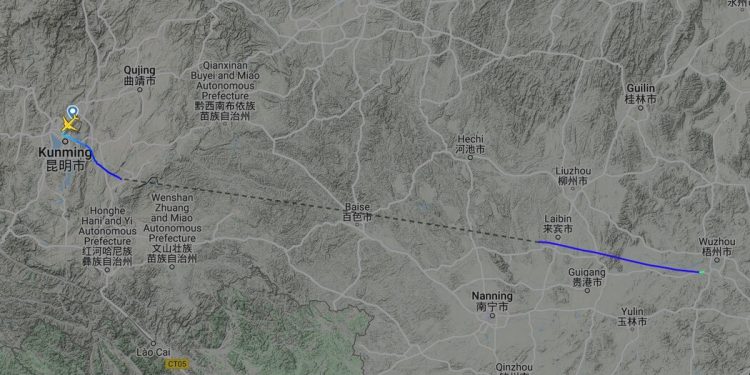 China Eastern Airlines flight MU-5735 departed from Kunming, the capital of Yunnan province, at 1:11 p.m. Monday for what should have been a one and a half hour flight east to Guangzhou, a major commercial city in southeastern China. .

However, after an hour, the flight went horribly wrong, according to data from Flightradar24, a tracking platform.

Around 2:20 p.m. it “suddenly started to lose altitude very quickly”, Flightradar24 said in a tweet†

The plane was sailing at an altitude of 29,100 feet when it lost more than 21,000 feet in just over a minute. According to Flightradar24’s data, it appeared to briefly rise again to about 8,000 feet before continuing its dive.

A Wuzhou City Beichen Mining manager, Liao Wenhui, confirmed by phone that their surveillance camera captured an image that looked like a plane crashing straight to Earth, but declined to say more.

The plane was located in the far east of the Guangxi region, where weather reports suggest no possible contributing factors. Temperatures peaked at 86 degrees Fahrenheit around 2 p.m., according to the China Meteorological Administration. The wind was moderate at less than 12 miles per hour and visibility was 10 miles. Rain was forecast for the evening, but no precipitation had been measured at the time of the accident.