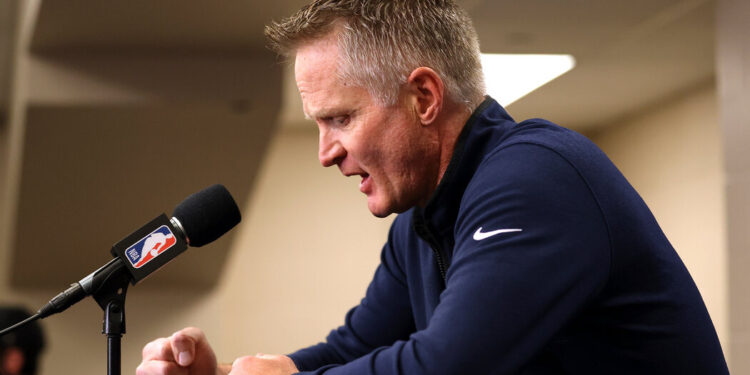 Before the big NBA game Tuesday night, there was no basketball: just frustration, anger and pain.

On Thursday, sports faded into the background, as appropriate, replaced by heartbreaking facts, courtesy of two Major League Baseball teams, and calls to do something to end the carnage.

Something is wrong in America. We don’t know how to stop aggression and death.

The massacres in Buffalo and Uvalde, Texas, have once again shocked us to the core. We brace ourselves against the scourge of gun violence that threatens every part of the country: supermarkets and churches, street corners and shopping malls, and schools filled with elementary school children.

Everyday life feels like it could turn into horror at any moment.

In the midst of all this, our games continue. Important matches with notable teams. The Golden State Warriors played their trusted brand of basketball in the conference finals of the NBA playoffs. The Yankees and Tampa Bay Rays, divisional rivals and contenders to win this year’s World Series, played an important series in St. Petersburg, Florida.

Exercise can be a tonic in difficult times. Games and great performances provide a chance to wash away terrible emotions. To move on and even forget. But hours after 19 students and two teachers were murdered in Uvalde, Golden State head coach Steve Kerr, a man who knows firsthand the suffering caused by gun violence, couldn’t completely shake us off the pain.

And the Yankees and Rays would soon come together in a way that demanded attention to what mattered—and the important thing wasn’t about wins or losses or the battle for first place in the American League East.

In the minutes before Game 4 of his team’s playoff series, Kerr sat at a table in front of reporters and let loose forcefully. Nothing he said was scripted. Everything came from the heart, shaped by personal experience. And it had nothing to do with basketball or sports.

“Over the past 10 days, elderly black people have been murdered in Buffalo, Asian churchgoers have been murdered in Southern California. And now we’ve killed kids in school,” Kerr said, his words strong enough to go viral almost immediately. His voice trembled. His eyes narrowed with burning ember emotion.

He pounded on the table, his voice rising.

“I’m tired of it. I’ve had enough. We’re going to play the game tonight, but I want everyone who listens to this to think about your own child or grandchild or mother or father, sister, brother. How would you feel if this would happen to you today?

“When are we going to do something?” he added.

Kerr has long spoken out at press conferences and other occasions in favor of tougher gun laws and against our society’s appetite for violence. He did it again this week, denouncing the politicians who do nothing and specifically ranting at the Senate for not even passing legislation as simple as a requirement for universal background checks.

At that point, looking at him was like watching a man struggle to make sense of a tragedy he knows all too well. In 1984, during Kerr’s freshman year at the University of Arizona, his father, Malcolm, was shot and killed by assassins outside his office at American University in Beirut.

Political pronouncements are rarer in baseball, still our national pastime, though the dwindling public has aged toward conservatism. Even the determined Yankees — such a tradition-bound team that they don’t even let players wear facial hair — and their division rivals worked together on a unique message. Rather than posting the usual stats and score updates during their game Thursday, both teams shared gun violence facts with millions of followers.

When they played Thursday, their Twitter and Instagram posts focused entirely on the gun death toll in this country.

Another: “More than 110 Americans are killed every day with guns, and over 200 are shot and wounded.”

Jason Zillo, the Yankees’ vice president of communications, put the messages into perspective in a text message this week to my colleague David Waldstein. “As citizens of the world, it’s hard to deal with these shootings and just fall back into a normal routine,” Zillo said. “For one night, we wanted to think and draw attention to stats that have so much more meaning and weight than the batting average.”

I’m one of the legions hit by gun violence: the suicide of a favorite great-uncle, the murder of a distant cousin, a baby, by a stray bullet in a gang shooting. My pain swims in the same deep currents that swell across America. We mourn together. Together we determine how we respond.

This week, Steve Kerr and the Yankees and Rays were there to remind us not to dive too deep into the easy distractions of sports — and that action is needed to end this madness.