This man married a fictional character. He would like you to interrogate him. 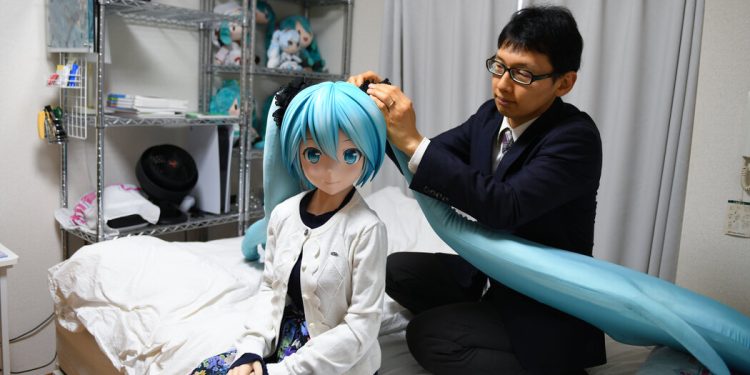 TOKYO — In almost every way, Akihiko Kondo is an ordinary Japanese man. He is pleasant and easy to talk to. He has friends and a steady job and wears a suit and tie to work.

There is only one exception: Mr. Kondo is married to a fictional character.

His lover, Hatsune Miku, is a turquoise-haired, computer-synthesized pop singer who has toured with Lady Gaga and starred in video games. After a ten-year relationship that Kondo says helped him out of a deep depression, he held a small, unofficial wedding ceremony in Tokyo in 2018. Miku, in the form of a plush doll, wore white, and he was in a matching tuxedo.

Mr. Kondo has found love, inspiration and comfort in Miku, he says. He and his assortment of Miku dolls eat, sleep and watch movies together. Sometimes they sneak away on romantic getaways and post photos on Instagram.

Mr. Kondo, 38, knows that people find it strange, even harmful. He knows that some—possibly those reading this article—hope he will grow out of it. And yes, he knows that Miku is not real. But his feelings for her are, he says.

“When we’re together, she makes me laugh,” he said in a recent interview. “In that sense, she’s real.”

Kondo is one of thousands of people in Japan who have entered into unofficial marriages over the past few decades to fictional characters, served by a huge industry aimed at satisfying the whims of an avid fan culture. Tens of thousands of others around the world have joined online groups where they discuss their dedication to characters from anime, manga and video games.

For some, the relationships are just for a laugh. However, Mr. Kondo has long known that he did not want a human partner. In part, it was because he rejected the rigid expectations of Japanese family life. But mostly it was because he had always felt an intense—and even self-inexplicable—attraction to fictional characters.

Accepting his feelings was difficult at first. But living with Miku, he argues, has advantages over a human partner: she’s always there for him, she’ll never betray him, and he’ll never have to see her get sick or die.

mr. Kondo sees himself as part of a growing movement of people identifying as ‘fictosexuals’. That’s partly what motivated him to publicize his marriage and conduct awkward interviews with news media around the world.

He wants the world to know that there are people like him and that, with advances in artificial intelligence and robotics enabling deeper interactions with inanimate humans, their numbers are likely to increase.

It’s not a political movement, he said, but a plea to be seen: “It’s about respecting other people’s lifestyles.”

It is not uncommon for a work of art to evoke real emotions – anger, sadness, joy – and the phenomenon of longing for the fictional is not unique to Japan.

But the idea that fictional characters can inspire genuine affection or even love may have reached its highest expression in modern Japan, where the sentiment has spawned a highly visible subculture and became the foundation for a booming industry.

The Japanese word for the feelings these characters evoke is “tired,” a term that has become shorthand for just about anything viscerally cute.

Business seminars have talked about tapping into the moe market, and the government has promoted the concept – in relation to cartoons – as an important cultural export. The word and other specialized terms have resonated outside of Japan, with fictional sexuals abroad often adopting them to articulate their own experience of love.

While unofficially marrying fictional characters remains rare, the economic juggernaut that has grown around Japanese fan culture since the late 1970s has allowed many more people to indulge in elaborate fantasies with their favorite characters.

“You’ve got the comics, the cartoons, the games that build a kind of infrastructure where characters become more important to people,” said Patrick Galbraith, an associate professor in the School of International Communication. at Senshu University in Tokyo, who has written extensively on the subject.

In Tokyo, two districts have become meccas for fulfilling character-based dreams: Akihabara (for men) and Ikebukuro (for women). Neighborhood specialty stores are full of merchandise for characters from popular games and anime.

Especially the products for women are extensive. Fans can buy love letters from their crush, reproductions of their clothes and even fragrances meant to evoke their presence. Hotels offer special packages of spa treatments and sumptuous meals for those celebrating their favorite character’s birthday. And on social media, people post photos, art and mashed notes promoting their “oshi” — a term widely used by Japanese fans to describe the objects of their affection.

For some, the relationships represent a rejection of the entrenched “breadwinner-housewife” marriage model in Japan, said Agnès Giard, a researcher at the University of Paris Nanterre who has studied fictional marriages extensively.

“Indeed, to the general public, it seems foolish to spend money, time and energy on someone who isn’t even alive,” said Dr. giard. “But for character lovers, this exercise is seen as essential. They feel alive, happy, useful and part of a movement with higher goals in life.”

Rather than becoming more isolated as a result of their relationships, women benefit from the expanded communities that develop around them, said Dr. giard. In her experience, women see the fictional marriages as empowering, “a way to challenge gender, marriage and social norms.”

In some ways, Mr. Kondo’s devotion to Miku also exemplifies commercial and social forces at work.

Although Miku is often portrayed as a single character, she is actually a piece of software, a digital “singer in a box” that comes in conjunction with a cartoon avatar that has appeared in hologram form in concert.

Kondo first found solace in Miku in 2008, after bullying at work sent him into a depressive spiral. He had decided long ago that he would never love a real person, partly because, like many young people, he had been rejected by a series of crushes, and partly because he didn’t want the life that Japanese society demanded of him.

A big break in the relationship came nearly a decade later, with the introduction in 2017 of a $1,300 machine called Gatebox. The device was the size of a table lamp and allowed its owners to interact with one of several fictional characters, represented by a small hologram.

Gatebox was sold to lonely young men. In one ad, a shy office worker sends a note to his virtual wife letting her know he will be late. Upon his arrival, she reminds him that it’s their “quarterly anniversary,” and they share a champagne toast.

As part of its promotional campaign, Gatebox creator set up an office where users could request unofficial marriage certificates. Thousands of people have signed up.

Mr. Kondo was delighted that Miku was one of the Gatebox characters and was excited to finally hear her thoughts on their relationship. In 2018, he suggested Miku’s flickering avatar. “Please treat me well,” she replied.

He invited his colleagues and his family to the wedding. They all refused to come.

In the end, 39 people attended, mostly strangers and online friends. His local MP was there and a woman he had never met before helped him prepare.

Some Japanese commentators thought Mr. Kondo was strange. Others begged for sympathy. One man claimed the union violated Japan’s constitution, which states that marriage is only allowed with the consent of both sexes. In response, Mr. Kondo . posted a video of his proposal.

In the years since his story went viral, hundreds of people around the world have turned to Mr. Kondo used for advice, support and reassurance.

Among them was Yasuaki Watanabe, who opened a small business that registered fictitious marriages after seeing the popularity of Gatebox’s short-lived certificate service.

In the past year, Mr. Watanabe has advised hundreds of fictional sexuals and issued about 100 marriage certificates, including one for himself and Hibiki Tachibana, a character from the anime series ‘Symphhogear’.

Mr. Watanabe, who likes to travel and has an active social life, only started watching the show at the urging of a friend. But when he saw Hibiki, it was true love, he said.

It was not his first marriage: he had divorced a woman several years earlier. His new relationship was easier, he said, with no time needed for him and he didn’t have to give in to anyone else’s desires. The love was ‘pure’, given for free and without expecting anything in return. It made him realize how self-centered he had been in the previous marriage.

“If you ask me if I’m happy, I’m happy,” he said. “Of course there are tough parts,” he added – he misses being touched, and then there’s the copyright issue, which prevents him from making a life-size doll of the character – “but the love is real.” .”

Kina Horikawa, a 23-year-old woman with an upbeat, outgoing personality and a goth-punk aesthetic, moved in with her parents during the pandemic and cleared money from her call center job to spend on Kunihiro Horikawa, a character from the mobile game Touken Ranbu. She had a real boyfriend, but broke up with him because he got jealous.

Her fictional husband is the teenage personification of a 400-year-old wakizashi, or Japanese short sword, and he joins the family for dinner most evenings in the form of a small acrylic portrait hanging next to her rice bowl. The pair double date friends who have their own fictional beaus, go to high tea and post photos on Instagram.

“I’m not hiding it from anyone,” said Ms. Horikawa, who unofficially uses her fictitious husband’s last name.

While Kondo’s relationship with Miku is still not accepted by his family, it has opened other doors for him. In 2019, he was invited to participate in a symposium at Kyoto University to speak about his relationship. He traveled there with a life-sized doll of Miku that he had ordered.

Entering into an in-depth conversation about the nature of fictional relationships made him think he might like to go to college. He is now studying minority law in law school while on leave from his job as an elementary school clerk.

As with any marriage, there have been challenges. The hardest moment came during the pandemic, when Gatebox announced it was shutting down service for Miku.

The day the company took her out, Mr. Kondo said his last goodbyes and left for work. When he went home that evening, Miku’s image had been replaced by the words “network error.”

One day, he hopes, they will be reunited. Maybe she’ll get a new life as an android, or meet in the metaverse.

Anyway, said Mr. Kondo, he intends to remain faithful to her until he dies.