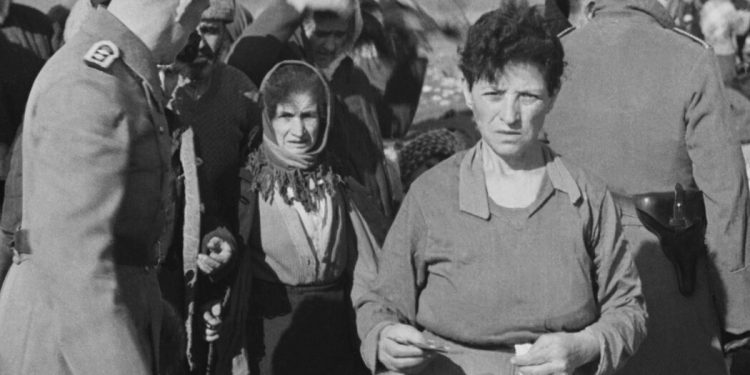 For two days in September 1941, German soldiers, assisted by Ukrainian collaborators, murdered 33,771 Jews in the Babi Yar ravine outside Kiev. The massacre was one of the earliest and deadliest episodes in what is sometimes referred to as the “Holocaust by Bullets,” a phase of the Nazi genocide that took place outside the mechanized slaughter of the death camps. These mobile assassination squads, known as Einsatzgruppen, are estimated to have claimed at least 1.5 million lives.

The new documentary by Ukrainian-born filmmaker Sergei Loznitsa, consisting of archive footage interspersed with a few concise informative title cards, is called ‘Babi Yar: Context’. What is meant by “context” is not so much a broad explanation of the event – as found in historian Timothy Snyder’s book “Bloodlands” – as a detailed visual narrative with a hole in the middle.

When the Germans invaded the Soviet Union in 1941, they brought both film cameras and rifles. So did the Soviet army when it took back Kiev in 1943. Some of those cameras were propaganda tools; others were handled by amateurs. The two sides left behind an extensive cinematic record, a pool of images that languished largely unseen since the end of the war. By weaving them together and mimicking the sound (the rumble of tanks and the buzz of crowds, with the occasional snippet of intelligible speech), Loznitsa has put together a heartbreaking and revealing collage.

The murder itself took place off camera. What is astonishing is how thoroughly almost everything that happened before and after the massacre was documented, in black and white and sometimes in color. The detail is relentless and ruthless: farms and villages set on fire by German soldiers; Jews are rounded up, humiliated and beaten; snowy fields strewn with frozen corpses; bombs explode in central Kiev; the public hanging of 12 Germans convicted of atrocities after the war.

While a military and political narrative can be inferred from all this, Loznitsa’s method (shown in previous found footage films such as ‘State Funeral’, depicting the aftermath of Stalin’s death) is to let human reality speak for itself. A few prominent officials have been identified — you may recognize Nikita S. Khrushchev, who became the leader of the Ukrainian Soviet Socialist Republic shortly after the Germans were ousted — but what the film most vividly shows is the intense individuality of anonymous, ordinary people . History is a catalog of faces: townspeople and peasants; victims, perpetrators and bystanders; Germans, Jews, Russians and Ukrainians.

Usually these people don’t talk. Towards the end, there are scenes of courtroom testimony, in which a German soldier and several witnesses and survivors talk about what happened in Babi Yar. Their words, in the absence of images, have a poignant intensity beyond what any photograph could convey. The same is true of Soviet Jewish writer Vasily Grossman’s 1943 essay, “Ukraine without Jews,” which is quoted on screen to emphasize the enormity of what cannot be shown.

Much of the rest of “Babi Yar: Context” works the other way around, finding an eloquence in actions and gestures that words may not provide. And also an element of indeterminacy, if you try to read the thoughts and feelings on those faces.

The work of interpretation that Loznitsa enforces has a political, moral dimension. After Kiev, other cities such as Lviv fall into the hands of the Germans; the streets fill with Ukrainians celebrating their victory as liberation from Soviet oppression. Girls in traditional costumes present bouquets of flowers to Nazi officers and banners are raised proclaiming the glory of Adolf Hitler and Ukrainian nationalist Stepan Bandera. When Jews are rounded up, harassed and mistreated, local citizens are ready to get involved.

Later there are processions and flowers to welcome the Red Army. The likeness of Hitler is removed and replaced by that of Stalin. You may be wondering about the composition of the crowds. Had some of the same people who welcomed the German army as liberators also come to support the return of the Soviet army? Did Kiev residents who cheered the arrival of Nazi fighters also applaud their execution?

Forcing you to think about these questions is one of the ways Loznitsa’s film brings you closer to the horror at the center, removing the easy judgment of hindsight, as well as the layers of forgetting and distortion that surround the carnage over the decades that follow. had accumulated.

And, of course, “Babi Yar: Context,” completed before the Russian invasion of Ukraine, comes in theaters with a stark context of its own. The Babi Yar Memorial near Kiev was damaged by a Russian missile in early March. Russian President Vladimir V. Putin has claimed that one of his goals is the “denazification” of Ukraine, whose current president, Volodymyr Zelensky, is Jewish. The past Loznitsa digs up casts its shadow on the present. Knowing about it won’t make anything easier, but not knowing can make everything worse.