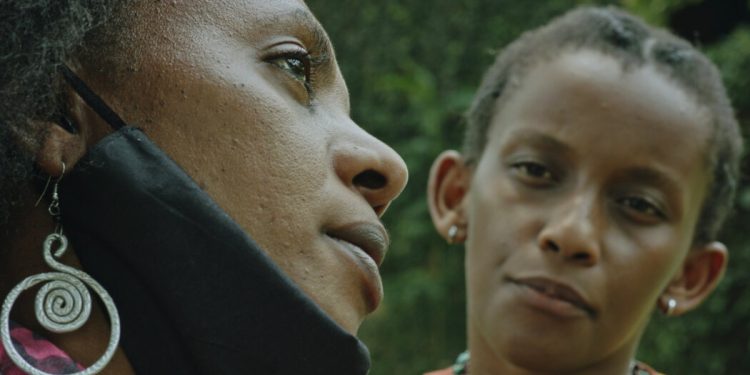 In a resilient sign of optimism – illusionary or otherwise! — This year’s new directors/new films return to theaters at full throttle. New York’s Covid numbers are creeping up again, but the festival, a joint venture between Film at Lincoln Center and the Museum of Modern Art, has ditched the virtual for the physical. So if you want to see the selections from the 51st edition, which runs until May 1, you have to do it in person. And while masks are not mandatory, they are recommended by the organizers.

From the outset, New Directors has focused on younger or at least less established filmmakers, many of whom struggle with social and political issues. In a bad year, that means the event is nothing more than a grab bag of nice tries and misses. But in a good year — and this is one — the event can feel like the unruly, sometimes more adventurous younger sibling of the New York Film Festival. The strength of this year’s lineup is heralded by the strong selection on opening night, Audrey Diwan’s “Happening,” a brave, clever, compelling French drama about a college student’s painful attempt to achieve an abortion in 1963. , when the procedure was illegal. I’ll have more to say about the film when it opens on May 6.

As usual, most of the slate has been removed from other festivals, including half a dozen Sundance shiners. One is Nikyatu Jusu’s ‘Nanny’, about a young Senegalese woman who works for a white family in Manhattan with an adorable daughter and the kind of nice, exasperatingly polite, wide-smiling parents who, if they were stranger still, could have played roles in a sequel to “Get Out.” With firm directing, an expressionist palette, and a transfixing lead role by Anna Diop, “Nanny” cleverly draws on African folklore and old-fashioned Hollywood horror freak-outs to tell an emotionally captivating, second-rate tale of class, sex. and race – meaning it’s also about power.

Unlike “Nanny,” most of the selections lack US distribution. That could, of course, change, though it’s doubtful that most will get a theatrical release, given the fragile state of foreign language distribution in the United States. That makes an event like New Directors all the more necessary and also gives it an air of quiet urgency. So try to see Laurynas Bareisa’s ‘Pilgrims’, a creepy, impeccably controlled Lithuanian nail biter about a husband and wife who relive the gruesome murder of a loved one. As they uncover the crime, stubbornly uproot the past, explore dark cellars and confront unwelcome bright faces, they exorcise personal demons, and the long shadow of World War II comes upon them.

Another must-see is Sierra Pettengill’s “Riotsville, USA,” a spellbinding documentary essay that follows American anti-black racism through a wealth of disturbing, sometimes super-crazy archival footage from the 1960s. The title refers to several strange Potemkin-esque cities that the US military built in the wake of the civil unrest of the time. There, against rows of cardboard shop windows bearing generic names, soldiers—some in uniform, others in civilian clothes—performed pantomimes of violence, drills observed by local politicians who took lessons from these war games back to the home front. As the Johnson administration struggled publicly with the fires at home, including with the Kerner Commission investigating the roots of the unrest, it also fueled future fires.

There are also predictable disappointments, most notably Eskil Vogt’s “The Innocents,” who is best known for the scripts he co-wrote with Joachim Trier, including “The Worst Person in the World.” The Innocents is more similar in theme and haunted atmosphere to one of their previous collaborations, Thelma, about a woman with telekinetic powers. Set in a sinister, isolated housing complex next to one of those woods where the wind always blows ominously through the trees, “The Innocents”—the title seems to nod to the 1961 psychological horror film starring Deborah Kerr—follows the very, very bad things that multiple happen to children. The results are unnerving, impeccably crafted and downright unpleasant.

Like “Nanny,” some of the most memorable selections in New Directors use families to explore a constellation of ideas about contemporary life, its pressures, and thorny complexities. In films as diverse as ‘Father’s Day’ (from Rwanda), ‘The Cathedral’ (the United States) and ‘Shankar’s Fairies’ (India), the family is at once an intimate unit and a microcosm of larger cultural and social relationships. A significant number of titles in the program are women-driven and, not coincidentally, patriarchy also looms – overt and otherwise – as a means of domestic control, as an arm of the state, as a virulent presence or as a structuring absence. Be that as it may, Father certainly doesn’t know best.

One of the most exciting discoveries, Kivu Ruhorahoza’s “Father’s Day” combines three loosely connected stories that examine the tormented toll of historical and generational trauma. In one story, a hollow-eyed masseuse mourns the abrupt, outwardly random death of her son and the loss of her business to the pandemic while her idiot husband dreams and makes plans. Elsewhere, a daughter takes a painful assessment of her dying father and his hold on her. In the brutal third story, a petty thief teaches his young son to be cruel (and be warned, some of these scenes can be hard to watch). An unspoken wickedness, genocide haunts this film, and as men trouble the present, women look – hopefully movingly – to the future.

Ricky D’Ambrose’s slow-cooking, visually striking drama “The Cathedral” follows the coming of age of a boy – played by separate actors – who grows up in a lower-middle-class family that gradually falls apart year after year. one loss and disappointment at a time. The story begins in the 1980s and charts the bleak disintegration of the family through a series of precisely framed and staged chronological scenes where not much seems to happen or everything happens. With imperturbable acting, explosions of paternal violence, and the occasional nod to the outside world (the Gulf War, a Kodak commercial), D’Ambrose fuses the personal and the political with grievous coolness and a boldly deployed anti-aesthetic.

In vivid contrast, Irfana Majumdar’s quietly penetrating drama, “Shankar’s Fairies”, uses beauty to have sharp critical effect. Set in the lavish grounds of a sprawling estate in India, the story revolves around the daughter of a wealthy family and one of its many servants. As news of the 1962 Sino-Indian War comes in regularly, the film charts this child’s ties and radically unequal lives, with her British school and manners, and of her loyal, exploited caretaker. With little exposition, flashes of breathtaking ferocity and banal moments brimming with meaning—a servant cutting the crusts of white bread while listening to Prime Minister Nehru on the radio—Majumdar takes on both colonialism and neo-colonialism.

The tonally and visually distinct “Dos Estaciones” and “Robe of Gems” both take place in a contemporary Mexico consumed by violence. In ‘Dos Estaciones’, director Juan Pablo González links the trials and tribulations of the owner of an artisanal tequila factory with the brutality of global capitalism: her family’s legacy and her future are existentially endangered by foreign competitors. In ‘Robe of Gems’, director Natalia López Gallardo focuses on women from different classes whose lives are undone by shocks of barbarity, mostly domestic. Gallardo owes too much to some of her art cinema influences, including Carlos Reygadas. But she – like a number of other new and new directors this year – is nonetheless a talent to watch.

New Directors/New Films runs from Wednesday through May 1. Visit newdirectors.org for more information.