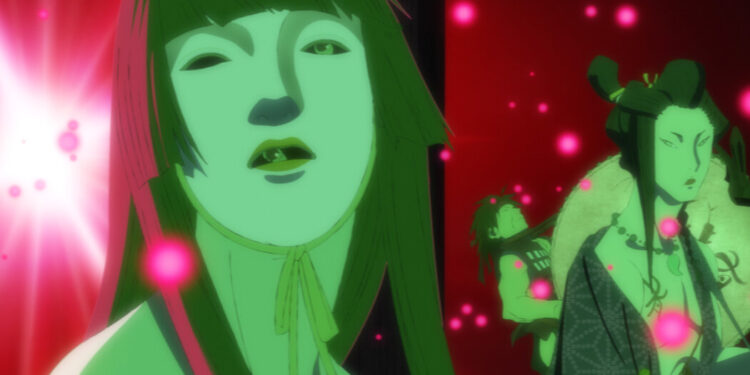 Visually opulent and narratively confused, the anime “Inu-oh” is set in 14th century Japan. At least the main story. It tells of two young, daringly talented castaways – a blind musician and a cursed dancer – who meet on a dark evening. After the usual how-do-you-do, they start performing for each other and quickly slide into enchanted synchro. Together they frolic and jamming and whirling, and before long they are soaring, spinning against an expanse of glittering stars as they orbit each other like celestial bodies.

It is fitting that these characters meet on a bridge, as the film encompasses past and present, reality and fantasy. It is based on a novel, “The Tale of the Heike: The Inu-oh Chapters”, by Japanese writer Hideo Furukawa which builds on “The Tale of the Heike”, a foundational medieval epic about clans embroiled in civil war. . A source of innumerable interpretations, the original story climaxes with the battle of Dan-no-Ura, in which the Heike clan is defeated, the child emperor drowns, and a sacred imperial sword is lost. That sword shows up regularly in “Inu-oh” – but good luck understanding why.

What the sword—which sometimes drips blood—has to do with our two whirling strangers is not entirely clear. Those who have read Furukawa’s novel, which doesn’t appear to have been translated into English, may have no problem following the film’s labyrinthine twists, time shifts, narrative elisions, and fantastical flourishes. After forgetting the first hour or so and much of the (confusing!) introductory exposition, I gave up trying to put the pieces together. Instead, I simply dug into the often spectacular animation, enjoying the watery tones, vibrant character designs, and recurring, energizing embrace of near-abstraction.

Director Masaaki Yuasa (“Ride Your Wave”) opens “Inu-oh” with a great cry of images that announce his visual ambitions and leave you little time to get your bearings. After a short, lively sprint through time, the story centers on Tomona (voiced by Mirai Moriyama), a boy who lives with his parents in a fishing village. One day, two royal emissaries order Tomona’s father to dive for a mysterious treasure. It goes disastrously wrong; the father is killed and Tomona blinded. He leaves the house, but soon finds a calling, becomes a biwa (lute) player and eventually meets the stranger on the bridge.

That would be Inu-oh (Avu-chan, from the rock band Queen Bee), and his background adds complications. A pariah born with severe deformities, including an arm longer than his fiery legs – when he runs it runs behind him just as dangerously as Isadora Duncan’s scarf – Inu-oh hides his face under a gourd mask. He also speaks with an adenoidal whine and scrambles around with feverish agility that evolves into a kind of superpower after he and Tomona meet. Together they set out and refine their talents: Inu-oh becomes a performing sensation and Tomona a proto-rocker, complete with screaming biwa and admirers.

Given the attention Yuasa gives to these passages, it’s clear he loves the idea of ​​14th-century performers rocking out like modern-day arena gods. If nothing else, these interludes have a crisp and direct storytelling that is otherwise lacking here. (The script is by Akiko Nogi.) It’s certainly funny to see Tomona jamming: he plays his biwa behind his head à la Jimi Hendrix (just to be clear, the resemblance is strictly gesturing), whips around his luxurious mane and is bare-bones chest, whipping up the crowd. But as the performances reveal truths about the players and their lives over time, they quickly become tiresome.

Still, sometimes beauty is enough (or almost). And “Inu-oh” is often visually captivating, starting with an early interlude that, with its hues, delicate figures, negative space, and lateral movements, looks like an animated scroll painting. This sequence, like the rest of the film, retains a strong trace of the human hand and demonstrates a deep understanding of (and delight in) the plasticity of the medium, all of which are too often absent from contemporary commercial animation. Even as Yuasa’s approach shifts from section to section – as he plays with texture, volume and hue and gently shifts the balance between the figurative and the abstract – his extraordinary touch remains visible in every line and in every dazzling swirl.