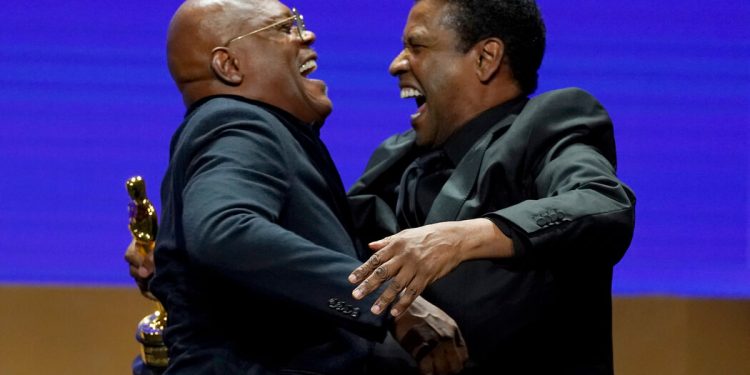 On Friday night in Hollywood, a Marvel superhero took home an honorary Oscar from one of the biggest movie stars in the world.

Too bad it wasn’t televised.

The stage was the Governors Awards, an intimate ceremony at the Loews Hollywood Hotel where Samuel L. Jackson received that Academy Award from an absolutely delighted Denzel Washington, who threw his arms around Jackson as they rocked back and forth with a laugh. The 73-year-old honoree reminisced about a career that included an Oscar-nominated “Pulp Fiction” performance and multiple appearances as super-spy Nick Fury in Marvel films.

“I went out to entertain the audience the way Hollywood entertained me: let them forget about their lives for a few hours and be excited, impressed or excited in the great room where fantasy lives,” Jackson said.

He looked at his new piece of gold hardware. “When I got this call last year, it was unexpected,” Jackson said. “But I guarantee this thing will be cherished.”

While the honorary Oscars were once a staple of the live broadcast, they were removed from the show in 2009 due to lingering concerns about its length. That prompted the academy to create the Governors Awards, a non-televised ceremony devoted solely to the honorary Oscars that also became one of the swankiest nights of the season, a celebration that pitted dozens of potential contenders. to facetime with voters.

That element of the show was drastically curtailed this year, when the Governors Awards were postponed from their original berth on Jan. 15 due to Covid fears. By the time Jackson and writer-director Elaine May, actress-director Liv Ulmann and actor Danny Glover gathered last night to receive their awards, the voting for this year’s Oscars had been closed for days, and many of the nominees opted instead for Friday night parties hosted by their agencies and studios.

But even though the ceremony was smaller, the speeches were allowed to go on for a very long time, as there was no frantic network manager demanding that they be trimmed. Glover acknowledged that after speaking for several minutes about the political activism that led him to receive the academy’s Jean Hersholt Humanitarian Award. He also made room to lavishly praise both Ulmann and his host Alfre Woodard.

“I didn’t refer to the teleprompter at all,” Glover said with an apologetic smile. “Sometimes we actors get a little lost without a script.”

Norwegian actress Ulmann told several stories about the tortuous path that led her to become a key collaborator of director Ingmar Bergman. For a long time, Ulmann said, she felt shy about her calling.

‘In Norway you have to live by a certain rule: don’t brag,’ she said, before slyly adding, ‘That’s why I brought 20 people with me tonight. They can tell Norway: ‘It’s true, she got an Oscar.’”

“Don’t look up.” Two astronomers discover a comet heading straight for Earth. As they pass the bad news, the President of the United States has other things to watch out for than the impending catastrophe.

“West Side Story.” Steven Spielberg’s remake of one of Broadway’s most celebrated musicals – a modern version of “Romeo and Juliet” – centers on the forbidden love between Tony and Maria, who are involved with two rival street gangs on the West Side of Manhattan in the 1950s.

An honoree was much more concise. Before the evening began, many wondered if there would even be a performance by May, an Oscar-nominated comedian for two of her screenplays (“Heaven Can Wait” starring Warren Beatty and “Primary Colors”), but who also known for her performance with Mike Nichols, directing and acting in films such as “A New Leaf” and “Ishtar” (she won a Tony in 2019 for her performance in the play “The Waverly Gallery”). Although the other award winners had been in court for a while, May was nowhere to be seen.

Then, just before the show started, 89-year-old May entered the Ray Dolby Ballroom on the arm of Bill Murray and accompanied by her daughter, the actress Jeannie Berlin. May was first up and Murray introduced her as “probably the most beautiful, intelligent woman I’ve ever worked with – and she’s saved my life professionally on countless occasions.”

As she took the stage, May joked, “They told me Zelensky would introduce me tonight, but thank goodness I got Bill instead.” Then, moments later, “I don’t know what else to say except enjoy your food.”

With that, she left the stage and the ceremony.