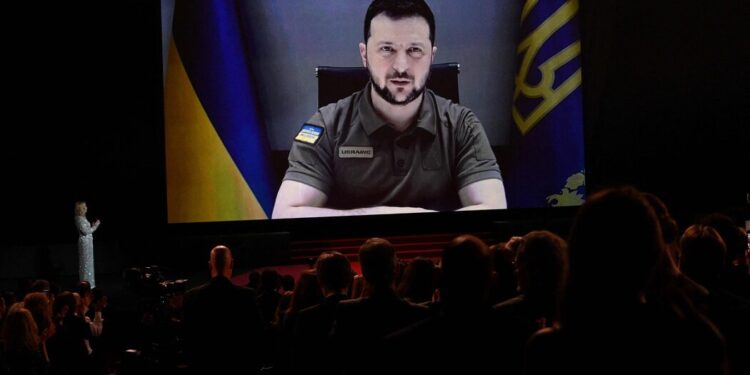 Ukraine President Volodymyr Zelensky delivered a virtual speech to the opening ceremony of the Cannes Film Festival on Tuesday, citing Charlie Chaplin’s celebrated satire of fascism against some of the world’s leading stars and filmmakers.

“People’s hatred will pass, and dictators die, and the power they have taken from the people will return to the people,” Zelensky said, quoting “The Great Dictator.”

“And as long as people die, freedom will never be lost.”

Zelensky appeared at the festival via satellite, dressed in his now signature green army shirt, to a standing ovation from the crowd that gathered on the French Riviera.

The address was his last stop on an ongoing and extensive diplomatic tour to bring global attention to his country’s plight. Since the Russian invasion began in February last year, he has been delivering addresses via a video link regularly to governments of countries as large as the United States and as small as Malta.

In April, he gave a surprising virtual speech at the Grammys, telling the audience that his country’s musicians “were wearing body armor instead of tuxedos.”

“They sing for the wounded in hospitals,” he said, “even for those who can’t hear them.”

Later that month, he appeared live at the Venice Biennale. During the opening of the exhibition “This is Ukraine”, Mr. Zelensky vividly described the horrors his people had to endure. With a digital Ukrainian flag chasing him, he said: “There are no tyrannies that wouldn’t try to limit the arts. Because they can see the power of art. Art can tell the world things that cannot be shared otherwise.”

Mr. Zelensky’s oratory efforts have been remarkably effective in providing his country with the weapons, aid and international support it needs to fight Russia. He previously worked as an actor and starred as an unlikely Ukrainian president in “Servant of the People,” a TV satire that preceded his own actual election as president in 2019.