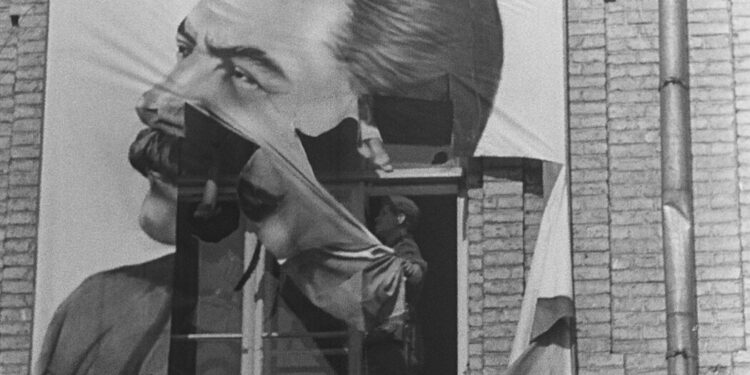 When Russia invaded Ukraine in February, my social media feeds were filled with condemnations of Russian President Vladimir Putin and lists of recommendations on how best to support Ukraine. All this made me feel a little sheepish. Suddenly, Ukrainian cinema was relevant, and a familiar, hazy feeling returned: What’s the use against the brutal reality of war? What can be achieved by engaging with Ukrainian art and film beyond the flimsy goal of awareness?

At the time, I was on my way to the True/False Film Festival in Columbia, Mo., where “Mr. Landsbergis’, the four-hour, muscular documentary epic by Ukrainian filmmaker Sergei Loznitsa about the Lithuanian independence movement, has its American premiere. Unless you were an arthouse movie buff, or perhaps someone interested in Eastern Europe, Loznitsa’s films were considered obscure. This is despite being a prolific and critically acclaimed director and arguably the preeminent chronicler of post-Soviet history.

However, in light of these latest features, my clumsy initial reactions started to matter. Watching a Loznitsa film is anything but a passive activity. Think of his documentaries: they are often composed of archival material and avoid (or very sparingly) the use of obvious editorial methods such as voice-over, interviews and title cards. Rather than providing background information, Loznitsa relies on loaded images carefully selected and organized into montages, making his films sometimes feel as if they are being thrown into the deep end of history without a life jacket.

His works are also clear examples of the intertwining of real-world politics and film production processes. In “Babi Yar: context” Loznitsa reuses footage from World War II, much of which was originally intended as Nazi and Soviet propaganda, to reveal the cycles of violence that unfolded in the Ukrainian city of Kiev after the 1941 massacre of nearly 34,000 Jews by the Nazis and their Ukrainians. allies.

Yet Loznitsa has a deeply cynical outlook, which is most evident in his narrative traits, such as ‘Donbass’, a stark satire about corruption and propaganda in the separatist regions of Donetsk and Luhansk. In the film, Loznitsa swings between farce and horror, interweaving local vignettes: a blatant demonstration of a Russian friend parading medical staff around an office to expose a doctor’s alleged theft of supplies (the materials are obviously planted). ); a Ukrainian soldier taken hostage and then practically tarred and feathered by sadistic civilians; the murders of a crew of pro-Russian propaganda actors, whose deaths are blamed on Ukrainian nationalists. But the incessant gallows of humor, cruelty and chaos ultimately feel like a surrender to total nihilism.

The reach and import of Loznitsa’s films make him a formidable spokesperson for Ukrainian cinema, but I wonder if his cool, impersonal approach – dealing with power structures and the complex ramifications of historical events – could also provide some sort of distance. promote.

What does life feel like in Ukraine and how do ordinary people carry on in the midst of perpetual violence and escalating militarization? What does it mean to live in the crosshairs of Russian imperialism and Ukrainian nationalism? A number of recent and emerging films by Ukrainian filmmakers, born of the ongoing conflict, attempt to articulate these tensions, some more directly in conversation with the atrocities of war than others.

Maksym Nakonechnyi’s “Butterfly Vision,” which premieres in Cannes in the coming days, follows a Ukrainian reconnaissance expert who struggles to adjust to normal life after being raped and held as a prisoner of war. Natalya Vorozhbit’s (questionably bleak) omnibus film ‘Bad Roads’ (streaming on Film Movement Plus) loosely connects four stories set around the Donbas and examines the fraught relationships between vulnerable women and the soldiers stationed in the region.

In Valentyn Vasyanovych’s sober drama “Reflection” (in select theaters), a Ukrainian surgeon, Serhiy, is captured by Russian soldiers and forced to help remove the bodies of Ukrainian soldiers who died while being tortured. The nightmarish first half – set in a sludge-gray, off-the-grid prison with a portable human incinerator – unfolds with unnerving levels of patience. We are practically witnessing the trauma seeping into our hero’s bones. Then, in the second half, Serhiy is released in a prisoner swap, and everything about his life, including his posh, high-rise apartment and his relationship with his fearful young daughter, takes on a zombie state, shrouded in a dissociative haze even as he trying to repair itself.

It is true that art offers us the opportunity to face inconvenient truths, and yet the most serious and gloomy examples are usually considered the most important, the most persistent, informative and worthy of our time. But the experience of life through war does not begin and end with raising weapons or exposing the worst victims. Understandably, we are more easily awakened to these extremes, but perhaps a different kind of sensibility is warranted, one that communicates not only the worst of life in war, but the breadth and idiosyncrasy of everyday resilience.

That’s why two movies in particular stand out, and they’re not interested in making monumental statements about history and violence and terror, even though this reality is undeniably lurking everywhere.

First up is Kateryna Gornostai’s tender teen novel, “Stop-Zemlia” (available on major digital platforms), is set in Kiev around 2019. It’s a meandering film, as are the three clumsy youngsters in the middle – self-described ‘raardos’ who struggle with their sexuality, long for distant crushes, smoke cigarettes, have sleepovers and text anonymous admirers. ‘and.

Like the others in their class, Masha, Senia and Yana are played by non-professional actors who left Gornostai a lot of room to improvise. At the same time, talking head style interviews accentuate the drama and forge connections between the performers – real Ukrainian teenagers – and their roles. Senia, whose family used to live in a violent part of the country, struggles with PTSD, and we see the children, short, wearing helmets and brandishing weapons as they participate in combat training. But these are just threads in a larger web of experience. While we can predict what will happen to many of these young adults in a few years’ time, given the richness of their inner lives, we cannot imagine them as sole victims.

And in Iryna Tsilyk’s metatext documentary, “The Earth Is Blue as an Orange” (in select theaters), the war takes place just outside the window of one family, but they don’t just endure, they live and create. Tsilyk follows a single mother and her children, the Trofymchuks-Gladkys, who live in an apartment in the tumultuous Donbas region. Constant shelling in the distance creates surreal background noise, though the gang is oddly blasé about their plight. There are certainly moments of sadness and anguish, but they are matched by pleasures and triumphs: the unveiling of a full purse for the eldest daughter, a joyous birthday celebration, the smaller children always running around the room.

The family members also make a movie about their lives, which means they are hyper-aware of certain cinematic tropes. “It should be tragic,” one child says as she tries to suppress laughter before giving testimony on camera. Finally, the family project is shown to a small local audience, with the camera in focus on every captivated gaze. One might wonder if and how the film resonates with these audiences – and what would they have to say for themselves?