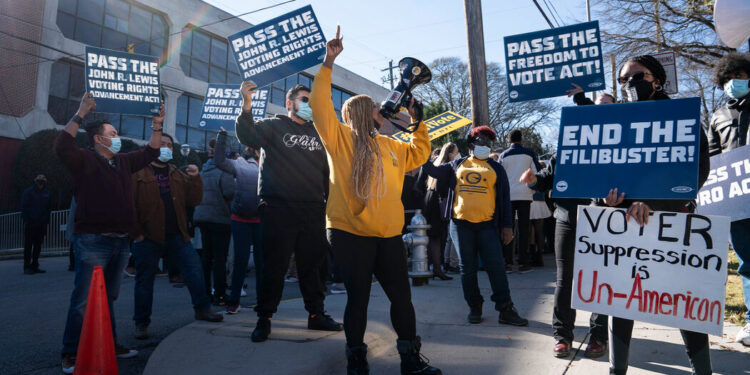 A proposed change would make it clear that the vice president only has a ceremonial and administrative role in counting the electoral votes. Another would make it much harder to object to the bill, which currently allows a single senator and a member of the House to contest a state’s electoral votes. In the bill drafted by Mr. King, Mr. Durbin and Ms. Klobuchar, voters could only be challenged if one-third of each chamber objected.

In the House, four members of the committee investigating the Jan. 6 attack—Representative Liz Cheney, a Republican from Wyoming, and Representatives Zoe Lofgren and Adam B. Schiff of California and Jamie Raskin of Maryland, all Democrats—are also working on a rewrite of the Electoral Act. They also discussed whether their bill should be expanded to include measures that block anti-democratic electoral practices at the state level, such as allowing partisan lawmakers to select presidential voters rather than the electorate.

Ms. Collins’s group discussed several measures, such as expanding the permitted use of federal election grants, now primarily for purchasing voting machines that are not connected to the Internet, including recruiting and training election personnel, purchasing voting machines creating paper ballots and expanding cybersecurity efforts. She said the group also agreed that tough new penalties should be introduced to thwart the kind of intimidation and intimidation of election officials that Trump supporters had dished out, a provision of the Freedom to Vote Act.

They are still debating how far to go in blocking the removal of unbiased election officials for no reason by partisan state officials or lawmakers. The Democrats’ Voting Rights Act makes such actions a federal crime unless a crime can be proven by the election officer.

For Democrats, that provision is a necessity. And they say that if Ms. Collins’ measure is to have any appeal, Republicans would have to accept some provisions of the voting rights law to counter voter suppression, such as a minimum number of early voting days or a compromise provision drafted by Mr. Manchin that would pass voter identification laws, but ensures that a range of identifiers would be acceptable.

“It is very important to ensure that votes are counted, with provisions in both the Freedom to Vote Act and the Electoral Count Act, but that is still no substitute for protecting people’s voting rights from the start,” said Ms Klobuchar, who chairs the Rules Committee, which would consider such legislation.

Ms. Collins said her faction — which includes two additional Republicans and two additional Democrats who have not publicly disclosed their involvement — will meet again the week after the voting rights bill is blocked.