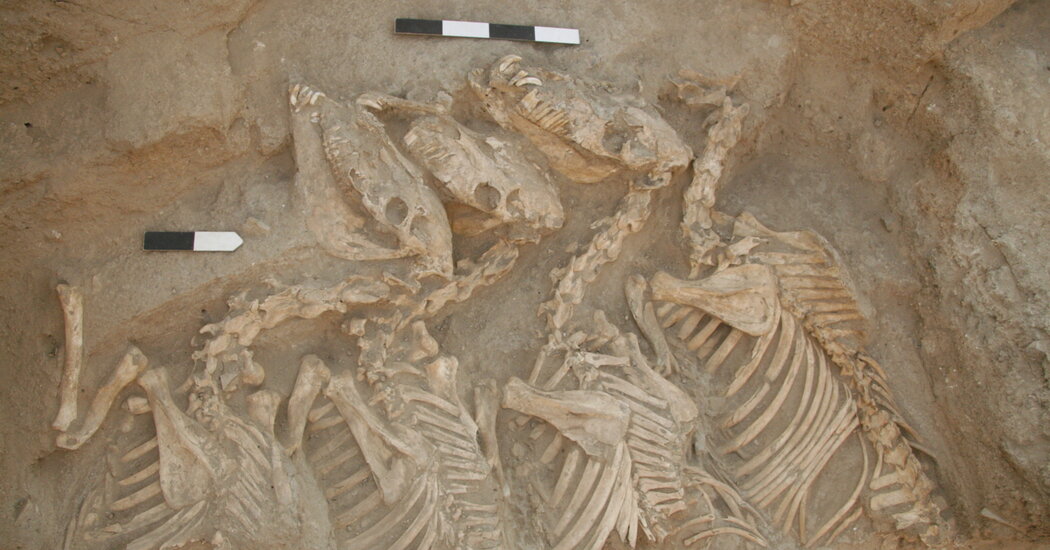 In ancient Mesopotamia 4,500 years ago, long before horses arrived in the region, another lively member of the horse family, the kunga, played a major role in pulling four-wheeled chariots into battle.

Archaeologists had suspected that these animals—depicted in art, their sales recorded in cuneiform writing, their bodies sometimes laid to rest in rich burial grounds—were the result of some kind of crossbreeding. But evidence was lacking.

On Friday, a team of researchers reported on more than a decade of research in the journal Science Advances, concluding that studies of ancient DNA showed the kunga was a cross between a female donkey (Equus Africanus asinus) and a male Syrian wild ass (Equus hemionus hemippus).

The kunga is the first known example of a human-designed hybrid of two species, a production that goes well beyond the traditional processes of domesticating animals, the researchers found.

Eva-Maria Geigl, a specialist in ancient genomes at the University of Paris, and one of the scientists who conducted the research, said cultivating kungas was really “early bioengineering” that evolved into a sort of old biotech industry. .

Like mules, which are hybrids between horses and donkeys, created much later, the kungas were sterile. Each new kunga was a one-off, a mating between a wild donkey stallion and a donkey.

The stallions had to be captured and kept in captivity, even though they were very aggressive, as modern records indicate. dr. Geigl said the director of a zoo in Austria, where the last Syrian wild donkeys died in captivity, described them as “furious”. Archaeological records show that a breeding center in Nagar (now Tell Brak, Syria) shipped the young kungas to other cities. They were precious animals, status symbols and used in war and military ceremonies.

Kungas maintained their high status for at least 500 years, said Dr. geigl. Horses did not appear until about 4,000 years ago to take their place in battles and ceremonies, and to contribute to the creation of other hybrids. Before the current study, the oldest known hybrid was a mule from a site in Turkey that dates back to 3,000 years ago. Members of the same team reported on that find in 2020.

The research team dealt with the very poor preservation of fossils from desert areas, but used different techniques to examine ancient DNA. Laurent Frantz, a paleo-genomics expert at the Ludwig Maximilian University of Munich who was not involved in the study, said that despite these difficulties, the “results were very convincing”, showing that people “long before the advent of the horse .”

Fiona Marshall, an archaeologist at Washington University in St. Louis who has researched the prehistory of donkeys and their domestication, said the study was “hugely important,” in part because it showed the breeders had clear intentions. The early process of domestication was always obscure — probably part accident, part human intervention — but this research showed what the ancient Syrians were looking for.

“People wanted the qualities of a wild animal,” she said. Donkeys may have been tamer than their ancestors, the African wild ass, but the breeders in Mesopotamia wanted to go back to other wild donkeys for strength and speed—and perhaps size as well. Although the last known living specimens of the Syrian wild ass were very small, a little over three feet at the withers, older animals of the same species were larger.

dr. Geigl — who collaborated on the study with Thierry Grange at the University of Paris, E. Andrew Bennett, now with the Institute of Vertebrate Paleontology and Paleoanthropology in Beijing, Jill Weber of the University of Pennsylvania Museum of Archeology and Anthropology, and others — said that the team sequenced DNA from a variety of sources, including modern donkeys, horses and several species of wild donkeys, and museum samples.

Of particular note were the bones of 44 kungas buried in a rich cemetery in Syria called Umm el-Marra. Those skeletons previously had Dr. Weber et al. to suppose that it was hybrids and that it was the kungas described in tablets and represented in art.

Their teeth showed bite marks and indicated that they had been fed a special diet. The new research used DNA from those kungas to compare with other species and determine that these animals, as suspected, resulted from breeding female donkeys and male Syrian wild asses.

The research team also sequenced DNA from a Syrian wild ass found at Gobekli Tepe in Turkey, an 11,000-year-old site where humans collected for purposes still being studied, and from two of the last animals of the species, kept at a zoo in Vienna. .

It is a species that no longer exists. The kunga cannot be recreated, said Dr. Bennett. Donkeys abound, of course, but the last known Syrian wild asses died out in the late 1920s. One was shot in the wild and the other died in a zoo in Vienna.

“The recipe for making the kunga was unknown for thousands of years,” said Dr. Bennett. “And we’re finally decoding it, less than 100 years ago that one element went extinct.”