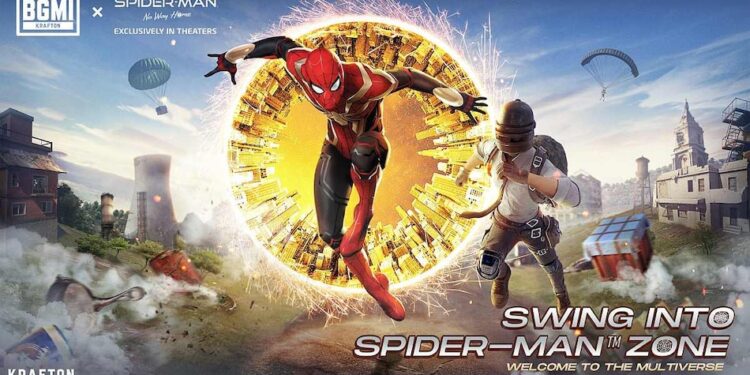 Battlegrounds Mobile India (BGMI) developer Krafton is rolling out a new update for the popular Battle Royale game. As previously announced, the main highlight of the update is the Spider-Man: No Way Home theme. The latest 1.8.0 update brings UI improvements, allowing players to quickly choose a desired match. With the update, players will be able to enjoy the new Livik: Aftermath theme until February 14. Once the new version is installed, the ranking and normal matches will be displayed separately. The update also adds automatic marking. In addition to new features, the update also comes bundled with some improvements to the existing elements in the game. Some players reported issues with the January update and the company has offered a fix.

Krafton announced the rollout of version 1.8.0 update for Battlegrounds Mobile India on Friday. The update for both Android and iOS brings Spider-Man: No Way Home Theme mode and Aftermath game mode to players. It now has a Separate Matching mode. This will reflect Season Rank Points in Ranked Matchmaking, and Season Rank Points will not be affected if the player is playing in Normal Matchmaking. Krafton has made some changes to the user interface to help users easily pick a desired match.

Another highlight in the new update, Livik: Aftermath mode can only be played in normal matching. That won’t hurt the season band point. In the Livik: Aftermath: Firearm and Scope mode, players can defeat enemies with automatic fire. With the new version, players get ziplines for fast movement around the map. In addition, there will be a communication tower to rescue the fallen teammates.

BGMI players can see new supply stores on the map in classic mode, where they can exchange looted coins for supply items. The 1.8.0 version has an indicator that shows the location of the upcoming supply crate. Revive objects to recall defeated teammates displayed on the map. The players must remove ID cards from the defeated teammates’ boxes to revive them.

The new 1.8.0 update brings improvements in firearms. The update also has some fixes. The firing direction and target issue varied by screen resolution, and the bullet distribution issues have been resolved. BGMI now lets eliminated players swim in the water. Furthermore, in the new version, the city name is displayed on the map in three dimensions.

Auto-mark to find enemies and auto-jump with ping are the other new features bought by the update. Furthermore, the company has added improvements to the reception and the result of reporting cheaters. It offers rewards for high earning players.

After installing the January update, some users are having issues with the game. Krafton has raised two issues and offered a solution for them. Users are advised to contact customer service in the game in case of inconsistencies by tapping the arrow in the lower right corner of the lobby > Settings > Basic > Customer Service.