Chants, chaos and control: why unrest in Kazakhstan should worry the world 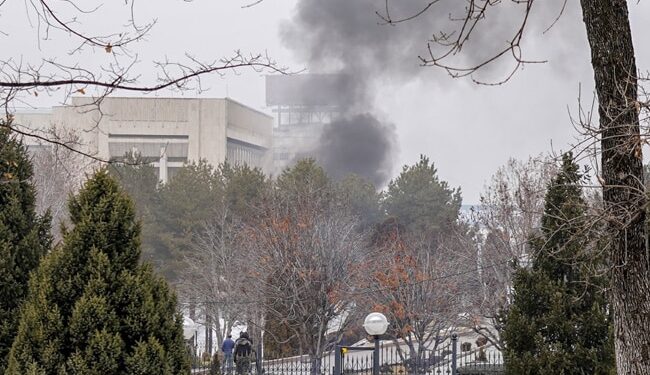 On January 4, thousands of protesters furious at the price hike started a protest in Almaty (File)

As Russian-led troops sent to help quell the bloody unrest in Kazakhstan begin to retreat, AFP looks to protests that have left dozens dead and plunged the repressive Central Asian country into chaos.

Protests broke out in the oil-rich western region of Mangystau in the town of Zhanaozen over the New Year over a rise in prices for liquefied petroleum gas (LPG), which is used for cars.

The unrest is spreading to the regional center of Aktau on the Caspian Sea coast of the former Soviet country.

On January 4, thousands of protesters infuriated by the price hike take to the streets of Almaty, the largest city, as police fire tear gas and stun grenades.

Later that evening, President Kassym-Jomart Tokayev explained the state of emergency in the city and in the troubled west after saying he would cut the price of LPG.

Many sing “Old Man Out!”, a reference to Tokayev’s still powerful predecessor and mentor Nursultan Nazarbayev.

A statue of the ex-president is later seen on social media.

Tokayev sacked his cabinet early on January 5 in a bid to deal with the unprecedented unrest, but protesters are gathering again, blocking roads and storming the local government headquarters in Almaty.

The mayor’s office and presidential residence in the city later go up in flames.

Internet and mobile phone networks are cut and the state of emergency is extended nationwide.

Tokaev accuses the protesters of “massive attacks on law enforcement officers”, which have left several dead and many injured, and claims the country is under attack by “terrorist” groups.

“I intend to act as hard as possible,” he says.

The White House and the United Nations are calling on Kazakh authorities to show “restraint”.

Late on January 5, the embattled president calls for help to crush protests by the Moscow-led Collective Security Treaty Organization (CSO).

Videos on social media show looted shops in Almaty and automatic gunfire in the street. The airport is also looted.

Police say they killed ‘dozens’ of protesters overnight as they tried to take over government buildings and police stations. About 2,000 are arrested.

Eighteen security guards were killed and 748 injured in the unrest, local media reported. The health ministry says 1,000 people have been injured.

In another effort to appease protesters, the government is setting fuel price limits for six months.

But late in the afternoon, gunshots echo through the streets of Almaty. Security forces then clear the city’s main square.

The United Nations and the United States urge all parties to refrain from violence. The European Union says sending Russian troops “revokes memories of situations to avoid” — a reference to the Prague Spring of 1968 and the brutal Soviet suppression of the Hungarian Revolution of 1956.

Tokayev rejects talks with protesters on Jan. 7, saying he ordered “shooting without warning to kill”.

He claims that Almaty was attacked by “20,000 bandits” with a “clear plan of attack…and high combat readiness”.

On January 11, UN human rights experts criticized Kazakh security forces’ “uninhibited use of force” and the description of protesters as “bandits and terrorists”.

Such terms “should not be used to silence those who … protest against social and economic conditions,” they add.

That same day, Tokayev raises eyebrows by criticizing his predecessor, saying that “a layer of rich people” has been created under Nazarbayev’s rule and that “the time has come to pay tribute to the people of Kazakhstan and on a systematic and regular basis”.

On January 12, he visits battle-feared Almaty and pledges to “rebuild the city” on the eve of the phased withdrawal of 2,000 Russian-led CSO troops.