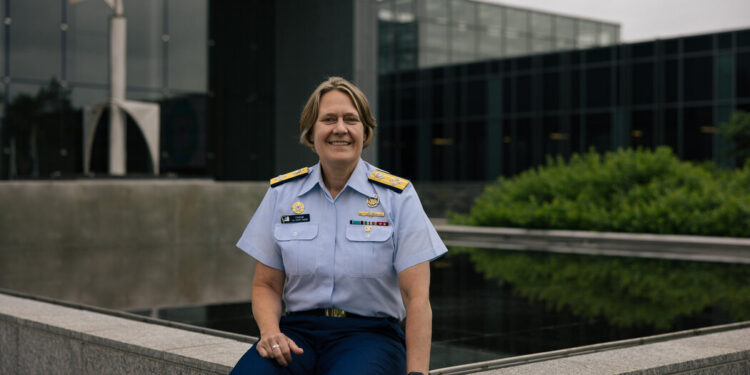 admin. Linda L. Fagan will shatter one of the last glass ceilings in the military on Wednesday when she takes her oath as Coast Guard commander and becomes the first female officer to lead a branch of the United States Armed Forces.

Admiral Fagan, previously the service’s second-in-command, graduated from the Coast Guard Academy in 1985, in only the sixth grade with women. She steadily rose through the ranks, serving at sea on an icebreaker and ashore as a naval security officer.

It wasn’t until much later in her career that she thought it would be possible to become a commander.

“A lot of people said, ‘Oh yes, I knew she was going to be an admiral,’ but I didn’t think about it,” Admiral Fagan recalled. “Even when I was first selected as admiral, you don’t think about it, and then all of a sudden you look around and you think, ‘Oh yeah, okay, I think this is possible.’ †

“When I look up in the organization, at least a few years ago there wasn’t much diversity,” Admiral Fagan said in an interview. “Even we still don’t have the diversity we need in the senior leadership ranks. But looking back, it’s all there and it’s coming – especially for women, and we still need to increase our numbers of underrepresented minority men.”

She becomes the 27th commander of the service, dating back to the establishment of the Revenue Cutter Service shortly after the Revolutionary War, and merging with the US Life-Saving Service to become the Coast Guard in 1915.

At Coast Guard headquarters in Washington, Admiral Fagan noted the historic significance of her achievement last week as she walked through a hall lined with portraits of her predecessors. She stopped in front of a painting by Adm. Owen W. Siler, the 15th commander of the service, in the 1970s.

“He was the commander when the service academies were first integrated,” Admiral Fagan said.

Years later, Admiral Siler’s wife approached her at an event and said, “I just want to tell you how proud Si and I are of the women,” Admiral Fagan recalled.

When she entered the academy, the Coast Guard no longer had a policy that prevented women from serving in any particular role or capacity, unlike other branches of the military at the time. But the fleet had to be equipped with sleeping and sanitary facilities for women. Larger ships such as icebreakers had numerous staterooms and bathrooms intended for officers, areas of which could be immediately assigned to female officers. Building permanent facilities for enlisted women on those ships, as well as on smaller cutters, would take time.

As the years passed, female officers of Admiral Fagan’s generation began to take command of small cutters at sea and work their way up.

Once women had equal opportunity at sea, the main obstacle to reaching the commander’s office was the number of years it took to gain sufficient experience for the job. When Admiral Fagan takes her place among the Joint Chiefs, she will have served about the same amount of time as everyone else around her.

Until recently, the top positions of the Pentagon were dominated by white men. Admiral Michelle Howard, now retired, became the first woman to reach the four-star rank in the Navy in 2014. Gene. Charles Q. Brown Jr., who leads the Air Force, is the first black officer to become chief of service, and Lloyd J. Austin III, the secretary of defense, is the first black man in that role. Lieutenant General Michael E. Langley, recently nominated to lead the US Africa Command, will become the first black four-star Marine Corps officer if confirmed by the Senate.

“We, as a service, must be a reflection of the society we serve, and creating opportunities for everyone in the service is important,” she added.

According to the Coast Guard, about 40 percent of the incoming class at the academy in New London, Conn., will be women, while across the entire force, only 15 percent of the staff are women.

Admiral Fagan can count on one hand the number of women who have become active-duty admirals in the Coast Guard, and she knows them by name. Among them is Vice Admiral Vivien S. Crea, who was commissioned the first Officer Candidate School class with women, rose to a three-star rank, and, like Admiral Fagan, served as Vice Commander of the Coast Guard from 2006 to 2009 .

One of the last major gender barriers in the armed forces was removed in 2015, when the Obama administration dropped policies that prevented women from serving in combat positions.

“Diverse work teams just outperform non-diverse work teams,” said Admiral Fagan. “We need to ensure that there are no barriers to service for those who are service-oriented and meet the demands of service.”

Admiral Fagan said that by the time one of her daughters entered the service, women had been represented in most of the senior positions. Her daughter is now a lieutenant.

As commander, Admiral Fagan said she would work on an overhaul of the service’s “up or out” system, in which people are generally promoted or eventually forced to leave — a practice she said was common in all branches of the military. the armed forces. One of her goals is to find ways to enable coastguards to take time off the service midway through their careers, such as when they decide to start a family.

Her first tour as an ensign took her to Seattle for an assignment aboard an icebreaker, the Polar Star. She was the only woman to serve on the ship during her two-year voyage, during which she qualified for one of the service’s most dangerous jobs: cutting channels through packed sea ice at both the North and South Poles.

Her first commanding officer of her tour on the Polar Star, Wade Moncrief, plans to be in the audience at her ceremony Wednesday.

“I’m pretty excited about it,” Mr Moncrief, 81, said in an interview, noting that Admiral Fagan had served proficiently in some of the most challenging circumstances a sailor could face.

“I think everything went pretty well,” he said of integrating his ship in 1985 with her arrival. “I think the crew understood what it was all about, that she was an officer like everyone else and had the same authority, and they acted that way.”

Mr. Moncrief, who was enlisted in 1962 and retired as captain in 1988, kept in touch with his former shipmate and attended an earlier ceremony when Admiral Fagan took command of the Pacific Coast Guard.

“You know women wouldn’t get these jobs if they weren’t performing well and not suited for it,” he said. “So yeah, they’re breaking the ceiling, but they’ve earned it.”