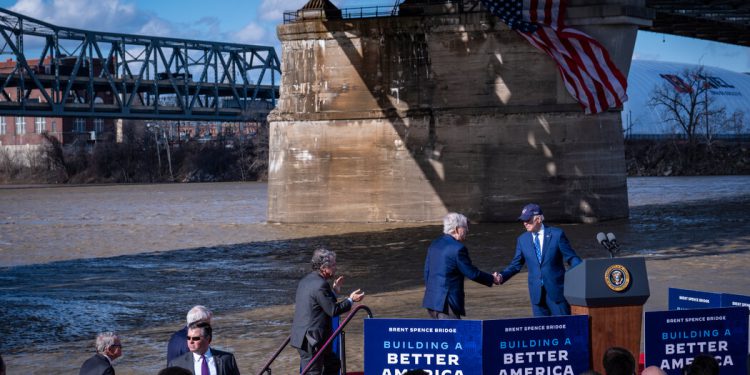 But the recent sniping between veteran politicians obscures what was at times a more complicated relationship. Mr McConnell was the only Republican senator to attend the funeral of Mr Biden’s son, Beau, who died of brain cancer in 2015. The senator later decided to rename a cancer-fighting bill in Beau’s honor.

The two men have also compromised several times over the years, sometimes to the dismay of members of their own party.

In 2011, when Mr. Biden was vice president, President Barack Obama turned to him to help broker a deal with Republicans on the budget and debt ceiling to avert economic catastrophe. It was Mr. McConnell who worked with Mr. Biden to sidestep disaster. At the end of 2012, they again worked on a budget compromise.

Even if Mr. Biden and Mr. McConnell can strike a similar deal again, it is unlikely that a Republican-controlled House, led by Mr. McCarthy or anyone else, will do the same.

But for now, White House officials are betting that the bridge event and other similar trips planned for the coming weeks will send the message that a Biden White House sees room for compromise. On Wednesday, other government officials traveled to Chicago; New London, Connecticut; and San Francisco to highlight other bridges that will be repaired with money from the bipartisan legislation.

The Brent Spence Bridge, a double-decker bridge built nearly 60 years ago, has been a bottleneck in the region’s economy for years, frustrating commuters, hindering the delivery of goods and services and threatening to become the site of the latest deadly infrastructure disaster.

The legislation will provide about $1.6 billion to renovate the bridge and build a second crossing over the Ohio River. Political leaders in the area have tried for years to secure federal funding, but to no avail. At a 2020 campaign rally, President Donald J. Trump promised to get money for the bridge, though his promises for America’s “infrastructure week” never materialized.