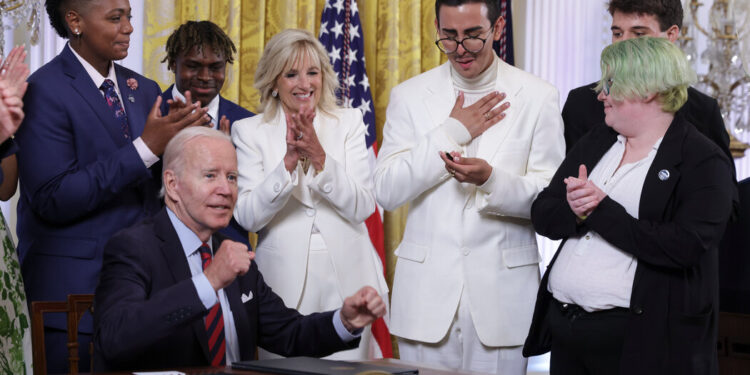 WASHINGTON — President Biden signed an executive order on Wednesday aimed at protecting LGBTQ people from a cascade of legislation in conservative states that increasingly targets the rights of gays, lesbians, transgender youth and others.

The order is intended to counter the efforts of Republican politicians such as Florida Governor Ron DeSantis, who has enacted a measure — dubbed by some the “Don’t Say Gay” law — that prohibits teachers from instructing about gender identity or sexuality. orientation.

Other laws passed in conservative states include bans on transgender girls participating in high school sports and efforts to ban the provision of gender-affirming care. White House officials have called the new laws “un-American” and said they are designed to discriminate against families and children based on their sexual orientation or gender identity.

Mr. Biden’s injunction directly targets so-called conversion therapy, a discredited therapy in which doctors falsely claim to be able to modify a person’s gender identity or sexual orientation with treatment.

At an East Room ceremony packed with LGBTQ supporters, Biden said he was moved to take action to prevent what he called “hateful attacks” by Republican governors and lawmakers across the country.

In the executive order, the president directs the Secretary of Health and Human Services and the Secretary of State to take the lead in an effort to limit exposure to the procedure on the part of American youth, and seek to promote it internationally. to terminate completely. The injunction would also instruct the Federal Trade Commission to determine whether conversion therapy amounts to a deceptive act that should earn the agency’s warnings to consumers.

For Mr. Biden, the executive order is another step toward fulfilling promises he made to the LGBTQ community during his 2020 presidential campaign.

At the time, he vowed to make his administration “look like America” ​​by appointing members of the LGBTQ community to his staff and cabinet. He made good on that promise by choosing Pete Buttigieg, an openly gay man, as his transportation secretary and designating Karine Jean-Pierre as the first openly gay black woman to serve as his press secretary.

But Mr. Biden also pledged to take specific actions as president to promote equality. On his first day in office, he signed an executive order directing federal agencies to outlaw discrimination based on sexual orientation and gender identity when it comes to health care, education, housing, employment and more.

The president’s announcement of a new executive order comes as the White House celebrates Pride Month. In his comments on Wednesday, Mr. Biden echoed what he said at a similar event a year ago: “Pride is back at the White House.”

But White House officials said the decision to issue the executive order was also prompted by the increasing number of anti-LGBTQ laws passed by Republican state legislators and signed by Republican governors.

Biden called it the “ultra-MAGA agenda that attacks families and our freedoms,” referring to the Make America Great Again slogan popularized by former President Donald J. Trump during his first term in office in 2016.

In his comments, Biden deplored the proliferation of efforts to limit or take away the rights of LGBTQ people. He said there is still a need to fight back against anti-LGBTQ sentiment, despite the Supreme Court’s decision to legalize same-sex marriage in 2015.

“No one knows better than the people in this room. We have much more work to do. A lot still needs to be done,” he says. He noted that “300 discriminatory bills have been introduced in states across this country — in Texas, knocking on the front door to harass parents, investigating parents raising transgender children. In Florida, for God’s sake go after Mickey Mouse.’

The crowd laughed at the president’s Disney reference. But Mr Biden closed his comments with a serious warning about the country’s ideological divide and the political struggle he says will continue in the coming years.

He slammed his fist on the lectern: “We will win.”