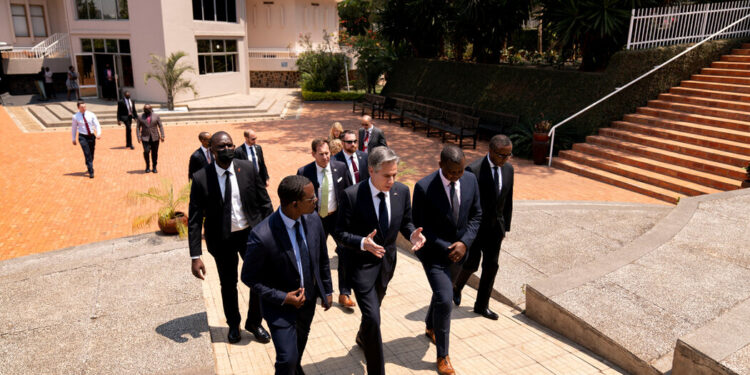 KIGALI, Rwanda – Secretary of State Antony J. Blinken said on Thursday that he had urged leaders of Rwanda and the Democratic Republic of Congo to end their support for militias in eastern Congo, and warned that continuing support for the groups would increase stability in the entire Great Lakes region of Africa.

“Whoever it is, whoever it is, that support must stop,” Mr Blinken said at a press conference in Rwanda’s capital Kigali. “It is a matter of principle that applies equally. It’s not a matter of weighing one group against another.”

US and Rwandan officials estimate that more than 130 armed groups operate in eastern Congo, which has become a battleground for militias that maimed and killed while taking advantage of the billions of dollars in minerals smuggled out of the resource-rich region. Many of the groups receive weapons and financial support from the Congolese government or other African countries.

Hundreds of people have died in the area since late last year and more than 160,000 have been displaced.

Mr Blinken said that both Congo and Rwanda should adhere to the fundamental principle that governments should refrain from arming non-governmental groups. “To the extent that that happens, it is likely to perpetuate, not end, conflict and violence,” said Mr. shine.

In the case of Rwanda, Mr Blinken said, there were “credible reports” that the government supported the March 23 movement, known as M23, and had deployed official armed forces in eastern Congo.

Mr Blinken said he expressed his concerns Thursday during a meeting with Rwanda’s President Paul Kagame, a former military officer widely credited with rebuilding the country after a 1994 genocide. Mr Blinken said he had the same message transferred during a meeting with Congolese President Félix Tshisekedi in the country’s capital, Kinshasa, on Tuesday.

Mr Blinken added that he has urged all parties to work towards a conflict mediation process in eastern Congo led by Kenya and Angola.

Rwanda’s leaders say their actions are aimed at weakening the Democratic Forces for the Liberation of Rwanda, or FDLR, a militia largely made up of ethnic Hutu fighters from Rwanda and elsewhere, including those who committed genocide in Rwanda in 1994. on ethnic Tutsis.

“Rwanda is not the cause of long-term instability in eastern DRC,” Vincent Biruta, Rwanda’s foreign minister, said at the press conference with Mr Blinken, referring to Congo. Mr Biruta added that the FDLR was committing “terrorist” violence on Rwandan territory, and that his government intended “to protect our people”.

All sides must “address the root causes of the problem” in eastern Congo, Biruta said.

In the afternoon, after the press conference, Mr. Shine a memorial on a hill in memory of the up to a million Rwandans who died during the genocide. The remains of about 250,000 Rwandans are buried under concrete slabs at the Kigali site. Mr. Blinken stood in commemoration by a wreath of yellow flowers beside the graves outside, then walked through dimly lit rooms where photographs of the victims and their belongings, including clothing, were displayed.

The day’s stop in Rwanda was the last leg of a three-country trip through Africa by Mr Blinken, who also visited South Africa and Congo this week. The Africa trip followed stops in Cambodia and the Philippines. In Kinshasa, Mr Blinken spoke to leaders there about Eastern Congo, mining practices, trade, environmental conservation and climate change. He also heard requests from Mr. Tshisekedi and other officials to pressure him Mr. Kagame to end support for the M23 militia.

Hostility towards Rwandan leaders is rife among Congolese citizens, and political cartoons and social media commentary in the country ahead of Mr Blinken’s visit portrayed the United States as supporting a belligerent government in Kigali.

At press conferences in Kinshasa and Kigali, Mr Blinken presented foreign aid to militias in eastern Congo as a possible violation of territorial integrity and sovereignty, which the Biden administration has highlighted as important international principles since Russia’s invasion of Ukraine in February .

“Let me just add that all countries must respect the territorial integrity of their neighbors,” said Mr Blinken in Kinshasa. “This is a proposal that we take very seriously around the world.”

“Any entry of foreign troops into the DRC must be transparent, authorized by the DRC, disconnected from the UN mission and notified in advance to the Security Council, in accordance with the UN resolution,” he added, referring to the long-running and troubled UN peacekeeping mission in eastern Congo.

On July 31, UN peacekeepers in Congo opened fire at a border crossing with Uganda, killing two people and injuring at least 15 others. The deaths were part of a series of violent episodes involving peacekeepers that shook Eastern Congo this summer. Just days earlier, at least 19 people, including three UN peacekeepers, were killed and 60 others injured during protests against the peacekeeping mission in the cities of Butembo and Goma.

The peacekeeping mission has been in Congo since 2010. There are nearly 13,000 people in the country, with troops and military personnel from at least 10 countries.

At the press conference in Kigali, Mr. Also shine that he had raised human rights issues with Mr. Kagame, including the case of Paul Rusesabagina, a political figure and US citizen who was convicted last September by a Rwandan court on charges of terrorism. .

In 1994, as manager of a luxury hotel in Kigali, Mr. Rusesabagina gave shelter to 1,268 people during the genocide, actions that inspired an Oscar-nominated film, ‘Hotel Rwanda’.

Prosecutors accused him of involvement with a militia, the National Liberation Front, which is the armed wing of a political group with which Mr Rusesabagina, 68, is associated.

Mr Rusesabagina disappeared during a visit to Dubai last year and then turned up as a prisoner in Rwanda.

Mr Biruta, the foreign minister, gave no indication that Rwanda would release Mr Rusesabagina, who is serving a 25-year prison sentence. “When we are dealing with people committing crimes against our country, our people, we abide by the laws, both nationally and internationally,” he said.

Anaïse Kanimba, a daughter of Rusesabagina, said her father was ill and needed to be freed, and that the United States’ relationship with Rwanda is “strong enough to push for our father’s release on humanitarian grounds”.

In May, the US State Department determined that Mr. Rusesabagina had been “unjustly detained.” Last September, after his sentencing, the department said that “the reported lack of guarantees of a fair trial casts doubt on the fairness of the verdict.”