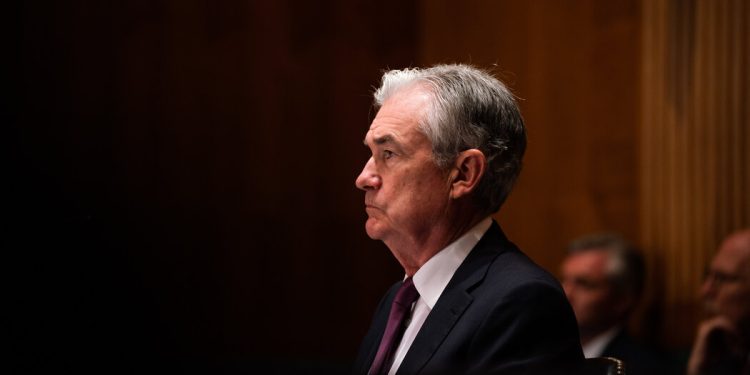 Jerome H. Powell, the chairman of the Federal Reserve, indicated on Thursday that the central bank was willing to raise interest rates quickly from May as it tries to cool the economy and prevent rapid inflation from becoming a permanent feature.

“We are really determined to use our tools to get inflation back to 2 percent,” said Mr Powell, speaking at an International Monetary Fund debate on the global economy, alongside the head of the European Central Bank, Christine Lagarde and other policy makers.

The Fed is raising borrowing costs to cool consumer demand and slow the economy when it threatens to overheat. Given the rapid inflation and low interest rates at the moment, “I think it’s appropriate to move a little faster through that process,” Mr Powell said.

A more than usual half a percentage point rate hike “will be on the table before the May meeting,” he added.

The Fed chairman’s comments come at a challenging time for the United States and the global economy. Growth has recovered strongly since the start of the pandemic, but that progress has been accompanied by stubbornly rapid inflation in the Americas and other advanced economies.

While prices are rising at a pace not seen in decades, the Russian war in Ukraine is exacerbating the situation by further disrupting supply chains and driving up gas prices. At the same time, the conflict is expected to fuel recessions in several Eastern European economies this year and hurt the global economic outlook.

While US policymakers have monitored risks to growth, from a domestic economic perspective they are even more concerned about the impact of the war on inflation. The US consumer price index for March showed prices rose 8.5 percent, the fastest pace since 1981, when oil prices rose during the conflict, rents continued to rise and a range of goods and services became more expensive.

The magnitude and continued high inflation in the US has upset Mr Powell and his colleagues. While they had initially hoped that rapid price increases would ease as the economy returns to normal, the Fed began raising interest rates in March to prevent high inflation from becoming more permanent.

Even since that meeting last month, officials and markets have come to anticipate a much faster pace of the Fed’s measures to slow the economy. Fed officials predicted in March that they would raise interest rates by seven quarters of a point by 2022; even officials who have long pushed for low rates are now suggesting that nine would likely be appropriate.

Market prices suggest that by the end of the year, rates will approach 3 percent, a level they haven’t reached since before the 2008 financial crisis.

Fed officials expect to tie their rate hikes to a plan to shrink their balance sheets, which had been blown up by pandemic bond purchases designed to calm the economy. Reducing those positions will drive up interest rates in the longer term and slow the economy further. A plan for the balance sheet could come in May and launch in June, officials have signaled.

The US Federal Reserve’s withdrawal of policy support comes as rapid wage increases, soaring housing costs and mounting price pressures in the services sector, combined with global supply disruptions, paint an uncertain picture of the inflation outlook. Officials have become more convinced that price increases will not fade unless they actively slow the economy to get them under control.

That has prompted a growing number of policymakers to demand policy rates that are not only ready to respond when needed, but high enough to actually weigh on economic activity.

“More fine-tuning is needed to steer monetary policy on a neutral, somewhat restrictive stance,” Charles Evans, president of the Federal Reserve Bank of Chicago, said at an event this week. “We’ll probably end up with something more restrictive.”

An important question is whether the Fed will be able to cool the economy and keep inflation in check without sending the U.S. economy into a recession, a recession that drives up unemployment and wipes out some of the gains that have been made. after the pandemic lockdowns.

Fed officials, including Mr. Powell, have acknowledged that striking that balance — while possible — can be challenging.

“That’s our goal,” said Mr. Powell on a soft landing, noting that no one at the Fed would argue it would be easy to achieve.

“I don’t think you’ll hear anyone at the Fed say that’s going to be easy or simple,” said Mr. powell. “It will be quite a challenge. We will do our very best to achieve that.”