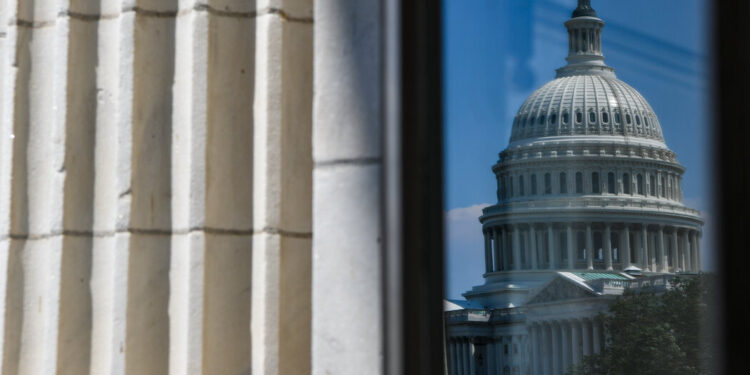 Lawmakers will return one day from their planned summer recess to vote on the legislation, which faces unanimous Republican opposition. Biden is expected to sign the measure shortly after. The Senate approved it on Sunday.

The legislation would pump more than $370 billion into climate and energy programs that should help the United States reduce greenhouse gas emissions by an estimated 40 percent below 2005 levels by the end of the decade. It would also renew three-year grants under the Affordable Care Act and fulfill a long-held Democratic goal to lower the cost of prescription drugs by allowing Medicare to negotiate prices directly and reduce the annual out-of-pocket cost to recipients for $ 2,000.

The package would be funded largely by tax increases, including a new corporate share buyback tax and a minimum corporate tax of 15 percent for high net worth companies. Initial analyzes of the legislation showed it could reduce the country’s deficit by as much as $300 billion over a decade.

“This life-changing legislation is leveraging the public interest over special interest,” California Speaker Nancy Pelosi wrote in a letter to her colleagues this week. “This bill,” she added, “makes a huge difference at the kitchen table of American families.”

Car industry. Currently, taxpayers can get up to $7,500 in tax credits on the purchase of an electric vehicle, but there is a limit to the number of eligible cars from each manufacturer. The new bill would remove this limit and extend the tax credit until 2032; used cars would also qualify for a credit of up to $4,000.

Energy industry. The bill would bring billions of dollars in rebates to Americans who buy energy-efficient and electrical appliances. Businesses would receive tax credits for building new sources of zero-emission electricity. $60 billion is set aside to encourage clean energy production and fines for methane emissions that exceed federal limits from 2024.

Healthcare. For the first time, Medicare would be allowed to negotiate with drug manufacturers about the price of some prescription drugs. The bill would also extend the grants available under the Affordable Care Act, which was due to expire at the end of the year, for another three years.

Tax code. The bill would introduce a new minimum corporate tax rate of 15 percent on profits that companies report to shareholders, applicable to companies that report more than $1 billion in annual income but can use credits, deductions and other tax treatments to lower their effective tax rates. . The legislation would bolster the IRS with an investment of about $80 billion.

Low-income communities. The bill would invest more than $60 billion to support low-income and communities of color that are disproportionately burdened by climate change. This includes subsidies for zero-emission technology, as well as money to mitigate the negative effects of highways and other transportation facilities.

Fossil fuel industry. The bill would require the federal government to auction more public space for oil drilling and expand tax credits for coal and gas-burning plants that rely on carbon capture technology. These provisions are among those added to gain the support of West Virginia Democrat Senator Joe Manchin III.

Passing the legislation would close a grueling piece of negotiations for Democrats. For more than a year, they worked to find a compromise that could not only appease a left wing eager to enact a comprehensive plan that would change the nation’s social safety net, but also secure the votes of major centrist holdouts reluctant to back billions in new spending as inflation soared.

The bill falls far short of the $2.2 trillion Build Back Better Act, which Ms. Pelosi tried to pass in the House in November. That bill included much more sweeping changes to the tax code, as well as billions of dollars to create a federal paid leave program, provide support for most families with children, and expand housing, home health care and public education. It faltered in the Senate a month later, when West Virginia Senator Joe Manchin III, a centrist Democrat, dismissed it as exorbitant and walked away from the talks.

But the final product, dubbed the Inflation Reduction Act, is a major victory for Democrats just months before they defend their slim majority in Congress in November’s midterm elections. In her letter, Ms. Pelosi acknowledged that several priorities had been scrapped to put together a narrower package and vowed that “we must never give up on that fight — and that we will continue it in future legislation.”

At one point, when talks between Mr. Manchin and New York’s Majority Leader Chuck Schumer faltered last month, Democrats grappled with the prospect of issuing just one health package. Once a deal was struck with climate priorities and some tax hikes, they rallied behind the plan.

“While we are heartbroken to see several vital pieces about the healthcare economy, housing and immigration left on the cutting floor — as well as a successful Republican effort to remove insulin price caps for those with private insurance — we know that the Inflation Reduction Act takes real steps forward on key progressive priorities,” Washington Representative Pramila Jayapal, the chair of the Congressional Progressive Caucus, said in a statement after the Senate passed the measure.

Some centrist Democrats, especially those from high-income states who had threatened to withhold their vote if legislation didn’t cap how much families can deduct in state and local taxes, also announced their support.

“Because this legislation does not increase taxes for families in my district, but in fact significantly lowers their costs, I will vote for it,” said New Jersey Democrat Mikie Sherrill, Representative.

Its approval comes just days after Mr. Biden signed both a $280 billion industrial policy bill that will support U.S. chip manufacturing in an effort to better compete with China, and legislation that will expand medical benefits for veterans exposed. to waste fires burning on military legal bases, the latest in a string of legislative successes.

While Republicans were unanimously against the package, Democrats used the accelerated fiscal reconciliation process to push legislation through both chambers, as they did with the $1.9 trillion pandemic aid package last year. Completely removed from the process, Republicans were outraged that the bill did little to address inflation and criticized plans for tax hikes and increased federal spending. (Many economists agree that it will likely dampen inflation, albeit modestly and not immediately.)

“Having received a ‘take it or leave it’ offer from the Senate Democrats, with no opportunity to provide input or amend the bill, I am appalled that the majority is once again choosing to just pass it.” Oklahoma Representative Tom Cole, the top Republican on the House Rules Committee, at a hearing Wednesday. He added, “It should come as no surprise that no Republican will vote for this bill, just as no Republican voted for the latest reconciliation bill.”

Republicans have partly trained their anger on a proposal to invest $80 billion in the Internal Revenue Service. Democrats say it will bolster the historically underfunded agency and help crack down on wealthy tax evaders and corporations, but Republicans have branded it a heavy-handed attack on lower and middle class taxpayers. In response to the criticism, Janet L. Yellen, the Secretary of the Treasury, this week instructed the agency to ensure there is no increase in audits for small businesses or families earning less than $400,000.

Others scoffed at the fact that not the entire House would be present to vote on the legislation. As of Friday morning, more than a third of House lawmakers had filed the necessary paperwork to vote by proxy — a practice put in place to prevent the spread of the coronavirus, declaring “the ongoing public health emergency”. cited as a reason for not being able to vote personally.

“This proxy ‘vote’ – based on a lie by most involved (signing that it is COVID related) will be used (unlawfully) to pass tax hikes, harmful energy regulations, fund IRS agents to harass citizens , and a massive increase in ‘big healthcare’ favoritism,” Texas Republican Rep. Chip Roy said: on Twitter.

The package will help the Biden administration deliver on its pledge to roughly halve emissions by 2030, although scientists and climate activists warn that more congressional and executive action will be needed to meet that goal. It is intended to use the tax code to encourage consumers and businesses to purchase and invest in electric vehicles, solar panels, and other renewable energy sources such as wind or solar power, as well as the facilities needed to produce more of these items. build your own country.