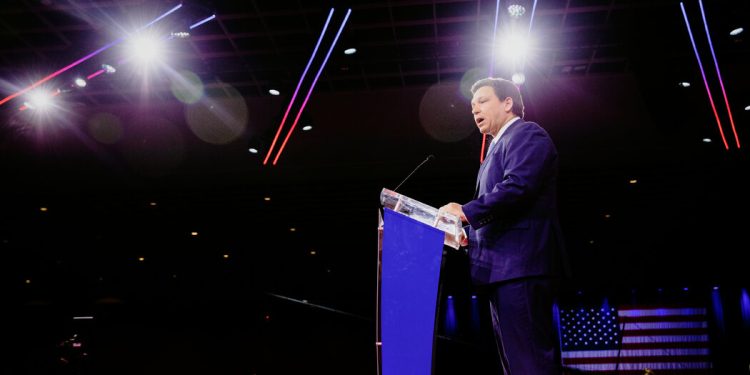 Not long ago, such a shift seemed out of the question in a state notorious for its tight election margins and nail-biting recounts. Mr. DeSantis won the governorship by about 32,000 votes in 2018, barely a mandate. His aloof personality didn’t exactly sparkle.

But as of 2020, a politically attuned Mr. DeSantis seized on discontent over coronavirus pandemic policies, figuring that long-term economic prosperity and individual freedoms would be more important to voters than protecting public health. More than 73,000 Floridians have died from Covid-19, but polls have shown that Mr. DeSantis and many of his policies remain quite popular.

Parents, in particular, who have welcomed the governor’s opposition to Covid-19 restrictions in schools, have remained active on curriculum and culture.

The question for Mr. DeSantis — and pretty much everyone else in Florida — is whether the uproar to the right will stop, either through court intervention, corporate backlash or, in November, electoral reprimand. But given the trends in Florida in recent years, the most likely outcome could be an ongoing campaign toward a new, more rigidly conservative orthodoxy, one that voters could very well ratify this fall.

The state’s rapid and unexpected tilt to the right has happened as Florida has swelled with new residents. Between July 2020 and July 2021, approximately 260,000 more people arrived than departed, a net migration higher than any other state. The trend started before the pandemic but appeared to be accelerating as homeworkers sought warm weather, low taxes and few public health restrictions.

Culturally, Floridians are less conservative than their leaders. They voted by wide margins to legalize medical marijuana, ban gerrymandering and restore criminals’ voting rights. (Last year, Republican lawmakers put limits on the use of such citizen-led voting initiatives.) Thus, the recent flood of legislation has been met with trepidation in the state’s major cities, nearly all of which are controlled by Democrats.