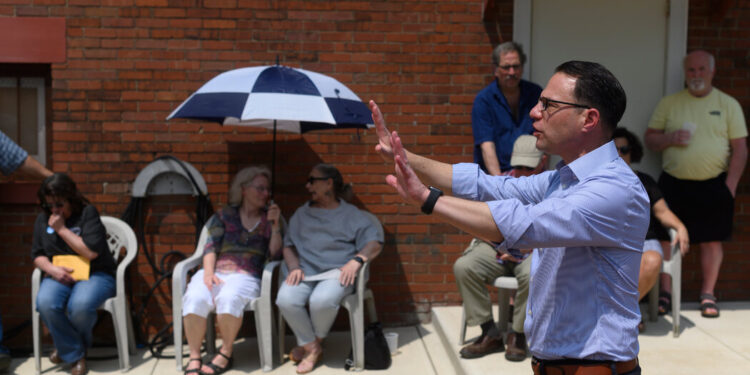 Josh Shapiro, the newly nominated Democratic nominee for governor in Pennsylvania, defended a television ad he ran on Sunday that appeared to boost the reputation of the Republican rival he will meet in November — a man who considers Shapiro the most extreme candidate in the country. named for governor.

The ad is part of a long-cherished strategy among campaign tacticians: elevate your most extreme rival and remove disaffected moderates from that rival’s party in November. Last week, Axios noted that the turnout of far-right Trump-aligned candidates could test this theory, and that Democrats are “trying to drive the turnout of ultra-MAGA candidates they believe are easier to beat in general elections.”

But in today’s highly polarized environment, where party affiliation is deeply intertwined with people’s sense of identity, that strategy can backfire, as many Democrats were shocked to discover in 2016.

During the Republican primaries in Pennsylvania, Mr. Shapiro, the state’s attorney general, ran an ad calling state senator Doug Mastriano “one of Donald Trump’s strongest supporters.” The ad went on to say that Mr Mastriano “wants to end the voting by post. He led the fight to control the 2020 elections. If Mastriano wins, that’s a win for what Donald Trump stands for.”

On Sunday, DailyExpertNews host Dana Bash asked Mr. Shapiro whether it was “irresponsible” to boost a candidate like Mr. Shapiro “because you think you can beat him.”

It wasn’t, Mr. Shapiro said. For weeks, Mr. Mastriano led the crowded Republican field, according to public and private polls, and Mr. Shapiro, who was uncontested for the Democratic nomination, said he was keen for voters to understand the choice they would soon be presented with.

“What we did was start the general election campaign and demonstrate the clear contrast, the big differences between him and me,” said Mr. Shapiro.