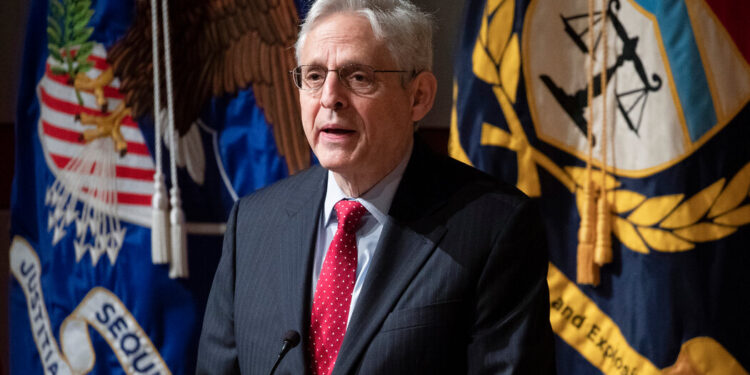 WASHINGTON — Attorney General Merrick B. Garland has revised rules governing the use of force by law enforcement agencies overseen by the Department of Justice, requiring federal agents to intervene when they see officials using excessive force or mistreating people in custody.

The rule change was circulated Friday and posted on the department’s website Monday — two days before the second anniversary of the death of George Floyd, who died under the knee of a Minneapolis police officer as other officers watched.

“It is the Justice Department’s policy to value and preserve human lives,” Mr Garland wrote in the four-page memo. “Officers may only use force that is objectively reasonable to effectively bring an incident under control, while protecting the safety of the officer and others.”

The changes represent the first revision of the department’s use of force policy in 18 years. It now requires officers to “recognize the affirmative duty and act to intervene to prevent or stop, as appropriate, an officer of excessive force or any other use of force contrary to the Constitution, other federal laws.” or the policy of departments on the reasonable use of the force.”

The existence of the memo was previously reported by The Washington Post.

The new rules will apply to the entire workforce of the Department of Justice, including agents and officers from the FBI, the Drug Enforcement Administration, the US Marshals Service, the Federal Bureau of Prisons and the Bureau of Alcohol, Tobacco, Firearms and explosives.

The department does not have the authority to impose the requirements on local law enforcement or sheriff’s departments, although the Biden administration plans to use the document as a template for posting.

The rules on the use of force, rewritten in consultation with civil rights groups after Floyd’s murder, also draw heavily on the National Consensus Policy on Use of Force, which was drafted by 11 major law enforcement groups representing federal, state and local law enforcement. officers.

Other provisions include a ban on firing a weapon at a moving vehicle for the sole purpose of stopping it, and firing a warning shot “outside the prison context”.

The new memo is much more explicit and prescriptive than previous guidelines on the rights and physical well-being of people pursued in connection with crimes or taken into federal custody.

Federal officers not only have a responsibility to stop police brutality, but now also have “an affirmative duty to seek and/or provide medical assistance, as appropriate, as needed,” according to the guidelines.

Four suspects. Along with Mr Chauvin, three other officers were charged with playing a part in Mr Floyd’s death. Tou Thao, an experienced officer who was Mr Chauvin’s partner, stopped a group of bystanders. J. Alexander Kueng and Thomas Lane helped locate Mr. Floyd. The four men have been involved in various proceedings.

The Department of Homeland Security, which is not controlled by the Department of Justice, introduced a similar rule in 2018, advising its employees to seek medical attention “as soon as possible after the use of force and the end of any perceived threat to the public safety.”

The Justice Department memo is one in a series of actions taken by the Biden administration in the wake of Mr Floyd’s death and several other episodes of police brutality.

In April 2021, Mr. Garland launched an extensive investigation into the patterns, practices and culture of the Minneapolis Police Department after former Officer Derek Chauvin was found guilty of the murder of Mr. Floyd.

“Nothing can fill the void that George Floyd’s loved ones have felt since his death,” Garland said at the time. “My heart goes out to them and to everyone who has experienced a similar loss.”